Ned Kahn is a popular and prolific artist from Northern California (Sebastapol), who creatively replicates the forms and forces of nature.

The range of his work is astonishing as it is worldwide.  Popular with leading international architects, Kahn’s artistic portfolio, for example, includes the “Rain Oculus” in Singapore.


The creative “Rain Oculus” was installed in 2010-11 at the Marina Sands Resort/Casino and commercial complex in Singapore.  When a large whirlpool forms inside a 70-foot diameter acrylic bowl, it drains and falls two stories to a pool below that creates another water feature—only this time in the shopping center.

The artwork, a collaboration with architect Moshe Safdie, functions as both a skylight and a rain collector. Rain water is recycled back to the whirlpool and also fills a canal that runs through the atrium. The pumps that direct water into the bowl are turned on and off a few times an hour so the whirlpool is always changing in shape and intensity. At peak flow rates there are 8000 gallons per minute falling through the atrium and 200 tons of water swirling around in the bowl.

Extensive prototyping and engineering went into integrating the artwork into the structural and mechanical systems of the building. Completed in 2011.

“Rain Oculus,” to this writer, is a metaphor for the continual albeit brief rain showers that occur all the time in Singapore and the whirlpool is significant by showing the direction of whirlpool (drain) water flow.  Because Singapore sits only a few miles north (2 degrees latitude) of the equator the water flows in the direction shown in the video link:  http://nedkahn.com/portfolio/rain-oculus-video/

Interestingly, if the art installation had been built only a few miles south of Singapore on the other side of the equator, the direction of the water flow in the whirlpool would flow in the opposite

MORE ON MARINA SANDS PROJECT
By Wikipedia--Marina Bay Sands is an integrated resort fronting Marina Bay in Singapore. Developed by Las Vegas Sands, it is billed as the world's most expensive standalone casino property at $8 billion in Singapore dollars, including the land cost. 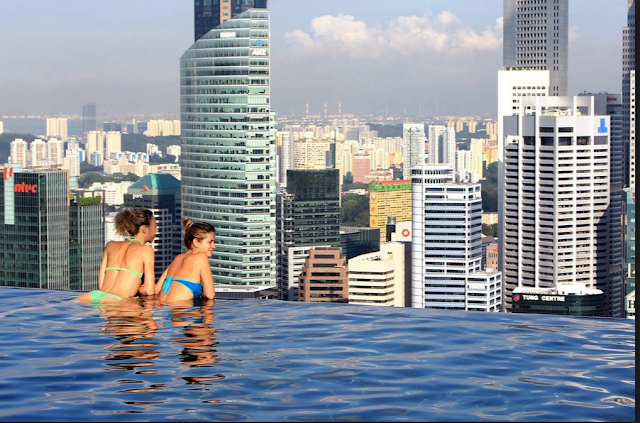 The complex is topped by a 340-metre-long (1,120 ft) SkyPark with a capacity of 3,900 people and a 150 m (490 ft) infinity swimming pool, set on top of the world's largest public cantilevered platform, which overhangs the north tower by 67 m (220 ft). The 20-hectare resort was designed by Moshe Safdie architects. The architect was Aedas,[8] and they were responsible for employing all local consultants and for developing, co-ordinating and implementing the design. Engineering was provided by Arup and Parsons Brinkerhoff (MEP). The main contractor was Ssangyong Engineering and Construction.

Marina Sands Resort and SkyPark were officially opened on June, 23 and 2010 as part of a two-day celebration, following the casino's opening on April 27, 2010.

The SkyPark opened the following day. The theatres were completed in time for the first performance of Riverdance on  November 30. The indoor skating rink, which uses artificial ice, opened to a performance by Michelle Kwan on December 18. The ArtScience Museum opened to the public and the debut of a 13-minute light, laser and water show called Wonder Full on February 19, 2011 marked the full completion of the integrated resort.

The official grand opening of Marina Bay Sands was held on February 2011.

In the 2016 movie Independence Day: Resurgence, the property is shown to be destroyed by alien spacecraft.