Editor’s note:  The world’s tallest Ferris aka Observation Wheels are currently under construction. They are located in the U.S., where such big wheels were invented (1893) and in Dubai.  To celebrate, this millennium’s world wide fascination with giant observation wheels, this blog is launching a year long series of monthly posts on Ferris Wheels from around the World.  We started [Pillar to Post blog July 20, 2016]  in Chicago, where a 33 year old engineer George Washington Ferris invented and had built the world’s first Ferris Wheel in 1893.  Each following month we’ll spotlight another Ferris Wheel somewhere else in the world.  This month we’re in Dubai.

THE DUBAI EYE: THE BIGGEST WHEEL YET
Dubai, the vibrant metropolis of more than two million is a portal to the future.  Stunning architecture abounds in this capital city of the United Arab Emirates.  So with so much happening here that is bigger and better why shouldn’t this City’s in the works Ferris Wheel be less spectacular?

Destined for a 2017 debut, the “Dubai Eye” is reaching toward the stars to become easily the world’s tallest giant observation wheel.  At a phenomenal 689 feet, the Dubai Eye easily will outgrow the about-to-be completed the U.S. Staten Island Ferris Wheel, which will top out at 630 feet when completed in early 2017.  By comparison, the tallest giant observation wheels currently in operation are the Singapore Flyer is 541 feet tall; The Las Vegas High Roller is 550 feet.  By 2017, these giants will no longer be the tallest thanks to Dubai’s multi-billion construction project, which includes a mega-acre manmade island just off the coast of Dubai. 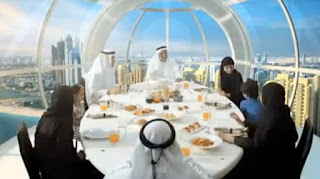 Dubai Eye will make one revolution every 48 minutes and will be able to carry 1,400 persons at a time in 48 luxury glass capsules.