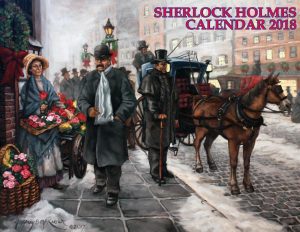 A Strand Magazine, a modern version of the magazine that first published Sherlock Holmes fiction back in the 1890s, is offering for holiday giving a glossy Sherlock Holmes Calendar – 2018.

Also, the calendar offers Sherlock Holmes in the old Strand Magazine with magazine covers of the legendary magazine, and the exclusive “Flowers for Mrs. Hudson” painting by Jeffrey McKeever.

The quotes and trivia section looks at everything from the day that Sherlock Holmes was born to the publication dates of several short stories and novels.
The calendar is printed on heavy card stock and is coil bound which means that it’ll open smoothly and will better resist tearing.

PillartoPost.org acknowledges the Strand Magazine staff is honest and forthright and we’ve never had a problem receiving merchandise from them, however try as the might they are often tardy in deliveries because of third-party vendors.  As a back up for Xmas giving we suggest having a back cup card saying the calendar is on the way.