San Diego-based White Labs is well known worldwide for its expertise in yeast used in the manufacture of beer, wine and other libations, but starting tomorrow, it will take its work with edible-based fermentation to the people when it opens its first-ever restaurant, White Labs Kitchen and Tap in downtown Asheville, North Carolina. 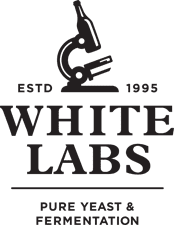 White Labs debuted at its East Coast digs in January of this year, with the establishment of a full-scale laboratory and yeast-production facility complete with a tasting room similar to that of its San Diego predecessor, elements of which—such as hanging Erlenmeyer flask light fixtures—will be on display at the company’s new 5,200-square-foot eatery.

Like White Labs’ sampling venues, multiple versions of singular beers produced by the company (via the in-house brewery at the San Diego facility) and differentiated by the type of yeast used to ferment them will be available side-by-side. Doing so allows patrons to taste the significant influence yeast has on a finished beer. A portion of White Labs Kitchen and Tap’s 28 taps will dispense those house ales and lagers while a rotating stock of guest beers (including collaboration creations worked up by neighbor breweries including Burial Beer Co., Hi-Wire Brewing and Mad Co. Brewing specifically for the restaurant’s opening) will round out the beverage program along with wine and specialty cocktails.

The restaurant’s total square-footage is divided into 3,000 indoors with an outdoor patio coming in at roughly 2,200. Up to 100 guests at a time may partake from an eclectic menu that focuses heavily on dishes incorporating fermented components.

The most obvious of them are wood-fired pizzas produced using slow-risen dough made using White Labs pure liquid yeast cultures. Then there are French fries brined in lactobacillus and bread made with WLP830 German Lager Yeast. Other adventurous accouterments include a sour-beer vinaigrette on a kale salad, whey toffee, and a burger-topping barbecue sauce incorporating barley miso and White Labs’ Pasteur Porter ale slathered on a roll made with WLP002 English Ale Yeast. It’s anything but your everyday take on everyday food.

White Labs Kitchen and Tap is located adjacent from the company’s Asheville facility at 172 South Charlotte Street. Should you find yourself in that easterly locale and looking for a taste of home, its hours are 11:30 a.m. to 9 p.m., Sunday through Thursday and 11:30 a.m. to 10 p.m., Fridays and Saturdays.