Excerpt from “A Christmas Carol” by Charles Dickens
In the public domain, presented by www.ProjectGutenberg.com

The Ghost of Christmas past stopped at a certain warehouse door, and asked Scrooge if he knew it.

“Know it!” said Scrooge. “Was I apprenticed here!”

They went in. At sight of an old gentleman in a Welsh wig, sitting behind such a high desk, that if he had been two inches taller he must have knocked his head against the ceiling, Scrooge cried in great excitement:

Old Fezziwig laid down his pen, and looked up at the clock, which pointed to the hour of seven. He rubbed his hands; adjusted his capacious waistcoat; laughed all over himself, from his shoes to his organ of benevolence; and called out in a comfortable, oily, rich, fat, jovial voice:

Scrooge’s former self, now grown a young man, came briskly in, accompanied by his fellow-’prentice.  “Dick Wilkins, to be sure!” said Scrooge to the Ghost. “Bless me, yes. There he is. He was very much attached to me, was Dick. Poor Dick! Dear, dear!”

“Yo ho, my boys!” said Fezziwig. “No more work to-night. Christmas Eve, Dick. Christmas, Ebenezer! Let’s have the shutters up,” cried old Fezziwig, with a sharp clap of his hands, “before a man can say Jack Robinson!” 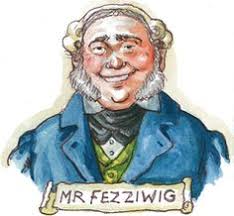 You wouldn’t believe how those two fellows went at it! They charged into the street with the shutters—one, two, three—had ’em up in their places—four, five, six—barred ’em and pinned ’em—seven, eight, nine—and came back before you could have got to twelve, panting like race-horses.

“Hilli-ho!” cried old Fezziwig, skipping down from the high desk, with wonderful agility. “Clear away, my lads, and let’s have lots of room here! Hilli-ho, Dick! Chirrup, Ebenezer!”

Clear away! There was nothing they wouldn’t have cleared away, or couldn’t have cleared away, with old Fezziwig looking on. It was done in a minute. Every movable was packed off, as if it were dismissed from public life for evermore; the floor was swept and watered, the lamps were trimmed, fuel was heaped upon the fire; and the warehouse was as snug, and warm, and dry, and bright a ball-room, as you would desire to see upon a winter’s night.

In came a fiddler with a music-book, and went up to the lofty desk, and made an orchestra of it, and tuned like fifty stomach-aches. In came Mrs. Fezziwig, one vast substantial smile. In came the three Miss Fezziwigs, beaming and lovable. In came the six young followers whose hearts they broke.

In came all the young men and women employed in the business. In came the housemaid, with her cousin, the baker. In came the cook, with her brother’s particular friend, the milkman. In came the boy from over the way, who was suspected of not having board enough from his master; trying to hide himself behind the girl from next door but one, who was proved to have had her ears pulled by her mistress. In they all came, one after another; some shyly, some boldly, some gracefully, some awkwardly, some pushing, some pulling; in they all came, anyhow and everyhow.

Away they all went, twenty couple at once; hands half round and back again the other way; down the middle and up again; round and round in various stages of affectionate grouping; old top couple always turning up in the wrong place; new top couple starting off again, as soon as they got there; all top couples at last, and not a bottom one to help them!

When this result was brought about, old Fezziwig, clapping his hands to stop the dance, cried out, “Well done!” and the fiddler plunged his hot face into a pot of porter, especially provided for that purpose. 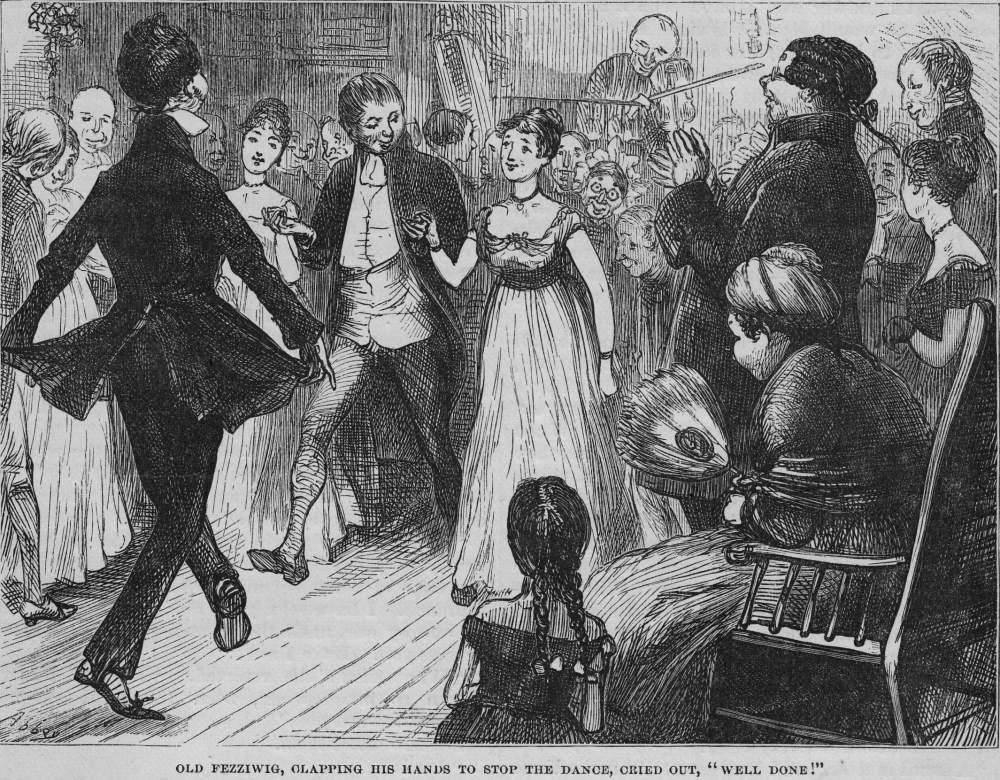 But scorning rest, upon his reappearance, he instantly began again, though there were no dancers yet, as if the other fiddler had been carried home, exhausted, on a shutter, and he were a bran-new man resolved to beat him out of sight, or perish.
There were more dances, and there were forfeits, and more dances, and there was cake, and there was negus, and there was a great piece of Cold Roast, and there was a great piece of Cold Boiled, and there were mince-pies, and plenty of beer.
But the great effect of the evening came after the Roast and Boiled, when the fiddler (an artful dog, mind! The sort of man who knew his business better than you or I could have told it him!) struck up “Sir Roger de Coverley.”
Then old Fezziwig stood out to dance with Mrs. Fezziwig. Top couple, too; with a good stiff piece of work cut out for them; three or four and twenty pair of partners; people who were not to be trifled with; people who would dance, and had no notion of walking.


But if they had been twice as many—ah, four times—old Fezziwig would have been a match for them, and so would Mrs. Fezziwig. As to her, she was worthy to be his partner in every sense of the term. If that’s not high praise, tell me higher, and I’ll use it. A positive light appeared to issue from Fezziwig’s calves. They shone in every part of the dance like moons. You couldn’t have predicted, at any given time, what would have become of them next.

And when old Fezziwig and Mrs. Fezziwig had gone all through the dance; advance and retire, both hands to your partner, bow and curtsey, corkscrew, thread-the-needle, and back again to your place; Fezziwig “cut”—cut so deftly, that he appeared to wink with his legs, and came upon his feet again without a stagger.

When the clock struck eleven, this domestic ball broke up. Mr. and Mrs. Fezziwig took their stations, one on either side of the door, and shaking hands with every person individually as he or she went out, wished him or her a Merry Christmas. When everybody had retired but the two ’prentices, they did the same to them; and thus the cheerful voices died away, and the lads were left to their beds; which were under a counter in the back-shop.

During the whole of this time, Scrooge had acted like a man out of his wits. His heart and soul were in the scene, and with his former self. He corroborated everything, remembered everything, enjoyed everything, and underwent the strangest agitation. It was not until now, when the bright faces of his former self and Dick were turned from them, that he remembered the Ghost, and became conscious that it was looking full upon him, while the light upon its head burnt very clear.
“A small matter,” said the Ghost, “to make these silly folks so full of gratitude.”

The Spirit signed to him to listen to the two apprentices, who were pouring out their hearts in praise of Fezziwig: and when he had done so, said,

“Why! Is it not? He has spent but a few pounds of your mortal money: three or four perhaps. Is that so much that he deserves this praise?”

“It isn’t that,” said Scrooge, heated by the remark, and speaking unconsciously like his former, not his latter, self. “It isn’t that, Spirit. He has the power to render us happy or unhappy; to make our service light or burdensome; a pleasure or a toil. Say that his power lies in words and looks; in things so slight and insignificant that it is impossible to add and count ’em up: what then? The happiness he gives, is quite as great as if it cost a fortune.”

He felt the Spirit’s glance, and stopped.

“What is the matter?” asked the Ghost.

“Nothing particular,” said Scrooge.
“Something, I think?” the Ghost insisted.

“No,” said Scrooge, “No. I should like to be able to say a word or two to Bob Cratchit, my clerk just now. That’s all.”

His former self turned down the lamps as he gave utterance to the wish; and Scrooge and the Ghost again stood side by side in the open air.