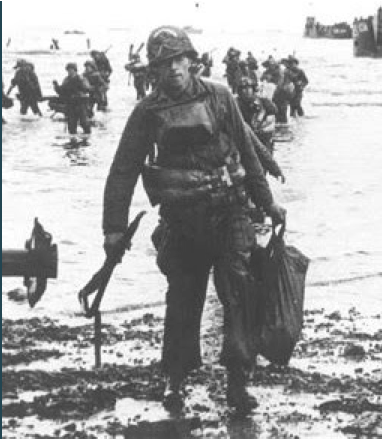 Well known short story writer and novelist, J.D. Salinger slogged ashore **on Utah Beach (D-Day, June 6, 1944) carrying his carbine and a sack believed to hold a portable typewriter.  The author of “The Catcher in the Rye,” U.S. Army Sergeant Jerry Salinger, admitted that he carried ashore early chapters of what would become his 1951 best seller and worked on the iconic novel during the war and post-war service time.

Writing in Vanity Fair magazine, Kenneth Slawenski in an adaptation from his “Salinger” biography tells of army sergeant, Jerry Salinger hitting the beach on D-Day; drinking with Hemingway in newly liberated Paris, and marching into concentration camps.  All of that time, Holden Caufield, the hero of “The Catcher in the Rye” was with him.  Slawenski reveals how the war changed both Holden Caufield and his creator following D-Day.   Click here for the article.