URBAN EXPLORER / ARE WE GETTING CLOSER TO HAVING A TROLLEY CONNECT TO SAN DIEGO INTERNATIONAL?

Why the trolley doesn’t connect to San Diego’s airport is one of the most frequent questions we field from Voice of San Diego readers.

But, as Andrew Keatts reports, San Diego Mayor Kevin Faulconer and SANDAG chief Hasan Ikhrata are pitching a new vision that would finally let people take transit to the airport.

Dubbed “San Diego Grand Central,” their plan would utilize the current SPAWAR site and “would combine 70 acres of Navy property with the Old Town Transit Center. Trolley, Coaster and bus riders could take a rail-based people mover, possibly through a tunnel running under the naval base and airport runway, though they’re considering above-ground options as well,” Keatts writes.

Though the plan certainly moves the needle after decades of talk, one thing that’s still not clear is how it would all be paid for.

“It’s going to cost money,” Ikhrata said. “I believe there is the greatest potential for a public-private partnership. The airlines will be a big partner when it comes to financials, some private entities that are interested in having their systems there, some private developers who are interested in developing there. But no question about it, SANDAG will have to pay their fair share.” 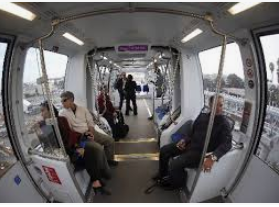