SAVE THE DATE / MARSTON HOUSE HOSTS OF 3 SOHO LECTURES

The popular Saturday morning series, now in its second year, takes place this spring and fall on the warm, red-brick tile terrace of the 1905 Marston House, one of California’s finest remaining Arts and Crafts homes. Knowledgeable, engaging experts will address fascinating topics that complement SOHO’s historic preservation goals and accomplishments over five decades, and look to the future. The talks are from 11am to 12:30pm; tickets cost $10 per person and include light refreshments.  Info: (619) 297-9327

1. On April 6, the Terrace Talk will cover “Protecting the People’s Park for Over a Century: Generations of San Diegans Fighting to Preserve Balboa Park.” As far back as 1871, George Marston led protective efforts, and before the 1915-16 Panama-California Exposition closed, citizens were organizing to save the “temporary” buildings and gardens. This discussion takes on added relevance with the recent announcement that the massive Plaza de Panama project for the park’s historic core is now on hiatus.

Nancy Carol Carter, an expert and author on Balboa Park horticulture and Kate Sessions, the nurserywoman and horticulturist who helped transform a dusty mesa into San Diego’s crown jewel, will present the history of the People’s Park from 1870 to 1915. Mike Kelly, president since 2006 of The Committee of One Hundred—a nonprofit group that preserves Balboa Park’s historic architecture, gardens, and public spaces—will summarize the history from 1915-1940. Urban designer and planner Howard Blackson, who helped remove the parked cars from the Plaza de Panama and revitalize it for pedestrians, will tell the park’s story from 1940 to the present. Judy Swink, a former librarian who became familiar with Balboa Park history while working for the civic group C-3, and also served on the Balboa Park Committee, will serve as moderator.
Tickets: click here. 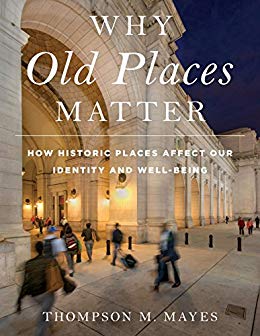 2. On May 11, Why Old Places Matter will be discussed by three long-time SOHO leaders informed by a recent book of the same name and subtitled “How Historic Places Affect Our Identity and Well-Being.” As author Thompson M. Mayes of the National Trust for Historic Preservation notes, we may not always see past bricks, mortar, and the significant people and events they contained, but historic buildings and sites play a major role in the social, psychological, and emotional fabric of our complex culture and enrich our quality of life, as individuals and collectively.

Panelists include Jaye MacAskill, SOHO’s immediate past president and a researcher and historical consultant; Dan Soderberg, maker of SOHO’s award-winning documentary “Four Decades of Historic Preservation in San Diego County” and a board member; and David Swarens, also a board member who twice served as president and who helped create two large historic districts in the City of San Diego. Each speaker will illustrate the book’s concepts, using examples from SOHO’s preservation efforts over 50 years. The concepts include memory, continuity, beauty, ancestors, creativity, community, and sustainability. Amie Hayes, SOHO’s Historic Resources Specialist, will moderate the panel.
Tickets: click here.

3. On September 28, the Terrace Talk will feature Trailblazing Women Architects of California.

Sarai Johnson of Johnson & Johnson Architecture is a Marston House historian and the site’s former manager for nine years. She will discuss San Diego’s first woman architect, Hazel Wood Waterman, who apprenticed with Irving Gill, the region’s leading modernist, and went on to design buildings on her own. Ione R. Stiegler, FAIA, leads her own preservation architecture firm, now in its 30th year, and received the first American Institute of Architects California Council Distinguished Practice Award for preservation. She will talk about Julia Morgan, the famed architect of Hearst Castle at San Simeon, Asilomar conference center, and the Fairmont Hotel in San Francisco. Morgan was the first woman to become a licensed architect in California. Diane Welch is the author of two seminal books on architect Lilian J. Rice, and she will recount how Rice planned and designed much of Rancho Santa Fe and created many custom homes there. Moderator Jennifer Macdonald is an architect specializing in historic preservation and a Marston House docent.
Tickets: click here.

ABOUT THE MARSTON HOUSE.
The Marston House Museum & Gardens, 3525 Seventh Ave., is listed on the National Register of Historic Places. Tours of the elegant, two-story home filled with period furnishings and plein air paintings require separate admission. Tours are available Friday through Sunday from 10 a.m. to 5 p.m. and include “The Marston Legacy: Progress and Preservation,” a permanent exhibit organized by SOHO that pays tribute to this leading family’s many enduring contributions to San Diego. For more information, please visit www.SOHOsandiego.org or call (619) 297-9327.

Through education, advocacy, and stewardship SOHO's mission is to preserve, promote, and support preservation of the architectural, cultural, and historical links and landmarks that contribute to the community identity, depth, and character of our region.