KOLSHITSKY & THE FIRST BLUE BOTTLE
The apocryphal tale goes like this: In the late 1600s, the Turkish army swept across much of Eastern and Central Europe, arriving at Vienna in 1683. Besieged and desperate, the Viennese needed an emissary who could cross Turkish lines to get a message to nearby Polish troops. Franz George Kolshitsky, who spoke Turkish and Arabic, took on the assignment disguised in Turkish uniform. After many perilous close calls, Kolshitsky completed his valiant deed, delivering news of the Poles’ imminent rescue to Vienna.

Soon, the Turks were repelled from the city, leaving everything they brought, including strange bags of beans, which were thought to be camel feed. Kolshitsky, having lived in the Arab world for several years, knew these to be bags of coffee. Using money bestowed on him by the mayor of Vienna, Kolshitsky bought the coffee and opened Central Europe’s first-ever coffee house (The Blue Bottle), bringing coffee to a grateful Vienna.

319 YEARS LATER
In 2002, in Oakland, California, James Freeman, a slightly disaffected freelance musician and coffee lunatic, weary of the commercial coffee enterprise and stale, overly roasted beans, decided to open a roaster for people who were clamoring for the actual taste of fresh coffee. Using a minuscule six-pound batch roaster, he made a historic vow: “I will only sell coffee less than 48 hours out of the roaster to my guests, so they may enjoy coffee at peak flavor. I will only use the finest, most delicious, and responsibly sourced beans.” 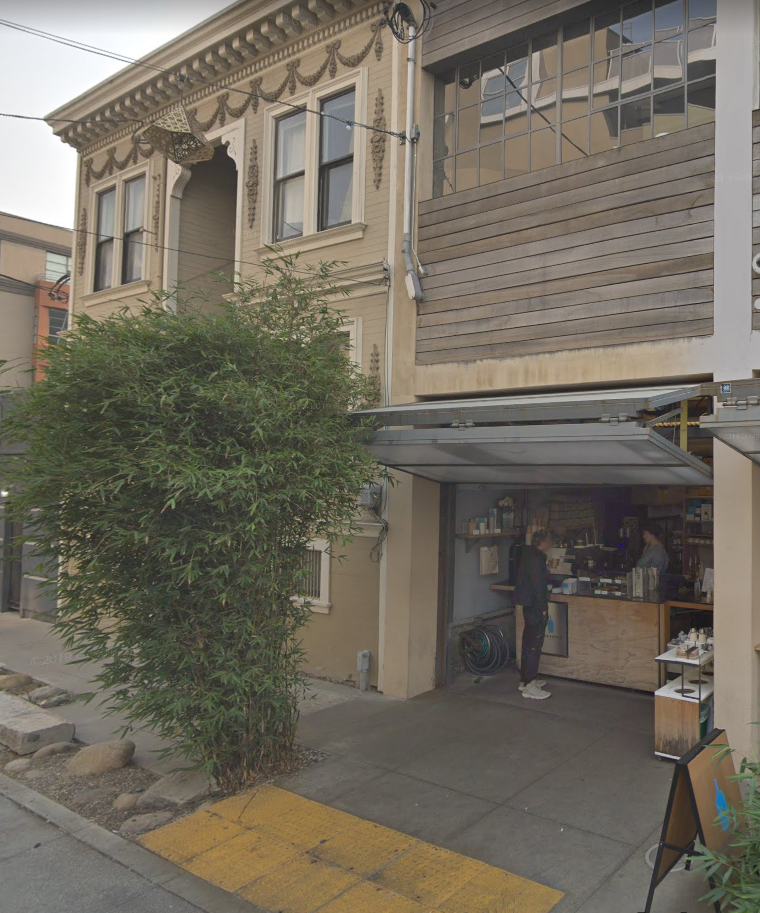 Before Freeman opened his roaster in Oakland, he started it all from a coffee cart located on Linden Street (above) in the Hayes Valley section of San Francisco.  In a recent interview with 99U, Freeman said the cart is “still there.”  PillartoPost.org on a recent visit to San Francisco looked for Freeman’s cart.  Tucked away on Linden Street (just off of Gough) there is a Blue Bottle Café. It’s not a cart anymore but a small Euro-style garage turned to take out coffee stand.  Why would haute design Blue Bottle pick such a simple alley location?  Now you know.  It’s the founder’s Rosetta stone.

The 99U article (click here) is significant in that it explains, the founder’s aesthetic regarding the design of the Blue Bottle locations worldwide.  He didn’t want anything to distract from the coffee experience.  He also called on his music background to explain why the company has never had a master plan.  “There’s no Mozart in coffee,” Freeman told 99U.  “Coffee making is not an art...if you make a bad cup of coffee you simply do it over.”

In honor of Kolshitsky’s heroics, Freeman named his business Blue Bottle Coffee and began another chapter in the history of superlative coffee.

Now, more than 17 years later, and thanks to the enthusiastic support of many loyal guests, Blue Bottle Coffee has grown to a network of cafes across the U.S. and in Japan.

Still headquartered in Oakland, the company sold a majority stake to Nestle in 2017.  It remains one of the bigger roaster/retail players in the third wave coffee movement, which embraces single-origin beans.

While San Diego’s initial Blue Bottle is strictly minimalist in line with its company look, blue spot creatives have selected statement sites for many of its cafes.

San Diego’s Blue Bottle is sited in a new mall while it has cafes located in the historic San Francisco Ferry Building and downtown LA’s steampunkish Bradbury Building.