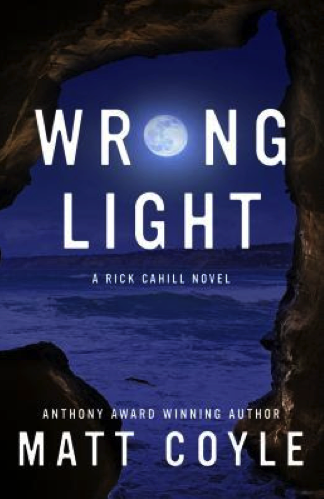 Award-winning local crime novelist Matt Coyle will be at The Book Catapult to discuss and sign his new novel, Wrong Light on Thursday, April 18 at 7:30pm. Matt will be in conversation with San Diego radio host and podcaster, Jeff Dotseth. (This event has been rescheduled from January.)

Wrong Light is the next in a series of adventures with La Jolla-based private investigator Rick Cahill.  The novel begins with
Naomi Hendrix’s sexy voice hovering over the radio waves, but that isn’t the only thing haunting the Southern California nights.

A demented soul is stalking Naomi, hiding in the shadows of the night, waiting for the right moment to snatch her and fulfill a twisted fantasy. When Naomi’s radio station hires PI Rick Cahill to protect Naomi and track down the stalker, he discovers that Naomi is hiding secrets about her past that could help unmask the man. However, before Rick can extract the truth from Naomi, he is thrust into a missing person’s case—an abduction he may have unwittingly caused.

The investigating detective questions Rick’s motives for getting involved and pressures him to stop meddling. While Rick pursues Naomi’s stalker and battles the police, evil ricochets from his own past and embroils Rick in a race to find the truth about an old nemesis. Is settling the score worth losing everything?

ABOUT THE AUTHOR. Matt Coyle is the author of the best-selling Rick Cahill crime novels. He knew he wanted to be a crime writer when he was fourteen and his father gave him the Simple Art of Murder by Raymond Chandler. He graduated with a degree in English from University of California at Santa Barbara. His foray into crime fiction was delayed for 30 years as he spent time managing a restaurant, selling golf clubs for various golf companies, and in national sales for a sports licensing company.

Writing at night for over a decade his debut novel, Yesterday’s Echo, was finally published in 2013. The wait was almost worth it as it won the Anthony Award for Best First Novel, the San Diego Book Award for Best Mystery, the Ben Franklin Award for Best New Voice in Fiction.

Matt’s second book, Night Tremors, was a Bookreporter.com Reviewers’ Favorite Book of 2015 and was an Anthony, Shamus, and Lefty Award finalist.

Dark Fissures, the third book in the Rick Cahill crime series, was a finalist for the Macavity and Lefty awards and was a 2016 Top Pick for Bookreporter.com.

Blood Truth was a Shamus, Lefty Award finalist, a Foreword Reviews Book of the Year Silver Award winner for Thriller/Suspence, and a top pick by Bookreporter.com for Best Mysteries of 2017.

Matt lives in San Diego with his yellow Lab, Angus, where he is writing the sixth Rick Cahill crime novel.