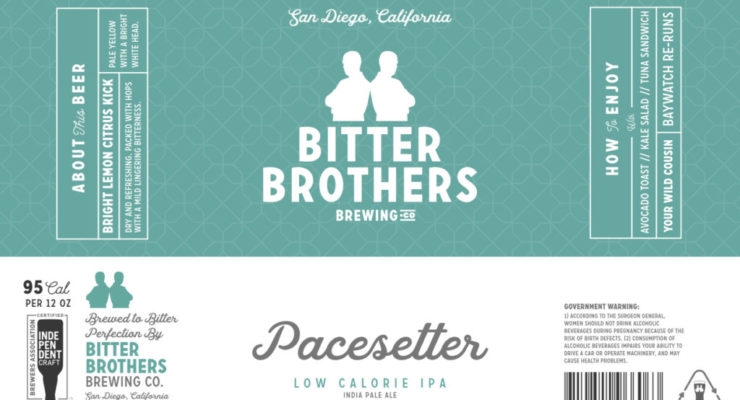 GUEST BLOG / By Ryan Lamb, Editor-in-Chief, West Coaster Craft Beer print magazine and website--It used to just be Michelob Ultra, but now brewers all over are marketing their products to the health-conscious.

Locally, Bitter Brothers’ Pacesetter IPA is “brewed to be light in calories but not in flavor,” said head brewer Tyler Tucker. The beer, clocking in at 95 calories (per 12-ounce serving) and 4% ABV, is currently available in the tasting room and will soon be in wider distribution via 16-ounce cans. It’s hopped with Centennial, Simcoe, El Dorado, and Mosaic at about 1.5 lbs per barrel; the malt bill is two-row and acidulated malt.

“Flavors include lemon and peach with a slight hop resin and a lingering bitterness. The beer is refreshing with a crisp, clean, and dry finish,” said Tucker. “To truly enjoy this beer, drink it before or after a workout, or a night out with friends. It also makes a great yard work beer, or even a shower beer.”

Meanwhile, in early February, Chico’s Sierra Nevada announced they will soon be acquiring San Francisco’s Sufferfest Beer Company. Sufferfest markets to athletes (the name refers to prolonged suffering in endurance competitions), and their ales and lagers are gluten-reduced with names derived from sports. “I’ve always craved a beer after a race, but when I couldn’t find a beer that agreed with my dietary and performance needs, it left a genuine void in the post-race social experience,” explained Sufferfest CEO Caitlin Landesberg.

As for some of the larger brewers, Heineken-backed Lagunitas is pushing their DayTime IPA (4% ABV, 98 calories), Constellation Brands-backed Ballast Point has a low-cal lager separate from Longfin (4.2% ABV, 99 calories), and Bud Light has made a big deal of the nutrition labels on their new packaging, showing 110 calories per 12-ounce can.