The 9th annual HessFest is set for June 22 with proceeds going to major charities like Pablove.org, who are leading the fight against child cancer.  That’s brewer Mike Hess on the left. See details of the HessFest below.
By the Staff of West Coaster monthly print magazine and daily blog: www.westcoastersd.com

June 1 | Log Cabin Day: You have to wake up pretty early in the morning if you want to drink big ol’, boldy-flavored stouts with the Pure Project Brewing crew. They’re celebrating the breakfast of champions (beer) at this fest built around their imperial stout. Various versions (coffee, strawberry, slushie) will be on tap along with other specialty brews from the Miramar interest. | Pure Project Brewing, 9030 Kenamar Drive, #308, Miramar, 9 a.m.

June 9 | Stone Sour Fest: Pack your Tums and prepare to pucker up to an impressive assortment of sour ales brewed, aged and procured by the folks at Stone Brewing, when this venerable beer festival returns to the company’s Escondido gardens. This event may be in its 13th year, but luck will be on the side of anybody in search of top-notch sour beer in lovely environs. | Stone Brewing World Bistro & Gardens, 1999 Citracado Parkway, Escondido, 10 a.m.

June 14-16 | San Diego International Beer Festival: The San Diego County Fair is an annual must-visit for most locals, but a little beer makes this already-fun summer staple even better. And a lot of beer makes it…you guessed it…a lot better. And that’s just what you’ll encounter at this annual fest, featuring hundreds of beers culled from around the world and our own backyard. | Del Mar Fairgrounds, 2260 Jimmy Durante Boulevard, Del Mar, Times Vary

June 29 | Anniversary & IPA Fest: Even though it’s their third anniversary, the hops-loving team at North Park Beer Co. understands it’s not all about them. Sure, they have amazing IPAs, but they’ll be sourcing terrific India pale ales from a bunch of their favorite breweries in order to share those traditional and outlandish creations with attendees of their lupulin-laced soiree. | North Park Beer Co., 3038 University Avenue, North Park, 11 a.m.

Don’t forget to check out West Coaster magazine’s full events calendar for a listing of even more beer-related events taking place in San Diego County this month and beyond.  Click here. 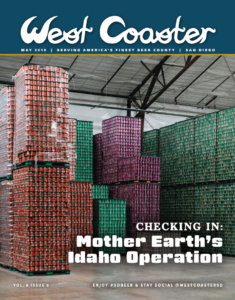