GUEST BLOG / By Brandon Hernandez, Senior Editor, WestCoasterSD.com--Homebrewing competitions allow recreational beer-makers to test their abilities against like-minded craftspeople. While such contests can include team awards for homebrew clubs, beer entries typically come from individuals, which makes The Boil Rumble out of the ordinary. In its first year, this annual fermentation melee from Wyoming-based Melvin Brewing (which operates four brewpubs in three states) is exclusively for established clubs. Even though its new to the recreational-brewing scene, the inaugural edition of the contest garnered entries from 102 different entities.

Winners were recently announced, and Rhode Island’s Eastbay Homebrew Club (EHC) took top honors with its “New England Breakfast Ale.” As a result, its team will receive a MoreBeer! brew sculpture system (a nod to the 20-gallon system Melvin was founded on in 2010), interview session on The Brewing Network, and an entry in the Great American Beer Festival’s Pro-Am Competition this October in Denver, Colorado. Perhaps most exciting for the winners was having the chance to not only have their creation canned and available in the 18 states where Melvin beers are sold, but getting to select which of the company’s brewing locations they’d like to visit for its preliminary manufacture.

The EHC crew selected Melvin’s brewpub in San Diego’s East Village. So, too, did the third-place winners, Merrimack Valley Homebrew Club (located a mere hour-and-a-half from Rhode Island). While the latter’s experimental IPA will also be canned, it will only see distribution in the club’s home region of Massachusetts. Given the extravagantly enjoyable time the EHC team had during their trip to San Diego, that minor limitation will be rendered mostly moot. EHC’s Saturday in San Diego included stops at Stone Brewing World Bistro & Gardens – Liberty Station, White Labs, Modern Times Beer, Pizza Port Ocean Beach, AleSmith Brewing’s anniversary party and, last but not least, a late-night session at Hamilton’s Tavern. At each stop, they had time to converse with staff and geek out over beer and brewing.

“They treated us like royalty and really took care of us,” said EHC member Chris Darling. “The White Labs facility was intense and eye-opening. Being able to taste beers side-by-side and understand the nuances in the yeast was very interesting and gave our club ideas for some of our next brews.”

Speaking of understanding nuances, what exactly is a “New England breakfast ale”?

“We wanted to set ourselves apart from all the IPAs we figured would be entered,” says EHC’s Steve Amaral. Melvin confirmed that most of the contest’s entries were IPAs, as were half of the six finalists. “As a group, we decided to add coffee and maple syrup to a brown ale. Our club members have brewed nearly a dozen coffee beers and we have all decided that dry-beaning is the best way to make this style, so that’s what we did.”

“This club came to us with a stylistically correct recipe so all I had to do was build it up and brew it,” says Melvin’s East Village head brewer Bobby Oliver. “We tweaked a couple of the bittering hops and changed the coffee brand to Mostra Coffee, but other than that we were able to copy the recipe, using the same maple syrup…not Log Cabin.”

Come November, the New England Breakfast Ale will be brewed on a larger scale at Melvin’s Wyoming headquarters, then released in cans on a broad scale. Meanwhile, the draft version will soon be on-tap at the East Village brewpub, including a nitro version. Oliver will also transfer some of the 5.4% beer into barrels to age.

“It’s hard for a homebrewer to tell if our beer is actually on-point because our friends say it’s good, but does that actually make it good?” asks EHC’s Mark McMahon. “The validation that our homebrew is a great beer and the positivity surrounding this contest is great. It was an incredible experience and way more than we could have ever expected. We had ridiculous amounts of fun.” 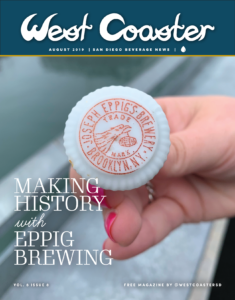 PillartoPost.org is a media co-op with WestCoaster Beverage News, based in San Diego.  Originally published on August 22, 2019.
Click here for a free download of WestCoaster’s August, 2019 edition.