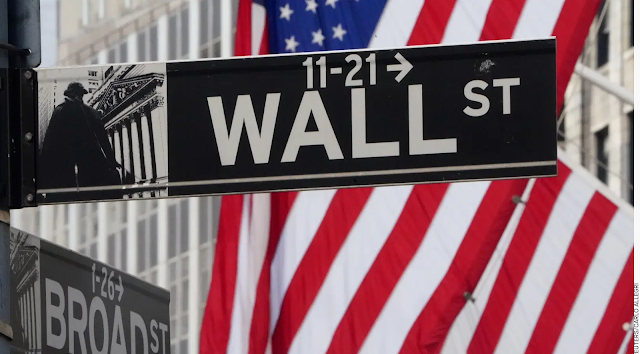 Editor’s Note: As Edward Jones is the financial advisor of this daily online publication, permission has been granted to pillartopost.org [p2p] to republish certain data to our readership.

The U.S. economy added 245,000 jobs in November, missing estimates amid a spike in COVID-19 infections and renewed restrictions in activity. The unemployment rate declined to 6.7% from 6.9%, but the participation rate also declined, indicating that more people exited the labor force.

The silver lining is that the downshift in job gains could apply pressure to lawmakers to reach an agreement for a new stimulus package before the end of the year. Oil extended its gains to a nine-month high after OPEC and its allies agreed to increase production more gradually than previously planned, and the dollar hit a new two-and-a-half-year low against major currencies.

Markets added to year-to-date gains last week, with the spotlight concentrated on the triumvirate of 1) vaccine progress, 2) the current state of the economy and 3) the potential for a fiscal package in Washington to bridge the gap between 1 and 2.

Our quick take on each:

--Vaccine hopes: The mass distribution of a vaccine sometime next year represents an inflection point for the recovery, allowing economic activity to return to more normal levels. Markets have (appropriately) focused on the post-vaccine recovery in recent weeks, supporting the 13% gain in the S&P 500 since the start of November.

--The economy: While the prospective vaccines firm the outlook for growth next year, current conditions are showing the headwinds created by surging COVID-19 cases and the resulting shutdowns across many regions of the country and the developed world. Retail spending, manufacturing activity and the labor market are all exhibiting resiliency but also signs of stress. We expect the rebound to stall somewhat in the coming months before regaining momentum next year.

--Fiscal stimulus: Negotiations in Congress over a fresh round of fiscal aid showed faint signs of progress last week, but an immediate deal is far from assured, as Democrats and Republicans remain divided on the size and targets of a new aid package. We suspect that the broader budget negotiations in coming days will include incremental fiscal-relief measures, but a more comprehensive deal may not fully emerge until early next year. With the prospects of a vaccine improving, fiscal stimulus will be important in bridging the financial gap for households and small businesses until the economy is more fully reopened next year.

Last week brought the latest jobs report, the turn of the calendar to December, and new highs for the stock market. These aren't foundational catalysts for the market, but they do offer an opportunity to evaluate performance. Using the past as a guide, here's historically what's come next:

--Sub-7% unemployment: The November jobs report released last week showed that the U.S. economy added 245,000 jobs last month, dropping the unemployment rate to 6.7%. On one hand, it's good news that job creation continues to be positive, with this marking the seventh consecutive month of hiring gains (totaling 12.3 million).

On the other hand, the rate of job growth has slowed meaningfully amid renewed cases and restrictions. More broadly, the unemployment rate has reached the lowest level since the pandemic began, falling from 14.7% in April to below 7% in November. This is encouraging improvement, but 6.7% unemployment is still historically high and a good reminder of just how much damage the pandemic has inflicted on the labor market.

The good news: The unemployment rate has pierced the 7% mark in a downward (improving) direction 7 times since 1945. One year later, on average, the unemployment rate was 5.8%. GDP growth averaged 5.8% during that time (including 2.9% in the year following the 2013 drop below 7%), supporting the case for a sustained, healthy, and expansionary economic phase ahead.

--Momentum heading into December: Stocks take their direction from economic, earnings and policy fundamentals, not the calendar. That said, December has historically been a positive month for the market, with an average monthly gain of 1.6%1.

--The good news: When the stock market enters December on a positive note, that momentum has often been carried through the remainder of the year. Over the past 75 years, when stocks have started the final month of the year with a year-to-date gain of 10% or more (as is the case this year), the market posted a positive gain for December 82% of the time. And the market rose by an average of 7.8% over the following year.

--Recovering to record highs: Stocks have now recouped the bear-market losses from earlier this year, reaching a new record last week. With equities up more than 60% since late-March, this has been the fastest recovery from a 30%-plus market drop on record. Markets don't travel in a straight line indefinitely, and while we think 2021 will be a positive year for the markets, we expect the path ahead to be bumpier than the one we've traveled over the past eight months.

--The good news: Recovering the losses from a bear market didn't mark an exhaustion point for stocks. Looking back at the bear markets since WWII, once the market returned to the previous high, the market gained an average of 14.3% over the following year. The Week Ahead Important economic data being released include the small business optimism index on Tuesday, inflation on Thursday, and consumer sentiment on Friday. 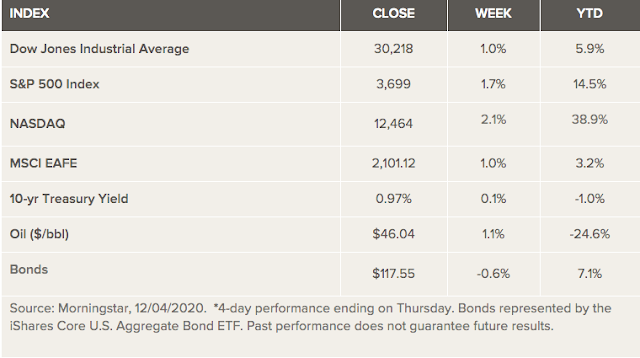