RETRO FILES / BEYOND A GLIMPSE OF STOCKING: FRENCH POSTCARDS REVEALED


Be careful what lurks around the corner when exploring those ancestry research sites. Take for example a Franco-American staffer on this blog, who recently discovered a great-grandmother (we’ll call her Polly to avoid being raided by the still existing Society for the Suppression of Vice), posed scantily clad in a risqué French postcard. 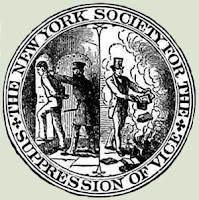 Word, albeit a now dusty one, has it that Polly, who married into the family from France) is the third dancer from the left in the photo above. Written on the back of the postcard: “I cannot be sure with all those sturdy thighs one gets confused but it looks remarkably like her.”

We assume that was written by GG Millard. According to family lore, however, the marriage to Polly was annulled (apres coup), as grandfather was only 18 when he visited France before college. In his later years, Poppa Millard was heard to mumble into his Cream of Wheat “…they took my Polly, they smashed the marriage, but, damnit they’ll never take my memories of the our lune de miel…” (honeymoon).

All of this begs the question:

WHAT IS A FRENCH POSTCARD? 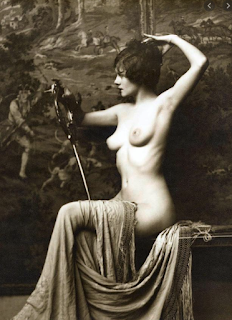 The cards were sold as postcards, but the primary purpose was not for sending by mail, as they would have been banned from delivery. The cards sometimes even depicted naked lesbians.

French street vendors, tobacco shops and a variety of other vendors bought the photographs for resale to tourists. —Wikipedia

The French magazine, La Beaute was a major early source for nude pictures. They sold photographic based images of poses in the nude that were marketed for the use of artists, but these cards became greatly coveted by the general public. Though made in Europe their largest audience was in the United States.

These types of cards were most popular in the 1870’s but they had been manufactured as soon as technology provided a convenient way to reproduce photographs in printed form. Most of their backs are completely blank without any postal markings making them difficult to precisely date. They are only referred to as postcards because of the similar size as they were illegal to mail. Actual postcards with nudes on them only appeared around 1900.-- Metropostcard.com 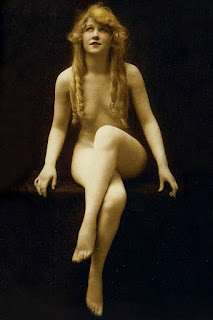 On March 3, 1873 at the urging of the N.Y. Society for the Suppression of Vice and the Y.M.C.A. the Comstock Laws were passed prohibiting obscene material from being sent through the U.S. mail. It was not only nudity (see postcard image, left) that could cost a sender ten years at hard labor, but the posting of any sexually related material. This law was also used extensively for censorship. Works by Balzac, James Joyce, Leo Tolstoy, and Walt Whitman were labeled smut and banned from the mail. Almost 18 million postcards were destroyed under this law (talk about indecency).

Although the restrictions relating to birth control information have since been dropped, it should be noted that this law is still on the books and the U.S. Postal Service is allowed to seize your mail when suspected of containing indecent material. Few today are imprisoned but postcards with nude or suggestive imagery continue to be intermittently confiscated at the discretion of Post Masters. -- Metropostcard.com