Your Disraeli Gears mention in your most recent newsletter last has inspired a response from our daily online magazine style blog pillartopost.org. Your latest effort is brilliant and a highly entertaining read (like trying to find a straight line path from your Wolseley to our hotel near Oxford Circus).

For Jeremy King’s monthly newsletter about to be discussed: CLICK HERE.

We are fond of the writing style and content of one of the UK’s top restaurateurs, a point that US editor Graydon Carter agrees.

While our blog seldom delves into the love life of others, but in Mr. King’s case we make an exception. The man is totally in love with his country, for better or worse, and his profession the hospitality industry (namely how to invent, staff and operate high quality restaurants.

King’s newsletter today, no doubt dashed off in one sitting, kaleidoscopes from pillar to post, a title of this blog. Its tangential style is lively, spontaneous, erudite and his readers are well rewarded for sticking to it. For example, we became reacquainted with the aforementioned Graydon Carter, who sayonara-ed from Vanity Fair to another excellent publication: this time Air Mail, an online effort that pours Madeira sauce over the mundane. Thanks for that. CLICK HERE.

Also, the co-owner of The Wolseley and other fine UK restaurants, delves into the unknown, the mysterious in a word: huh? For example, how on earth did he know, we yearning masses are crying to know the true meaning of Disraeli Gears, the 1967 album title recorded by Cream (Eric Clapton, Jack Bruce and Ginger Baker).

Immediately, we sent our publication’s crack team of researchers (worthy of Bletchley Park kudos) to learn the following from Wikipedia. 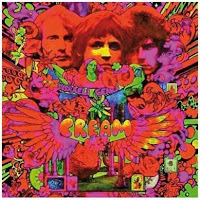 What’s with the name? Disraeli Gears is the second studio album (left) by the British rock band Cream. It was released in November 1967] and went on to reach No. 5 on the UK Albums Chart. and No. 1 on the Finnish charts. The album was also No. 1 for two weeks on the Australian album chart and was listed as the No. 1 album of 1968 by Cash Box in the year-end album chart in the United States.

The album is considered by critics as one of the greatest albums of all time. The album features the singles "Strange Brew" and "Sunshine of Your Love,"as well as their respective B-sides "Tales of Brave Ulysses" and "SWLABR".

Cream Drummer, the late Ginger Baker recalled how the album's title was based on a malapropism which alluded to 19th-century British Prime Minister Benjamin Disraeli: “... meaning derailleur gears...We all just fell over...We said that's got to be the album title,” recalled Baker.

Obviously, Cream band members were well acquainted with bicycle operations and perhaps, a certain weed. “Hey, Ginger did you ever get your bike fixed? I will. Something to do with the Disraeli gears…”

Nonetheless, the title is attached to what Wikipedia and so many others world wide call the best album ever recorded. CLICK HERE.  For the 1967 album Disraeli Gears, the band Cream consisted of Ginger Baker, Eric Clapton, and Jack Bruce. Also, Jeremy King mentioned an “agree to disagree” essay in the Times (for those on the Left Coast of America we immediately thought of the Costco warehouse Times or perhaps the Molokai Island Times, a frequent vacation stop for staff.

Now, we know (sad provincial minds corrected) that the Times is of course, The Times (CLICK HERE) and is published in London, which of course we confuse with the Financial Times, but we digress. If The Times published baseball scores on a timely manner as the Los Angeles Times doesn’t, we’d be lifelong subscribers…draining the last of the inheritance to get the subscription across the damn pond.

Back to Agree to Disagree as a term, we discovered it also appears in the lyrics of the same title by singer, composer, lyricist Susan Ashton from her album Susan Ashton.

Standing on this battlefield of strong opinion

Among the verbal brush and briar

Plenty of weaponry and ammunition

And I argue my convictions until I'm blue in the face but.

Maybe we should just agree to disagree.

Can we meet on neutral ground

And carve a path for restitution

Because my love for you is surely strong enough

To find some kind of resolution.

Cause we can have our differences

And that won't change the way I feel

About you and about me and about

God And His whole deal but.

Maybe we should just agree to disagree.

Cause we are getting nowhere fast

When the concrete and the supernatural clash

So we will stand at other ends with all this stuff

But can't we find a common thread in love.

And in our thirsting quest for knowledge

Maybe one day we will find

That I finally see it your way

Or you finally see it mine.

Maybe we should just agree to disagree...

Finally, and foremost please CLICK HERE for a roster of the highly praised (for good reasons) Corbin and King restaurants.

Oh, for a suitable ending to this, if you are keenly interested in Derailleur gears CLICK HERE for a primer.

PS: FYI 100% of pillartopost.org staff has worked in a restaurant at one time or another.