GUEST BLOG / By Paul LeBlanc, What.Matters@CNN.com--When the Supreme Court overturned Roe v. Wade in June, Planned Parenthood made a vow. "It is a dark day for our country, but this is far from over. We will not compromise on our bodies, our dignity or our freedom," the organization said in a statement.

But with more than a dozen states enacting complete or partial bans on abortion following the Supreme Court decision, abortion clinics, like those operated by Planned Parenthood, and the protests they attract have become an even more potent symbol of the country's deep divisions over reproductive health.

To minimize the effect these protests have on patients visiting Planned Parenthood clinics, the organization deploys volunteer clinic escorts to "help get patients to the door of our clinic with as little harassment from protesters and picketers as possible," according to its website.

The result is a defensive role on the front lines of America's abortion debate. 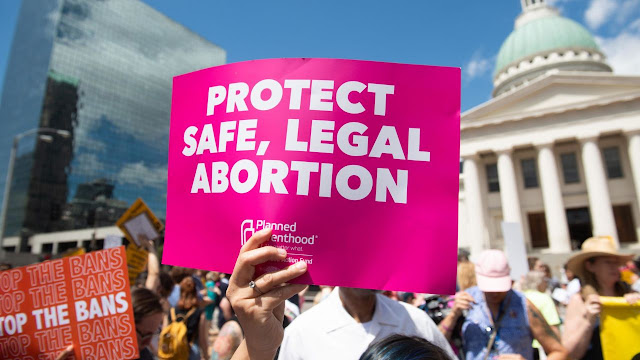 To understand the role and what it entails, we turned to Marian Starkey, a volunteer Planned Parenthood clinic escort in Maine who has been guiding patients past protesters at different locations since 2007.

Our conversation, conducted over the phone in late December and lightly edited for flow and brevity, is below.

CNN’s LeBLANC: When you sign on for your clinic escort shift, what can the average day bring? I imagine every day is a little bit different.

MARIAN STARKEY: To a degree. I mean, the difference really revolves around the public's reaction to the protesters. Honestly, the protesters are pretty consistent. It's generally the same people who show up every Friday.

Friday is the procedure day at Planned Parenthood. And so that's the day that the protesters are there. They usually arrive around 8:30 in the morning and, depending on the weather, they'll stay until 11 o'clock or sometimes later if it's nice out.

They show up with massive signs that barely fit in their cars. They have to kind of squish them into the back seats of their cars when they leave at the end of the shift. The signs show fetuses in very advanced stages of development and pretty, pretty gruesome images, and they're meant to shock and disturb patients and passersby, which they do. They show up and they do a little prayer to start off their day. And then the men -- it's always men -- will take turns preaching throughout the morning. I've never, in the 15 or 16 years I've been doing this, I've never seen a woman preach, always the dudes. Young ones, too. I mean, men as young as probably 19 or 20 sort of get on their soapbox and preach at passing traffic, at the patients entering the clinic. But mostly at us.

STARKEY: Honestly, the patient traffic isn't so heavy that there's always somebody for them to be sort of focusing on. So they focus most of their attention on us greeters and try to learn personal information about us and then use that to sort of get under our skin. I mean, they all know my name. They know that my mom's a midwife. I hear about that a lot -- that, you know, she brings life into this world and I take it out.

STARKEY: Yeah, so it can be pretty targeted. We have a non-engagement policy across the country, so we don't speak with them; we try not to even acknowledge them with eye contact. And so we just kind of look right through them or look up and down the sidewalk to see what's going on with patients and people passing by. And that doesn't deter them from talking at us, but we don't engage.

CNN: How is it that they're learning personal information about the clinic escorts?

STARKEY: The same way that we're learning information about them, if I'm being honest. If they make the mistake of using each other's names out on the sidewalk, then now we know their name. They coordinate with each other using a Facebook page, and so if you go to that page, you can see a lot of their activity, and it can actually be kind of useful to see what they've got cooking. They'll sometimes reveal plans for future protest events that they wanna do. But it's also a place to see their pictures, and so we can recognize who they are. And I imagine they do the same thing with us. Preparing the patients

CNN: So your goal is to basically shield the people using Planned Parenthood's facilities from as much protester activity as possible?

STARKEY: Yeah, and to just keep the chaos to a minimum, if possible. Patients can't tell when they turn the corner from the parking garage and start their walk down the sidewalk -- they can't tell who's a protester and who isn't and who's on their side and who's not. And so when they make their appointments over the phone, they've already been warned there are protesters.

They've also been told that there are clinical volunteers who are wearing these bright pink vests. But I think sometimes that doesn't even register for them because they're just in such a state when they see what they have to walk through. So, you know, we're just trying to keep things as calm as possible, and not engaging with them tends to be the best way to do that. People are in all sorts of different mental states when they arrive. A lot of times just the presence of the protesters will make them cry.

They have to walk down almost an entire block to get from the corner where the parking garage is to the front door of the clinic. And so I'm sure that can feel like an eternity for patients when they're already upset. And so a lot of times they'll burst into tears or the partners that they're with -- their support person -- will start screaming at the protesters. A lot of times the men are actually the targets of the abuse from the protesters. They have sort of standard lines that they shout at them, like "real men don't kill their children" and "be a father" or "don't kill your child," that sort of thing.

So yeah, it's just chaos out there. It's a circus.

How effective are the protests?

CNN: Have you ever had someone come in that was so traumatized by the experience that they no longer want to go through with their procedure?

STARKEY: I haven't seen that happen. The protesters, we will hear them sometimes boast about all of the lives that they've saved through people changing their minds. I haven't seen it happen. So I'm not sure what they're referring to when they say that. I don't know, maybe something's happening behind the scenes that we're not privy to. I'm not sure. We have had patients for sure who, if there weren't greeters on the corner, would not have walked down the sidewalk by themselves, and they told us that.

CNN: You've been doing this a long time. I'm curious if you've noticed a change at all since the Dobbs decision that overturned Roe v. Wade?

STARKEY: Honestly I don't think so. The protesters seemed happy about it, but not overjoyed. They have told us over the years in their preaching, but also just kind of the one-sided conversations they have with us, that they're not political people. That for them, the person in charge is Jesus Christ and they're not all that interested in the laws of man and the elected officials that we have.

What I have noticed that's different is that people passing by are a lot angrier. The morning of the decision, a man came by and just screamed in the faces of the protesters: "You finally got what you wanted, now you can get out of here."

And they said, "Well, no, because abortion is still legal in Maine, so we still have work to do, and we'll be out here regardless."