THREE EVENTS NOT TO MISS THIS SATURDAY

CHICAGO IS--By Ariel Swedback (Pillar to Post, reporter)--Lust, folly, and bootlegged liquor hit the stage at The Birch North Park Theatre on University Avenue this month with the arrival of Chicago.
A satirical spin on the fame and fortune of the Jazz Age, Chicago brags six Tony Awards and the third-longest run in Broadway history.
San Diego Musical Theatre’s Chicago runs from February 15th to March 3rd.

PRE/POST THEATRE DINING IDEA STARTER (within three blocks from theatre).  If marked in red means among the very best in San Diego.  By Holden DeMayo (Pillar to Post, restaurant writer)

INTERACTIVE SWOON--By Hana Eades (Pillar to Post, reporter)--While many dessert bars may only quench the cravings of one’s taste buds, “Swoon”, being under the same roof as “Art Produce”, offers a visual satisfaction as well. Since purchased by Lynn Shusholtz 13 years ago, the building has been transformed from a bland storage-like atmosphere into an 8,000 square foot venue unlike any other. This building is an experience for all five senses; there are art studios, a meditation area, a free art gallery, a garden, and of course, the new dessert bar (3931 University at Herman).

The menu is be seasonal because the chefs, David Lamm and Ian Smith, rely on locally-grown produce. Some of the plates include: tangerine or walnut scones, espresso or peanut macaron, orange rosemary sorbet and without a doubt, chocolate chip cookies.

Before Lynn purchased the lot, it was a produce store with boarded up windows and a rear entrance. Having a desire to encourage more community interaction, one of her first moves was to take down the boards, which revealed floor-to-ceiling windows. Now, with an interactive gallery visible from the sidewalk, people walking around North Park can observe local art from a distance or up close with original tasty treats.   See below for upcoming event at Lynn's gallery. 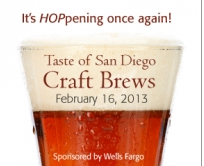 HISTORIC CRAFT BEER EVENT—The White Rabbit in Alice in Wonderland offered, “I’m late—no time to say hello-goodbye, I’m late.”  That was Matthew Schiff this week as he was spotted in the archives of the San Diego History Center (where he’s a marketing type) busily researching and preparing for Saturday’s Taste of San Diego Craft Brews, 2013. The annual fundraiser for the SDHC is set for 5 to 9 pm at the Balboa Park’s History Center address, 1649 El Prado, Suite 3.  The event is a chance to celebrate San Diego’s history making brews.  Tickets are $45 per person or a VIP ticket is available at $75.  While you’re there tasting samples of San Diego County’s finest craft beers and noshing on noshes ask to see a preview of the History Center’s upcoming exhibition (April) “Bottled and Kegged: San Diego’s Craft Brew Culture.”  Info: 619-232-6203.