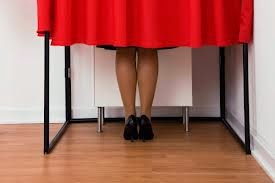 Where are the women and how will they vote?

With Hillary Clinton’s presidential bid now official, the airwaves are thick with some version of or variation on this question. Implicit in its asking are shades of Clinton’s 2008 campaign and all the ways in which gender-based strategies have shaped electoral contests ever since.

Source: Reposted from http://weeklywonk.newamerica.net/ which is part of New America Foundation website www.NewAmerica.net

Data from 2008 to 2014 show several worrying trends. Women’s participation declines in non-presidential election years, but it also declined in 2014 midterm elections—as compared to the 2010 midterms. That proportion dropped as much as three percent in battleground states such as Colorado and Virginia, as well as two states progressive women candidates had hoped to make competitive, Kentucky (Alison Lundergan Grimes) and Maine (Shenna Bellows). In a year in which many incumbents and challengers race campaigns focused on women’s rights, female voters also turned away from Democrats, progressives, and female candidates.

We do know – or we should – that the big picture for women candidates and women voters in 2016 will be more complex than many have anticipated.
What didn’t decline was the correlation between women’s voting patterns and partisan outcomes. Democratic candidates who got below 55 percent of women’s votes didn’t win. You can see check out the data in the chart below.

Perhaps surprisingly, we haven’t seen – at least in public – post-election research and surveys specifically focused on women and what might be suppressing their voter turnout. We do know that women who went to the polls reported themselves as more motivated by worries over security issues than the pundits and strategists had anticipated. We also know that women in New Hampshire came to the polls in equal proportions in 2008, 2010, and 2014, and dropped their support for Senator Jeanne Shaheen only one percentage point during that time. 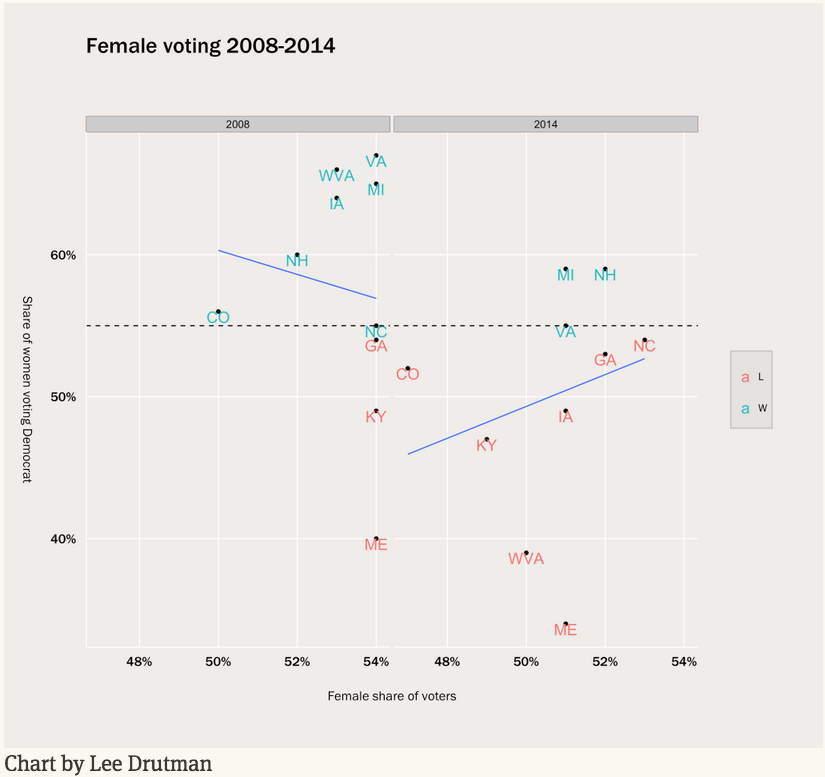 We do know – or we should – that the big picture for women candidates and women voters in 2016 will be more complex than many have anticipated. Candidates will likely need to make their campaigns about more than fear of or fortitude about traditional women’s-rights issues. This week in The American Prospect I suggest one lesson to draw:

“Yes, women are concerned about child care, women’s health, and blatant sexism. Yes, statistics say the economy is ‘improving.’ Yes, we are more likely to die in our bathtubs than at the hands of the Islamic State. But Republican strategists have given notice that one of their key strategies for 2016 will be to play on anxieties, especially women’s anxieties, to attack one of Democrats’ presumed strengths, a female candidate’s attractiveness to female voters. The best way to respond to that strategy is for those candidates to respond creatively and substantively to the anxieties themselves.”