Is All Yogurt Created Equal? 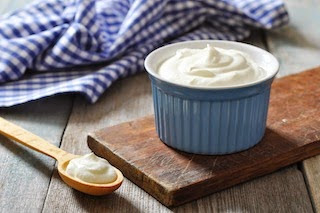 To answer the title: kind of. The same basic principle of yogurt-making applies to all yogurts: the inoculation of milk with specific strains of yogurt bacteria followed by incubation at a temperature warm enough to encourage growth and proliferation. Yogurt is milk transformed into a creamy, tangy, more nutritious product. All yogurt is initially created equal, but after that, all bets are off. For whatever reason, food producers have seen fit to ruin a perfectly good thing with misguided additions and subtractions.

They remove the fat and try to recreate the texture using gums, stabilizers, thickeners, and gelatin.

They load it with sugar and/or high fructose corn syrup, assuming consumers simply can’t handle the tang of real yogurt.

They turn an incredible whole food with thousands of years of tradition into an edible food product that bears little resemblance to its progenitor.

As I see it, there’s yogurt and there’s “yogurt.” Eat the former and avoid the latter.

THE GOOD STUFF
Luckily, there’s a lot of good yogurt that you should eat. In most decent grocery stores, full-fat yogurt is available. Organic options, all of which tend to avoid incorporating unnecessary ingredients and removing necessary ones, are common and affordable.

Standard full-fat yogurt.
This is yogurt in its natural state. It’s creamy (provided you haven’t used low-fat or skim milk), it’s tangy, it’s often downright drinkable if you let it sit out for half an hour.

Strained yogurt.
Also known as Greek yogurt (except in Greece, where they just call it “yogurt”), strained yogurt is yogurt with most of the liquid whey removed. This creates an ultra-thick, high-protein, high-fat, creamy yogurt that’s perfect for making tzatziki, the Mediterranean cucumber yogurt dip, Indian curries, and replacing sour cream. It’s also fantastic with berries or drizzled with some raw honey. You can strain regular yogurt with cheesecloth (or a paper towel laid on top of a mesh trainer) to get Greek yogurt.

Greek yogurt may actually be Turkish yogurt. Chobani, one of the leading Greek yogurt brands in the US, was started by a Turk and named after the Turkish word for “shepherd” (traditionally, strained yogurt is made with sheep’s milk). In Turkey, “Greek yogurt” is known as süzme, or strained yogurt. Bitter debates about the provenance of strained yogurt are being waged as you read this.

Cream top/cream line yogurt.
Most yogurt is homogenized, even if the milk used to make it is not. But sometimes yogurt makers refrain from stirring and a line of cream forms along the top of the yogurt. To me, this is a good thing, and it can foster unity in households divided along desired levels of fat content. One party eats the top half and gets extra fat, the other party eats the lower half and receives lower fat yogurt. Everyone’s happy and buying crappy low-fat yogurt becomes unnecessary.

Skyr.
Skyr is an Icelandic yogurt/cheese hybrid that incorporates both bacterial cultures and animal rennet to produce a thick, high-protein cultured milk product. And yes, skyr is non-fat, but that’s actually the traditional way to make it. Skyr makers would use the leftover milk after making butter.

In the United States, yogurt is something you eat when you don’t have time for breakfast or are “trying to eat healthier.” It either comes in single serving tubs that we eat at our desks or tubes that we squeeze down our throats on the morning commute.

For the rest of the yogurt-eating world, it’s a staple food eaten throughout the day. It’s a common condiment and a delicious dessert. It’s a cooking ingredient. It’s a dip, a sauce, a dressing. It’s even a drink. And yes, it’s also a breakfast food. Simply, yogurt is just kinda always around and available. Among those who eat it, yogurt is integral.

If you know me at all, you know my ears perk up whenever a tradition or practice seems near universal (like saunas, or fermentation, or walking). So many cultures use yogurt on a regular basis throughout the day that I’m thinking there’s something to this.

So, what are some ways we can expand our yogurt palate? I’ve been trying to incorporate a little yogurt into my life as of late, and I found great inspiration from looking to the cuisine of the nation from which we get the word “yogurt”: Turkey.

Yogurtlu Havuc
This is a Turkish carrot yogurt salad commonly served at breakfast. The Turks eat it on bread, but it’s great as a side dish alongside a piece of lamb. It’s simple:

Shred a couple large carrots, then sauté them in olive oil and a little salt over medium heat until soft. Allow the carrots to reach room temperature.

Add finely grated garlic (as much or as little as you prefer) and paprika to strained (Greek) yogurt. Use full-fat, of course. Mix well.

Fold the cooked carrots into the yogurt mixture, and add a little hot chile (fresh or dried). Traditionally, dried isot pepper is used, but cayenne works well if you like a little more heat.

Yogurt Herb Dip
This one’s even simpler. Just get a cup or two of thick yogurt, the fresh herbs of your choice, and a little garlic. Mix it all together and use alongside meats or as the base for salad dressings. I like using mint and dill, but everything works. I sometimes add salt and fresh black pepper.

The Turkish beverage ayran is water mixed with yogurt and salt. It sounds weird, but it’s really quite refreshing. It’s also very easy to make at home and it’s better if you use sparkling mineral water. Just mix four parts regular full-fat yogurt with one part sparkling mineral water (something like Gerolsteiner with a high mineral content is best), add a little salt to taste, and blend or whisk together. It’s also pretty good with some chopped fresh mint.

Another more generic way to eat more yogurt is to use it in place of sour cream, whipping cream, and even mayo. Well, maybe not mayo. I hear there’s a decent one out there on the market.

Check back this Saturday for a savory yogurt recipe you won’t want to miss.

If yogurt doesn’t agree with you but you really want to eat it, don’t give up.

Try smaller amounts. Start with just a teaspoon at a time, and build up from there. You’re introducing new bacterial migrants to your gut and they need to ease into their new surroundings.

Try a different species. Yogurt fermentation reduces the allergenicity of bovine whey protein and casein protein, but that may not be enough if you’re really intolerant. Try goat or sheep (or find a grass-fed yogurt).

All this said, dairy in general and yogurt in particular aren’t for everyone.

HERE’S WHAT TO AVOID:

Look, I get it: sweet stuff tastes great. But it’s incredible how much sugar disappears into a vat of manufactured yogurt. A tiny little cup of your average sweetened yogurt has 20+ grams of pure unadulterated sucrose, which is far too much (and, like I said, you won’t even taste all of it because it’s been subsumed). If you absolutely must have something sweet with your yogurt, drizzle a little raw honey on the top. Adding honey yourself reduces the amount of sugar grams you need to obtain the desired flavor and ensures direct contact with your tongue. Another, probably better option is to slice up some fruit (blueberries, strawberries, mangos, maybe a banana) and slap it on there.

People love thick yogurt but they’re scared of the fat that creates the texture, so food manufacturers recreate it with additives. Are these additives necessarily dangerous or harmful to health? No, although a recent paper suggests they may increase the risk of obesity by disrupting normal gut bacteria, but why risk it when you can just eat the unaltered whole food? Whenever the jury is out on a particular food, I always play it safe and stick with the “natural” version.

Caveat: I’ve run across a few yogurts and kefirs with added prebiotic fiber (pectin or inulin, usually) and I don’t see much wrong with that. If anything, adding prebiotics to yogurt might actually increase the health effects and support the microbial population. Your mileage may vary.

These are almost always bad news. Just check out the nutritional facts for Chill Out Cherry Gogurt.

After low-fat cultured milk, the ingredients list falls apart. Sugar comes next, followed by modified corn starch, gelatin (nothing wrong with gelatin, but why is it in your kid’s yogurt?), and a real head scratcher — tricalcium phosphate. I understand the need for calcium in children’s diets, but isn’t yogurt supposed to be a fantastic natural source of calcium already? Why add more unless something has been lost in translation from real milk to tube-delivered slurry? The rest of the list is a motley assortment of stabilizers, gums, and synthetic vitamins that would be completely unnecessary if they just left the yogurt as-is. Oh, and there’s not a hint of actual cherry. Just “natural flavors.”

When all is said and done, you’re left with half a gram of fat, 2 measly grams of protein, and a full 12 grams of carbs, 75% of which come from pure sugar. I honestly don’t get it. Well, I get it; it’s a money thing. But parents, don’t fall for this. All the kids I’ve ever known love full-fat dairy. They aren’t sugar-crazed hellions until we shepherd them into that way of life by feeding them garbage like Gogurt.

Also, why “Chill Out Cherry”? Has Yoplait incorporated Afghan poppy extract or something? Maybe some valerian?

In the vast majority of studies that find dairy to be beneficial or associated with health benefits, they use full-fat dairy. And when a study finds that dairy is linked to negative health outcomes, a little digging usually uncovers the fact that the authors used low-fat dairy. I wrote an entire series of posts discussing the positive ramifications of including full-fat dairy in your diet, and I stand by them. Now, it’s possible that the reason why full-fat dairy is so good for us is because of what it is not: a processed, deprived food with added emulsifiers, industrial fibers, and sugar to make up for the missing fat. But I think the fatty acids themselves are highly beneficial, whether it’s the conjugated linoleic acid in organic and pasture-raised dairy that may offer protection against cancer and heart disease, the phytanic acid that improves insulin sensitivity in animal models, or the trans-palmitoleic acid that’s strongly associated with better metabolic health.

In certain situations, like a bodybuilder looking for a very high-protein, low-fat food source to augment post-workout muscle protein synthesis without incurring fat gain, a low-fat yogurt can be very appropriate. But most yogurts that remove the fat make up for it by adding stabilizers, gums, preservatives, and extra sugar, so if you decide to go with a low-fat yogurt, confirm that it contains none of these undesirable ingredients. And be sure to use full-fat yogurt in most other instances, for reasons already listed.

Visit the Start Here and Primal Blueprint 101 pages to learn more about the Primal Lifestyle.

Subscribe to my free weekly newsletter to receive 10 eBooks, a 7-Day Course of Primal Fundamentals, and more - all for free.

Cut to the chase by visiting PrimalBlueprint.com. There you'll find books, support options, and the best supplements on the planet to help you take control of your health for life.