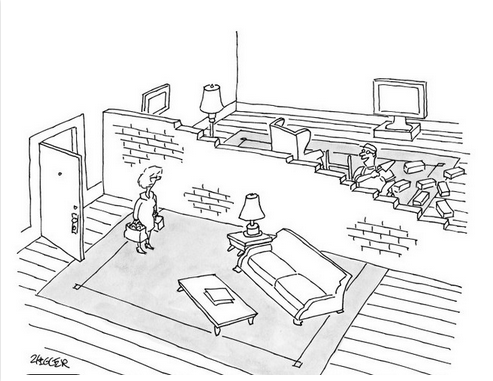 1. The odds are against you: the average number of entries per week is 5,372.

3. You have to enter every week. Did you enter this week?

4. Your caption would work better as a Kanye West lyric, such as this submission: “Why this room so fuckin’ tall?” “I’m buildin’ me a motherfuckin’ wall.”

5. Your caption is too long: “Man cave!? No, no, this is an installation critiquing the American man’s reactionary streak: faced with the collapse of traditional gender roles, he retreats into a masculinized space. I’m an ally! Also, have you seen my Xbox? Can’t find it anywhere.”


HIS WORKS:
Mankoff has edited at least 14 collections of New Yorker cartoons, including The Complete Cartoons of the New Yorker (Black Dog & Leventhal, 2004), a compilation of every cartoon published since the magazine was founded; the hardcover book is a 656-page collection of the magazine's best cartoons published during 80 years, plus a double CD set with all 68,647 cartoons published to that point “Urban Bumpkins” (St. Martin's/Marek, 1985) ISBN 0312834306

“The Naked Cartoonist: A Way to Enhance Your Creativity” (Black Dog & Leventhal, 2002)