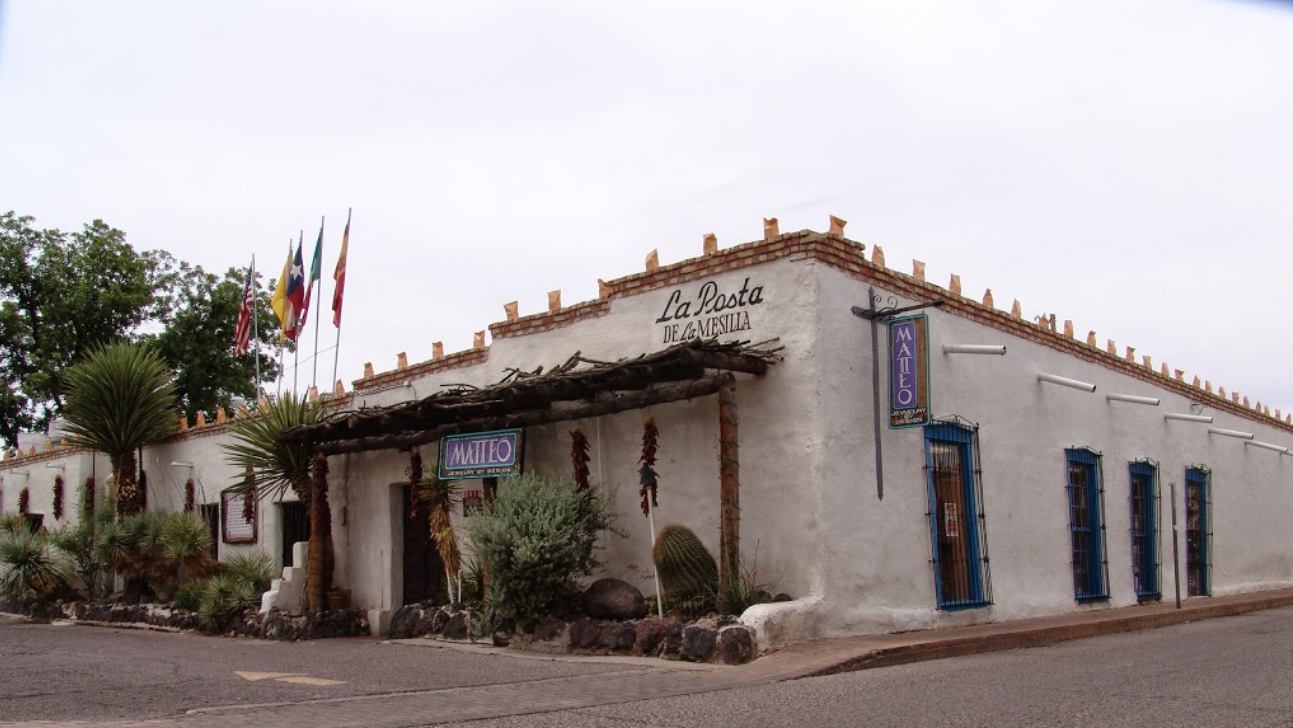 A plaque on the side of La Posta de Mesilla Restaurant (New Mexico) says Billy the Kid was sheltered in the same adobe premises during the late 1870s.  Back then it was called the Corn Exchange Hotel and was considered top of the line for the locale and the era.   In addition to the plaque, an early 1940s photo from the restaurant's files offers an image with handwritten notes claiming La Posta was indeed a haunt of the famed outlaw.  That's proof enough for us to call the place Billy the Kid’s favorite restaurant.

And as the late great true crime writer Tom Basinski once told me “if it didn’t happen that way—it should have.”

But today’s delicious La Posta Restaurant in Mesilla, NM (finally to the point) has been in business since 1939 and the building and restaurant has had its share of notables ranging from Sheriff Pat Garrett, Kit Carson, Pancho Villa to U.S. Army hero Douglas MacArthur.

Earliest records indicate the La Posta Compound was originally constructed in the 1840's. Sam Bean and his brother [Judge] Roy Bean, operated a freight and passenger service line to Pinos Altos from this building in the 1850's.

After the Civil War, The La Posta compound became an important stop on the Butterfield Stagecoach Line. During the 1870's and 1880's, the Corn Exchange Hotel, one of the finest lodges in the Southwest, operated from the building.

John Davis, the proprietor of the hotel, died in the late 1870's, however, his wife Augustina continued to operate the hotel, a restaurant and other businesses in the building until the early 1900's.

La Posta de Mesilla Restaurant originated in the northwest corner of the building in 1939 by Katy Griggs Camunez. The business has grown to become one of the most famous restaurants in the Southwest, occupying 10,000 square feet of the La Posta Compound which now included several shops.

After Katy passed away, the property and business was acquired by a great niece,  Cuisine and history lovers will rejoice that Jerean Camunez Hutchinson and her husband Tom, a.k.a. "Hutch" acquired the compound and who have proven to offer the same quality Mexican food and great service in the unique dining environment Katy created. The restaurant offers many fine traditional "New Mexico" Mexican dishes make from century-old recipes handed down over the years from the Fountain, Chavez and Griggs families.

Owners insist “One of our most famous dishes, the Tostada Compuesta, originated at La Posta in 1939. This dish consists of a toasted corn tortilla cup filled with frijoles, red chile con carne, topped with chopped lettuce, diced tomatoes and grated cheddar cheese. If you prefer green chile, the Locals favorite is the sour cream enchilada. This dish consists of corn tortillas smothered with green chile sauce, topped with grated cheddar cheese or Monterrey Jack cheese and sour cream, and includes refritos, rice and our very tasty Mexican slaw.

Other La Posta favorites include compuesta salad, red enchiladas, folded and rolled tacos, beef or chicken flautas, chile rellenos, as well as a wonderful selection of desserts including our very delicious homemade flan and empanadas.

Perhaps one of La Posta’s best kept secrets is our tasty succulent steaks, served with your choice of baked potatoes, red enchilada, or steak fries and includes a side of our green chile (of course!)

The restaurant’s website invites customers to “browse through our many gift shops, specializing in gourmet gift items and chile products, southwestern clothing and exquisite jewelry. Or perhaps what you may really desire is a siesta on a bench under a tree on our beautiful, peaceful Historic Plaza here in Mesilla!”

Yes, I’ll have a siesta to go, thank you!

How to make chili
https://www.facebook.com/lapostademesilla