For a glimpse of an American jazz legend go to:

Also, the Summer with Satchmo music series at the Louis Armstrong House Museum in Queens, NY ends with the annual free block party on August 25.

About the House:
In 1943, he and his wife, Lucille, settled in a modest house on 107th Street in Queens, NY, where they lived for the remainder of their lives. No one has lived in the house since the Armstrongs, and the house and its furnishings remain very much as they were during Louis and Lucille’s lifetime.

Today, the Louis Armstrong House Museum is open to the public, offering guided tours of Louis’s longtime home. On the tour, audio clips from Louis’s homemade recordings are played, and visitors hear Louis practicing his trumpet, enjoying a meal, or talking with his friends. Visitors also get to enjoy an exhibit on Louis’s life and legacy, and the Armstrongs’ beautiful Japanese-inspired garden. 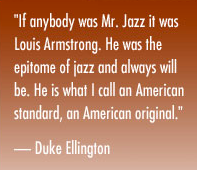