THE BREWSPAPER / WELCOME ANOTHER GRAPEFRUIT IPA 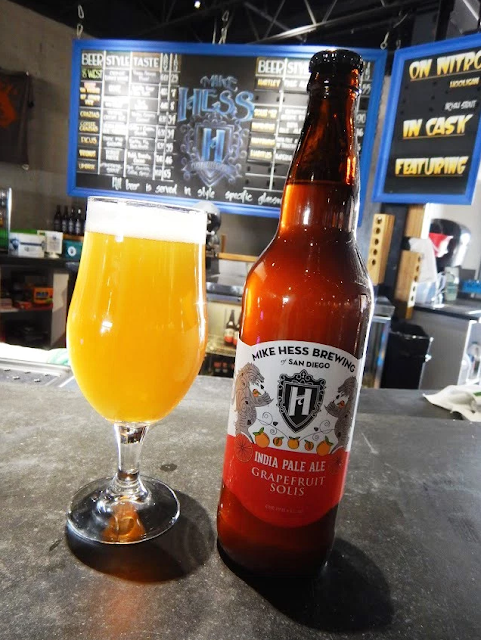 “Seven years ago, Mike Hess was trying to convince his mother to try an IPA over her preferred stout. In an effort to persuade her, he suggested thinking of an IPA as carbonated grapefruit juice, and lo and behold, she is now an IPA enthusiast.

Fast-forward to the summer of 2015 when Mike was solicited by a local business to create a specialty craft beer and it dawned on him he could create a grapefruit IPA using his flagship Solis recipe and adding fresh grapefruit from the backyard of his home in La Mesa. After picking hundreds of grapefruits from his tree with his children, Mike and his family hand-zested and squeezed the grapefruit to add to Solis #46.

After perfecting the recipe, Grapefruit Solis was added to Mike Hess Brewing’s menu as a flagship beer using a combination of Nugget, Cascade and Citra hops with two-row, melanoidin and Vienna malts. Grapefruit Solis takes the best out of a traditional San Diego IPA and combines it with a well-rounded flavor profile brought out by the citrus in the grapefruit. This recipe is the perfect example of fruit-infused beer.

We pack our hop-back with grapefruit zest just before fermentation and then, prior to packaging, we add in a dose of real grapefruit juice, doubling down for flavor-town. Light in color and dry in taste, this beer has a subtle malt component and a clean yeast profile. It’s like getting sacked in the face with a bag of grapefruit.”