In June of 1863, Confederate General Robert E. Lee decided to take the war to the enemy. On June 13, he defeated Union forces at Winchester, Virginia, and continued north to Pennsylvania. U.S. General Joseph Hooker, who had been planning to attack Richmond, was instead forced to follow Lee. Hooker, never comfortable with his commander, U.S. General Henry Halleck, resigned on June 28, and U.S. General George Meade replaced him as commander of the Army of the Potomac.

On July 1, a chance encounter between Union and Confederate forces began the Battle of Gettysburg. In the fighting that followed on July 2 and July 3, Meade had greater numbers and better defensive positions. He won the battle, but failed to follow Lee as he retreated back to Virginia. Militarily, the Battle of Gettysburg was the high-water mark of the Confederacy; it is also significant because it ended Confederate hopes of formal recognition by foreign governments. On November 19, President Abraham Lincoln dedicated a portion of the Gettysburg battlefield as a national cemetery, and delivered his memorable "Gettysburg Address."

Below, "Peace in Union, The Surrender of General Lee" by Thomas Nast. 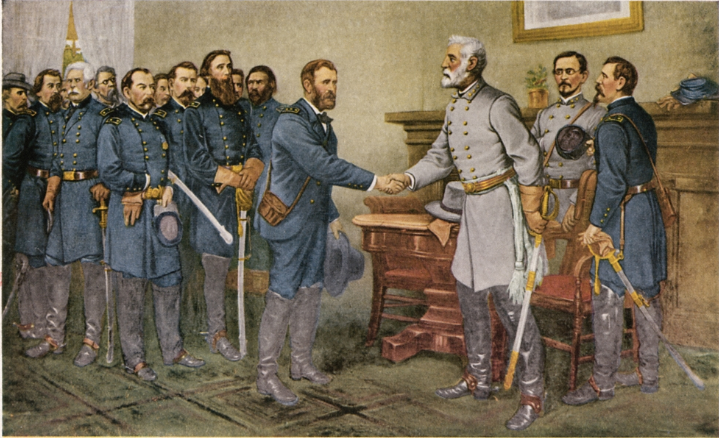