A few weeks ago this blog published a feature on the Louvre museum in Paris creating download capabilities for its entire collection. Viewers around the world may now see what is stored in this famed museum in Paris for free.

That PillartoPost.org posting became the most clicked feature in the 11 year history of this daily online blog that you are now reading.

In the spirit of art history exploration, we remind readers of the recently closed 150th Anniversary exhibition at the MET. But first please know five decades of Metropolitan Museum of Art publications on art history are available to read, download, and/or search for free CLICK HERE.

What a boon to have two of the world’s preeminent fine art museums putting their collections online and for free! 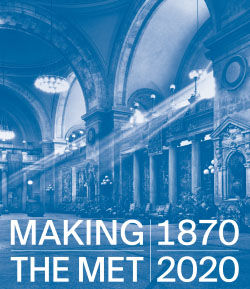 MAKING OF THE MET, THE BOOK

Published to celebrate The Metropolitan Museum of Art’s 150th anniversary, Making The Met, 1870–2020 by Andrea Bayer with Laura D. Corey examines the institution’s evolution from an idea—that art can inspire anyone who has access to it—to one of the most beloved global collections in the world.

Focusing on key transformational moments, this richly illustrated book provides insight into the visionary figures and events that led The Met in new directions. Among the many topics explored are the impact of momentous acquisitions, the central importance of education and accessibility, the collaboration that resulted from international excavations, the Museum’s role in preserving cultural heritage, and its interaction with contemporary art and artists.

Complementing this fascinating history are more than two hundred works that changed the very way we look at art, as well as rarely seen archival and behind-the-scenes images.

In the final chapter, Met Director Max Hollein offers a meditation on evolving approaches to collecting art from around the world, strategies for reaching new and diverse audiences, and the role of museums today. [Available through MET and Amazon].

Earlier this month, Google, as part of its cultural coverage, produced a feature showcasing the exhibition. CLICK HERE.

The following text in italics is from Google’s editorial: The Metropolitan Museum of Art was founded on April 13, 1870 and celebrated its 150th anniversary in 2020. In a flush of optimism following the American Civil War, a group of civic leaders, businessmen, and artists banded together to establish an art museum for New York City.

They began with a grand idea but without art, a building, or professional staff. Today, The Met holds more than 1.5 million objects spread over 2 million square feet and cared for by 1,600 staff members. 7 million visitors from around the world visit the Museum each year and over 30 million explore its offerings online. Making The Met traces the institution’s history through ten transformative episodes when the Museum’s course changed, evolving in tandem with world events and broader shifts in taste and society.

The Met’s first trustees had to build a collection from scratch. Early acquisitions ranged from Cypriot antiquities to American paintings, Pre Columbian sculpture, and musical instruments and armor from around the world, reflecting aspirations to become a global collection. The 150th anniversary exhibition was made possible by the Iris & B. Gerald Cantor Foundation. Lead corporate sponsorship is provided by Bank of America.

The following text and image captions of the museum's first locations are by PillartoPost.org: The Metropolitan Museum of Art in New York City had two temporary homes. The first and site of the grand opening on Feb. 20 1872 was located in the Dodworth Building at 681 Fifth Avenue. The second home was in the Harriet Douglas Mansion from 1873 to 1879 on West 14th Street. On March 30, 1880, the MET opened to the public at its current site on Fifth Avenue and 82nd Street.