DESIGN OF OUR TIMES / BUILDING THE BETTER MEDIA MOUSETRAP 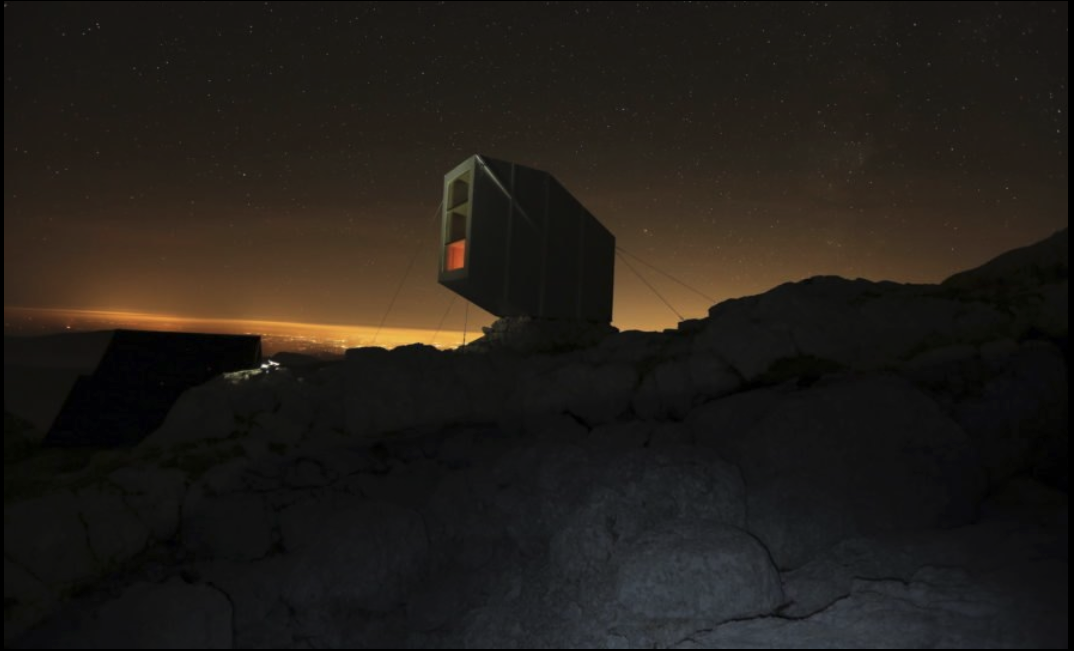 OFIS Architects has been in business since 1996 working from Ljubljana, Slovenia. During the career of the firm founders Rok Oman and Spela Videcnik have garnered their share of clients and architecture awards.

Recently, the firm released images of a mountain cabin it built for itself and as a result, its construction has become a media event. At least in the architectural media.

Proving once and for all if you’re looking to attract the attention of design publication giants like DeZeen, ArchDaily, Architectural Record, Elle Decor and countless others then trek to a lofty peak in the Julian Alps (a range that stretches from Italy to Slovenia because that’s where you build your media magnet mountain cabin.

For example, here’s what writer Lucy Wang wrote about the lofty cabin in Inhabit.com, a popular website: “…Despite all odds, Ljubljana-based studio OFIS Arhitekti succeeded in placing a rugged alpine cabin on remote Mount Kanin that boasts breathtaking 360-degree views over Slovenia and Italy.

"The self-contained and prefabricated Kanin Winter Cabin was airlifted into place atop Mount Kanin by helicopter.

“Made mostly from timber and aluminum, the smallish Kanin Winter Cabin is a handsome and modern structure precariously perched on a ledge overlooking stunning views to Triglav, Soca Valley, and the Adriatic Sea.

"The structure was prefabricated off-site and installed with help from the Slovene Armed Forces helicopter crew in an extremely difficult process that took three tries to complete due to bad weather. The partially cantilevered cabin is carefully placed to minimize impact on the ground and built to withstand the harsh weather conditions, including heavy snowfall that lasts over half the year, strong rainstorms, winds, and occasional earthquakes."

But at 104 square feet, the cabin is not perfect for company retreats (OK, if you’re a solo practitioner with friend or two).

The architects claim the cabin accommodates up to nine mountaineers.

The Winter Cabin was designed by OFIS Arhitekti in collaboration with CBD structural engineers, PZS, PD Bovec, JZS, Permiz d.o.o., and Ortar in Jerman d.o.o. The cabin was fully realized with donations and volunteer labor…” To date, the cabin is not available to the public. And, to get there you have to hike or borrow a helicopter. But, it’s perfect as a media attention device if you are an architectural firm headquartered in a city only James Bond can spell. 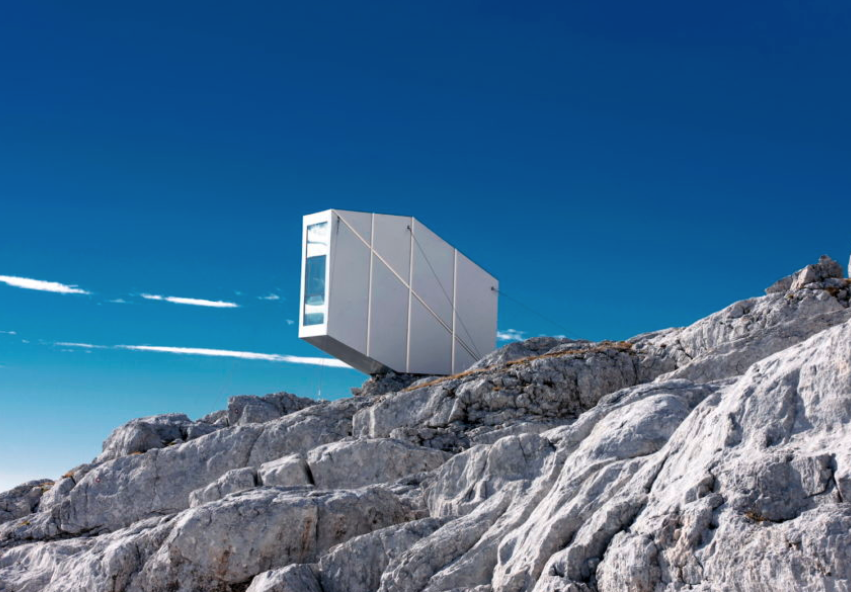 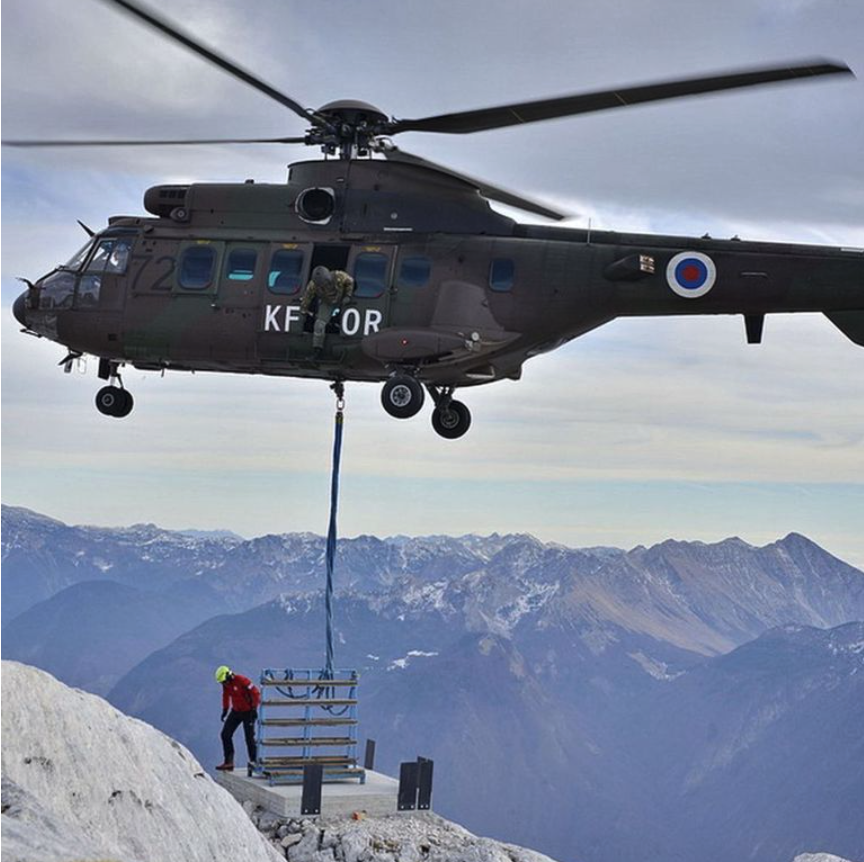 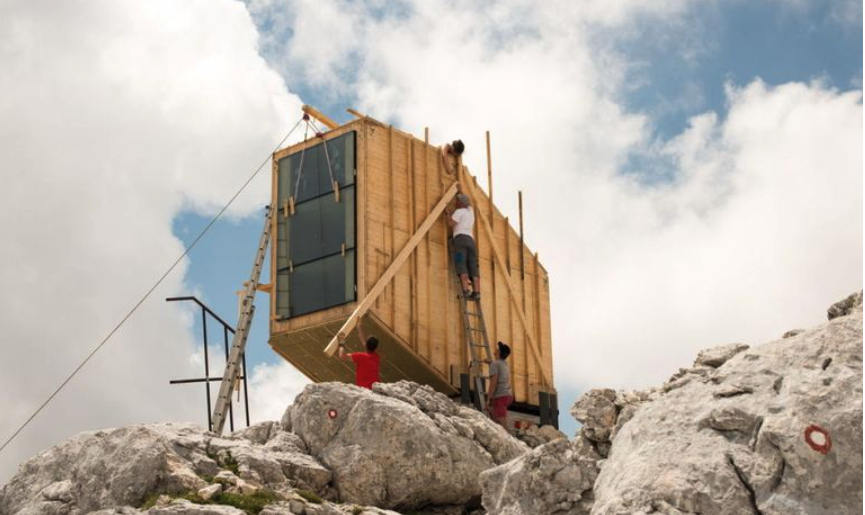 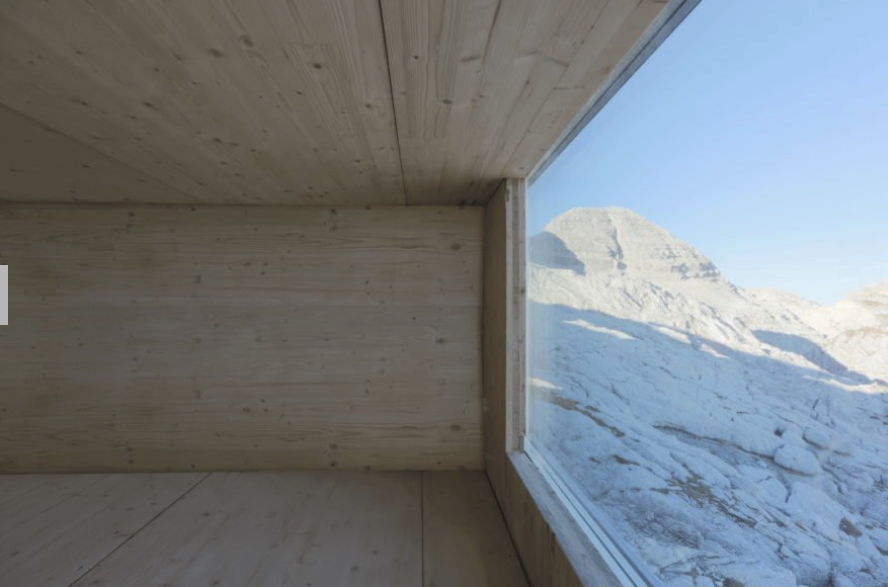