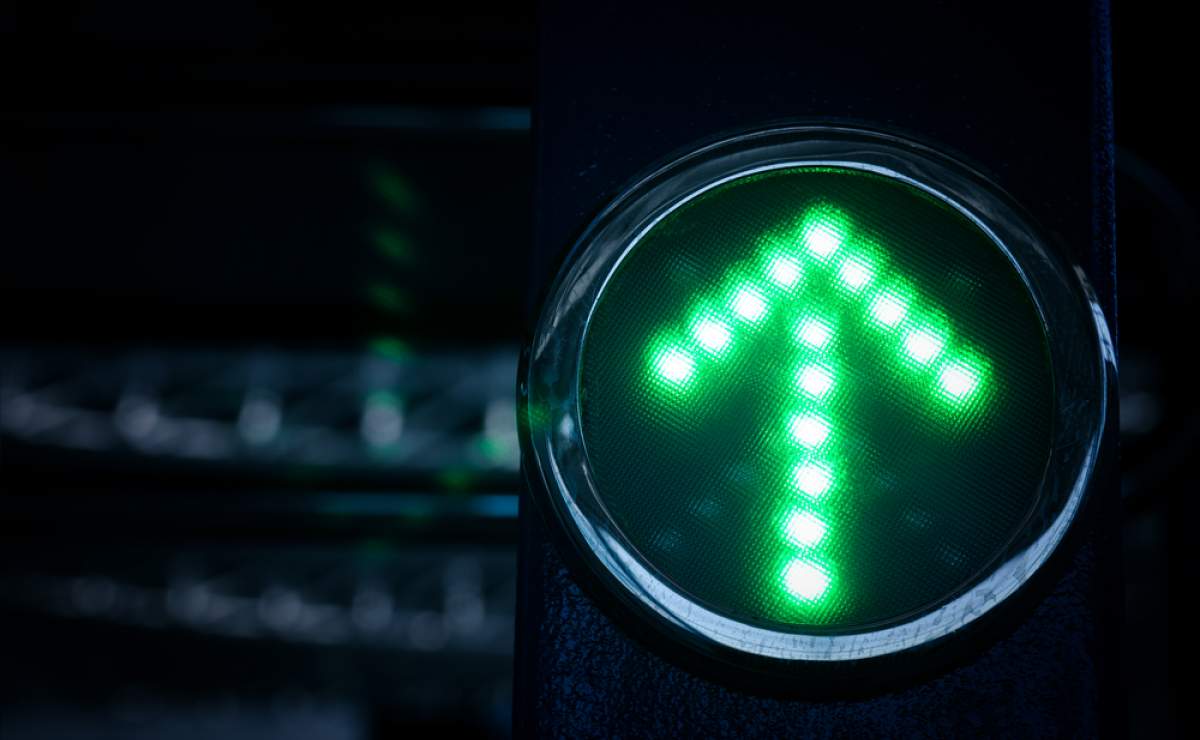 Rising Demand, Inflation and Earnings: Will the Gains Be Sustained?

Editor’s Note: As Edward Jones is the financial advisor of this daily online publication, permission has been granted to pillartopost.org to republish certain data to our readership.

3) rising earnings all point to an accelerating recovery.

Improving trends in consumer spending and corporate earnings will be key factors in extending the durability of the new economic expansion and bull market, while inflation pressures can be problematic if they persist. We'd offer the following takeaways on whether the gains in these three areas can be sustained and what that implies for the markets.

--Retail sales soared 9.8% last month compared with February, handily exceeding estimates and marking the second-fastest monthly acceleration in the last 30 years. The boost was largely driven by consumers spending a portion of their $1,400 stimulus checks that were part of the $1.9 trillion American Rescue Plan Act passed in March. Sales increased across all categories, with spending on big-ticket items remaining strong, as motor-vehicles sales rose 15%1.

--The notable pickup in spending in clothing stores (+18%) as well as restaurants and bars (+13%) suggests that the easing of restrictions and progress in vaccinations are leading consumers to start resuming their typical spending habits1. The gradual return to normalcy bodes well for spending on services, like travel and entertainment, which are not represented in the retail-sales data released last week. We believe there is substantial pent-up demand waiting to be unleashed, which will likely trigger a rebalance in consumer spending as the year progresses away from goods and towards services.

--Will the gains be sustained? It is reasonable to expect a pullback in spending as the one-time benefit from the government transfers fades. However, the three rounds of stimulus checks since last year have left consumers flush with savings. The U.S. personal saving rate stands nearly twice its pre-pandemic level. Assuming consumers reduce their savings as uncertainty subsides and the economy reopens, consumption will likely continue to rise, but at a more moderate pace. Also, the expected pickup in hiring and slowdown in job cuts will support incomes, potentially offsetting the need for further government assistance. And unlike the post-financial-crisis recovery, consumer balance sheets are healthy, with household net worth at record levels, courtesy of a rising stock market and home prices.

--With the inflation debate heating up this year, all eyes were on consumer prices last week. The Consumer Price Index (CPI) rose 0.6% in March from February and increased 2.6% from year-ago levels, the most since 2018. Energy was a major factor behind the jump, as gasoline prices rose almost 23% year-over-year. Core CPI, which excludes food and energy and better reflects the underlying trends, increased a more modest 1.6%, but also surprised slightly to the upside1.

--The pickup in inflation is attributable in part to easy comparisons from last year when lockdowns during the height of the pandemic led to broad price declines. However, higher prices also reflect the improvement in demand from consumers that showed up in the strong retail sales discussed above. Global supply disruptions to production contributed to higher inflation for goods, while prices for hard-hit services, such as hotels and airfare, also rose last month, getting a boost from the economic reopening.

--Even with inflation data coming in hotter than economists expected, long-term bond yields declined, and market-based inflation expectations were largely unchanged for the week. In our view, this indicates that markets have been anticipating inflation pressures for a while now. The muted reaction also speaks to the Fed's communication efforts, conveying the view that policymakers will look through any temporary price increases.

--Will the gains be sustained?

The trend in the next couple of months will likely be that of higher prices, as inflation in April, May and June of last year collapsed. Prices paid in the production process have risen, and companies will likely pass along the price increases to consumers with a small lag. Yet it remains unclear whether these pressures will persist beyond this year when the economy returns to its normal state. In our view, inflation will not run too hot for too long. The factors that contributed to low inflation during the previous expansion could again exert more downward pressure on prices than expected.

--In the near term, inflation readings could be a source of volatility, but even if inflation continues to surprise to the upside this year, that won't deter the Fed from maintaining its patient approach on policy. Under its new inflation-averaging strategy where policymakers seek to achieve inflation that averages 2% over time, the threshold for tightening is higher. For example, to make up the inflation shortfall over the last three years, the Fed's preferred measure of inflation would need to average 2.3% over the next three years. 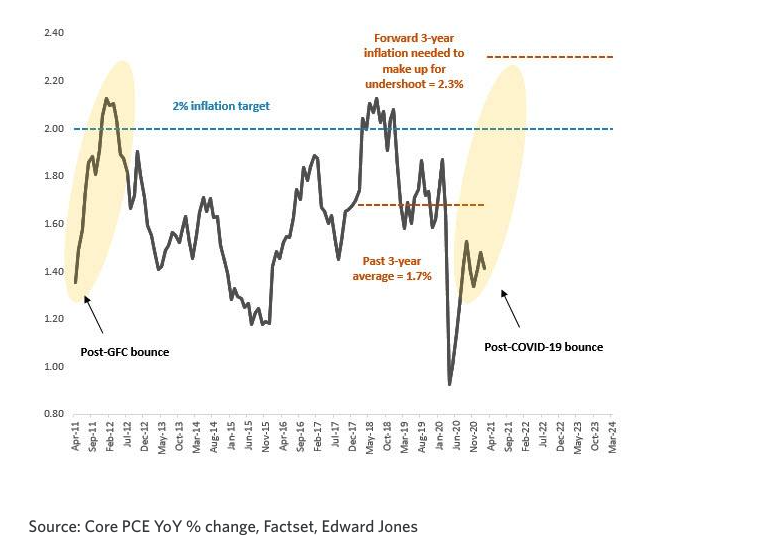 The graph above shows inflation trends as measured by the personal consumption expenditures price index. Inflation is expected to accelerate this year as demand recovers. Prices also jumped in 2011 but the inflation pressures quickly subsided as growth slowed.

--Earnings kicked off last week with several mega- and regional banks reporting first-quarter results. Corporate profits for all 13 banks comfortably exceeded estimates, driven by lower credit costs, robust trading, and investment banking revenue, partly offset by weak loan demand. The anticipation of a strong profit rebound has helped the financial sector return 19% this year, outperforming the S&P 5001. But the rally has also set a high bar for companies to clear. Even though actual earnings topped estimates by 36% on average for the 13 banks that reported, the average one-day performance following the earnings releases was a marginal -0.2% decline2.

--S&P 500 earnings are expected to grow almost 25% in the first quarter, the strongest growth rate since 20181. Fiscal stimulus, along with the reopening of the economy as vaccine momentum accelerates, is poised to drive healthy revenue growth compared with last year's levels. Profitability is also expected to recover, with investors looking for results to shed some light on the impact of input cost pressures and supply constraints.

--Will the gains be sustained?

Forward earnings are now exceeding the 2019 peak level by 3%1. We think that above-average economic growth over the next two years could translate into robust revenue and earnings growth for corporate America. Following the last three recessions, earnings continued to grow by an average of 83% once they reclaimed their prior peak (120% after the 1990-1991 consumer debt unwind, 70% after the tech bubble, and 60% after the Great Financial Crisis)3. Potential corporate tax hikes could clip some of the growth in 2022 but will likely be modest and won’t derail the upward trajectory, in our view.

Edward Jones Company believes economic and   corporate  fundamentals will continue to improve beyond   the coming quarter and year, but the rate of change will   slow. The upcoming transition from recovery to   expansion implies that we remain in the favorable part of   the business and market cycles. However, equity returns   are likely to moderate, and pullbacks are likely to   become more frequent, consistent with midcycle   conditions. A short-lived inflation scare will not be   enough to shift the Fed's view, but price pressures that   persist is a medium-term risk worth monitoring. 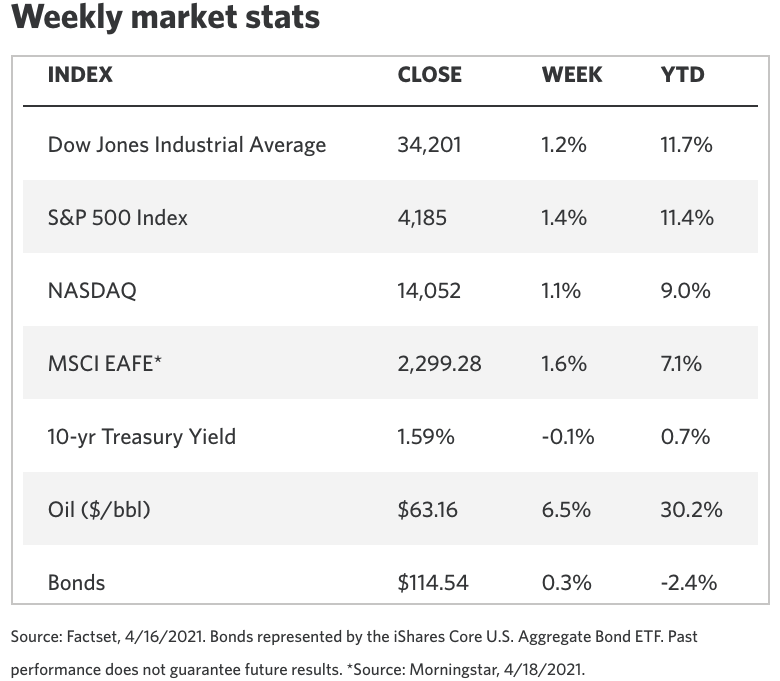