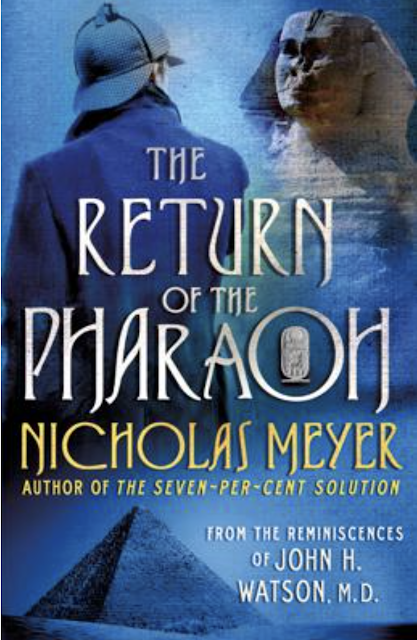 GUEST BLOG / BY ASHLEY DUONG, Book Reviewer, The Associated Press--A missing duke, the tomb of Thutmose IV and Sherlock Holmes all converge in “The Return of the Pharaoh,” the newest installment of Nicholas Meyer’s take on the adventures of the world-renowned detective.

Meyer’s book brings readers to early 20th century Egypt, when Watson and his second wife, Juliet, travel to the arid country to combat her tuberculosis. Through the sanitarium at which Juliet is staying, Meyer creates a reflection of present-day COVID-19 protocols: Not only must patients wear masks and gloves, but they are also required to sit at least 6 feet away from visitors.

A month into their stay, Watson bumps into none other than Sherlock Holmes, who is posing as a colonel. Holmes soon reveals that the Duchess of Uxbridge has employed his services to find her husband after he suddenly stopped responding to her letters during his stay in Egypt.

Known to be in great debt, the Duke of Uxbridge appears to have pinned his hopes on “egyptology”’ and unearthing the yet-to-be-discovered, treasure-filled tomb of a pharaoh (expected to be filled with treasures and gold) in order to settle his financial shortcomings. In their efforts to get to the bottom of the case, Watson and Holmes stumble upon a murder, discover a spy, expose an affair and survive a deadly sandstorm.

Meyer paints a vivid picture of a former and less established Egypt, acknowledging the pillaging of artifacts by Western countries like Britain and France. Written in the style of Arthur Conan Doyle’s original books, Meyer’s take on the Sherlock Holmes adventures blends old with new, giving readers familiar stories with parallels to and hints of more modern takes.