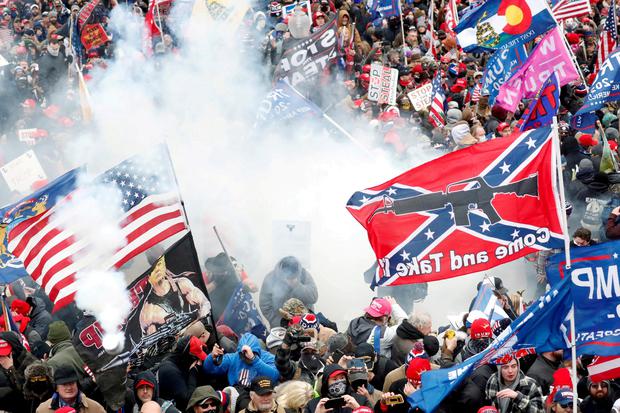 New Focus on How a Trump Tweet Incited Far-Right Groups Ahead of Jan. 6--The New York Times.

Federal prosecutors and congressional investigators are documenting how the former president's "Be there, will be wild!" post became a catalyst for militants before the Capitol assault. --The New York Times.

GUEST BLOG / By Alan Feuer, Michael S. Schmidt and Luke Broadwate, Reporters The New York Times--Federal prosecutors and congressional investigators have gathered growing evidence of how a tweet by President Donald J. Trump less than three weeks before Jan. 6, 2021, served as a crucial call to action for extremist groups that played a central role in storming the Capitol.

Trump's Twitter post in the early hours of Dec. 19, 2020, was the first time he publicly urged supporters to come to Washington on the day Congress was scheduled to certify the Electoral College results showing Joseph R. Biden Jr. as the winner of the presidential vote.

His message - which concluded with, "Be there, will be wild!" - has long been seen as instrumental in drawing the crowds that attended a pro-Trump rally on the Ellipse on Jan. 6 and then marched to the Capitol.

The Justice Department's criminal investigation of the riot and the parallel inquiry by the House select committee have increasingly shown how Trump's post was a powerful catalyst, particularly for far-right militants who believed he was facing his final chance to reverse defeat and whose role in fomenting the violence has come under intense scrutiny.

Extremist groups almost immediately celebrated Trump's Twitter message, which they widely interpreted as an invitation to descend on the city in force.

Responding to the president's words, the groups sprang into action, court filings and interviews by the House committee show: Extremists began to set up encrypted communications channels, acquire protective gear and, in one case, prepare heavily armed "quick reaction forces" to be staged outside Washington.

They also began to whip up their members with a drumbeat of bellicose language, with their private messaging channels increasingly characterized by what one called an "apocalyptic tone."

Directly after Trump's tweet was posted, the Capitol Police began to see a spike in right-wing threats against members of Congress. Prosecutors have included examples in at least five criminal cases of extremists reacting within days - often hours - to Trump's post.

One of those who responded to the post was Guy Wesley Reffitt, an oil-field worker from Texas who this month became the first Jan. 6 defendant to be convicted at trial. Within a day of Trump's Twitter post, Reffitt was talking about it on a private group chat with other members of the far-right militia organization the Texas Three Percenters. "Our President will need us. ALL OF US‚Ä¶!!!

On January 6th," Reffitt wrote. "We the People owe him that debt. He Sacrificed for us and we must pay that debt." The next day, prosecutors say, Reffitt began to make arrangements to travel to Washington and arrive in time for "Armageddon all day" on Jan. 6, he wrote in the Three Percenters group chat. He told his compatriots that he planned to drive because flying was impossible with "all the battle rattle" he planned to bring - a reference to his weapons and body armor, prosecutors say.

Some in the group appeared to share his anger. On Dec. 22, one member wrote in the chat, "The only way you will be able to do anything in DC is if you get the crowd to drag the traitors out." Reffitt responded: "I don't think anyone going to DC has any other agenda."

The House committee has also sharpened its focus on how the tweet set off a chain reaction that galvanized Trump's supporters to begin military-style planning for Jan. 6. As part of the congressional inquiry, investigators are trying to establish whether there was any coordination beyond the post that ties Trump's inner circle to the militants and whether the groups plotted together.

"That tweet could be viewed as a call to action," said Representative Pete Aguilar, Democrat of California and a member of the committee. "It's definitely something we're asking questions about through our discussions with witnesses. We want to know whether the president's tweets inflamed and mobilized individuals to take action."

On the day of the post, participants in TheDonald.win, a pro-Trump chat board, began sharing tactics and techniques for attacking the Capitol, the committee noted in a report released on Sunday recommending contempt of Congress charges for Dan Scavino Jr., Trump's former deputy chief of staff. In one thread on the chat board related to the tweet, the report pointed out, an anonymous poster wrote that Trump "can't exactly openly tell you to revolt. This is the closest he'll ever get.''

Lawyers for the militants have repeatedly said that the groups were simply acting defensively in preparing for Jan. 6. They had genuine concerns, the lawyers said, that leftist counterprotesters might confront them, as they had at earlier pro-Trump rallies.

Trump's post came as his efforts to hang onto power were shifting from the courts, where he had little success, to the streets and to challenging the certification process that would play out on Jan. 6. A week before his message, thousands of his supporters had arrived in Washington for the second time in two months for a large-scale rally protesting the election results.

The event on Dec. 12, 2020, which Trump flew over in Marine One, showed his ability to draw huge crowds of ordinary people in support of his baseless assertions that the election had been stolen. But it also brought together at the same time and place extremist and paramilitary groups like the Proud Boys, the Oath Keepers and the 1st Amendment Praetorian, who would be present on Jan. 6.

On Dec. 14, the Electoral College met and officially declared Mr. Biden the winner of the election. But behind closed doors, outside advisers to Trump were scrambling to pitch him on plans to seize control of voting machines across the country. The debate over doing so came to a head in a contentious Oval Office meeting that lasted well into the evening on Dec. 18, 2020, and ended with the idea being put aside.

Almost at once, shock waves rippled through the right. At 2:26 a.m., the prominent white nationalist Nicholas J. Fuentes wrote on Twitter that he planned to join Trump in Washington on Jan. 6. By that afternoon, the post had been mentioned or amplified by other right-wing figures like Ali Alexander, a high-profile "Stop the Steal" organizer.

But Trump's message arguably landed with the greatest impact among members of the same extremist groups that had been in Washington on Dec. 12.

On Dec. 15, Stewart Rhodes, the leader and founder of the Oath Keepers, posted an open letter to Trump urging him to invoke the Insurrection Act. The next day, the national council of the Three Percenters Original group issued a statement, saying their members were "standing by to answer the call from our president."

Once the call came, early on Dec. 19, the extremists were ecstatic.

Stewart Rhodes, the leader and founder of the Oath Keepers, declared a few days after Trump's tweet that there would be "a massively bloody revolution" if Joseph R. Biden Jr. ever took office.

That same day, Rhodes did an interview with one of his lieutenants and declared that there would be "a massively bloody revolution" if Mr. Biden took office. On Dec. 23, Rhodes posted another letter saying that "tens of thousands of patriot Americans" would be in Washington on Jan. 6, and that many would have their "mission-critical gear" stowed outside the city.

The letter said members of the group - largely composed of former military and law enforcement personnel - might have to "take arms in defense of our God-given liberty." By the end of December, court filings say, the Oath Keepers had reserved three hotel rooms in Arlington, Va. The rooms were meant as a staging ground for three teams of armed militiamen poised to rush across the river into Washington on Jan. 6 if needed.

On New Year's Eve, court papers say, one team member from Arizona told Rhodes that his men were ready. "Everyone coming has their own technical equipment and knows how to use it," the militiaman wrote in an encrypted message to his leader.

By then, prosecutors say, Rhodes seemed set on action. "There is no standard political or legal way out of this," he wrote to his group. The Proud Boys - who had long been some of Trump's most ardent supporters - also viewed his message as a clarion call, prosecutors say.

On the same day it was posted, Joseph Biggs, a Proud Boy leader from Florida, sent a private message to the group's chairman, Enrique Tarrio, suggesting that they had to start recruiting better members - "not losers who wanna drink," as he put it. "Let's get radical and get real men," Mr. Biggs wrote.

The next day, Mr. Tarrio established a crew of "hand-selected members" for rallies that was known internally as the Ministry of Self-Defense, or MOSD, according to an indictment released this month. As MOSD turned its attention to Jan. 6, court papers say, Mr. Tarrio set up an encrypted Telegram chat for the group.

Two days after Christmas, Charles Donohoe, a Proud Boys leader from North Carolina, posted a message complaining that local officials in Washington appeared to be planning to restrict access to the city on Jan. 6. "They want to limit the presence so they can deny Trump has the People's support," Mr. Donohoe wrote. "We can't let them succeed."

The next week, another MOSD member posted a message reading, "Time to stack those bodies in front of Capitol Hill."

A third member raised the prospect of a mob of "normies" - or normal people - pushing through police lines and breaking into the Capitol.

At the same time, prosecutors say, other Proud Boys were setting up crowdfunding campaigns for travel expenses and "protective gear and communications."

As the year came to an end, Tarrio posted a message on social media saying that the Proud Boys intended to "turn out in record numbers on Jan. 6th" but this time "with a twist."

"We will not be wearing our traditional Black and Yellow," he wrote, a reference to the Fred Perry polo shirts favored by the group. "We will be incognito and we will be spread across downtown DC in smaller teams."

On Dec. 21, the intelligence arm of the Capitol Police issued a 7-page report tracking an increase in activity on TheDonald.win, which made threatening references to potentially trapping lawmakers in the tunnels of the Capitol.

The report listed militia groups expected to descend on Capitol Hill for Jan. 6, including the Proud Boys and the Oath Keepers. The report also stated that Trump supporters were promoting "confronting members of Congress and carrying firearms during the protest."  It included more than two dozen comments from posters, including: “Forget the tunnels. Get into Capitol Building.” “Surround every building with a tunnel entrance/exit. They better dig a tunnel all the way to China if they want to escape.” And: “Bring guns. It’s now or never”