BROTHER, CAN YOU SPARE ANOTHER SPARK PLUG.

By Holden DeMayo / Editor, PillartoPost.org / The natives remarked the afternoon squall was no big deal mas y menos for spring in the tropics. For us, being from San Diego, we were not prepared for the seven inches of rain that we experienced after leaving a bus tour of Ernest Hemingway’s “Finca” estate outside of Havana.

That much rain in one afternoon equals what Southern California gets during an entire year. Nor were we prepared for the flooded streets, the ear-busting thunder clasps, and being totally drenched running ten yards from the bus to the safety of the Hotel Nacional de Cuba’s front door.

“It makes for a good story, no?” Our Havana bus driver winked.

Indeed, bus windows were pelted with liquid shrapnel, splashing its way through hubcap high rivers that widened or created new potholes over ancient streets. We saw a few Havana drivers spin out of control with one 1952 Chevrolet ending up between palms on the boulevard’s grassy median.

Our bus driver was too experienced. No one, especially our guides wore faces of concern. Mike, our youngest son, however, who joined my wife and me on the journey overheard our tourist/chaperones complain in Spanish that it’s always the Americans that make the bus late leaving Hemingway’s farmhouse. Our hosts knew the cloud bursts show up like clockwork and it is best to speed back to the hotel by 3 pm before the streets become a poor man’s Venice.

Mike spent a year in Madrid attending college classes. His Spanish was excellent. We noticed after he turned to our guides and wagged a finger at them that they didn’t speak off the record in any language for the remainder of our group tour. They teased him for being an “espia” they didn’t expect.

Our rooms gave us views of the Caribbean, Malecon and the famed Nacional’s courtyard, now littered with wind-blown palm fronts and lost feathers from indignant peacocks racing for cover. Mike flew open the screenless casement window of our fifth-floor rooms to be one with nature. His zen was short-lived. Cool, high humidity breezes entered followed by an explosion and a vivid white flash from lightning directly above the 1930 Spanish eclectic style hotel.

Our ears rung for long minutes afterward reminding us how lucky we were to dodge the elements. New aromas wafted in. We could smell the ozone and the saltiness in the air. The clouds soon parted. Our vista was now painted in the pastel colors of a Cuban sunset. 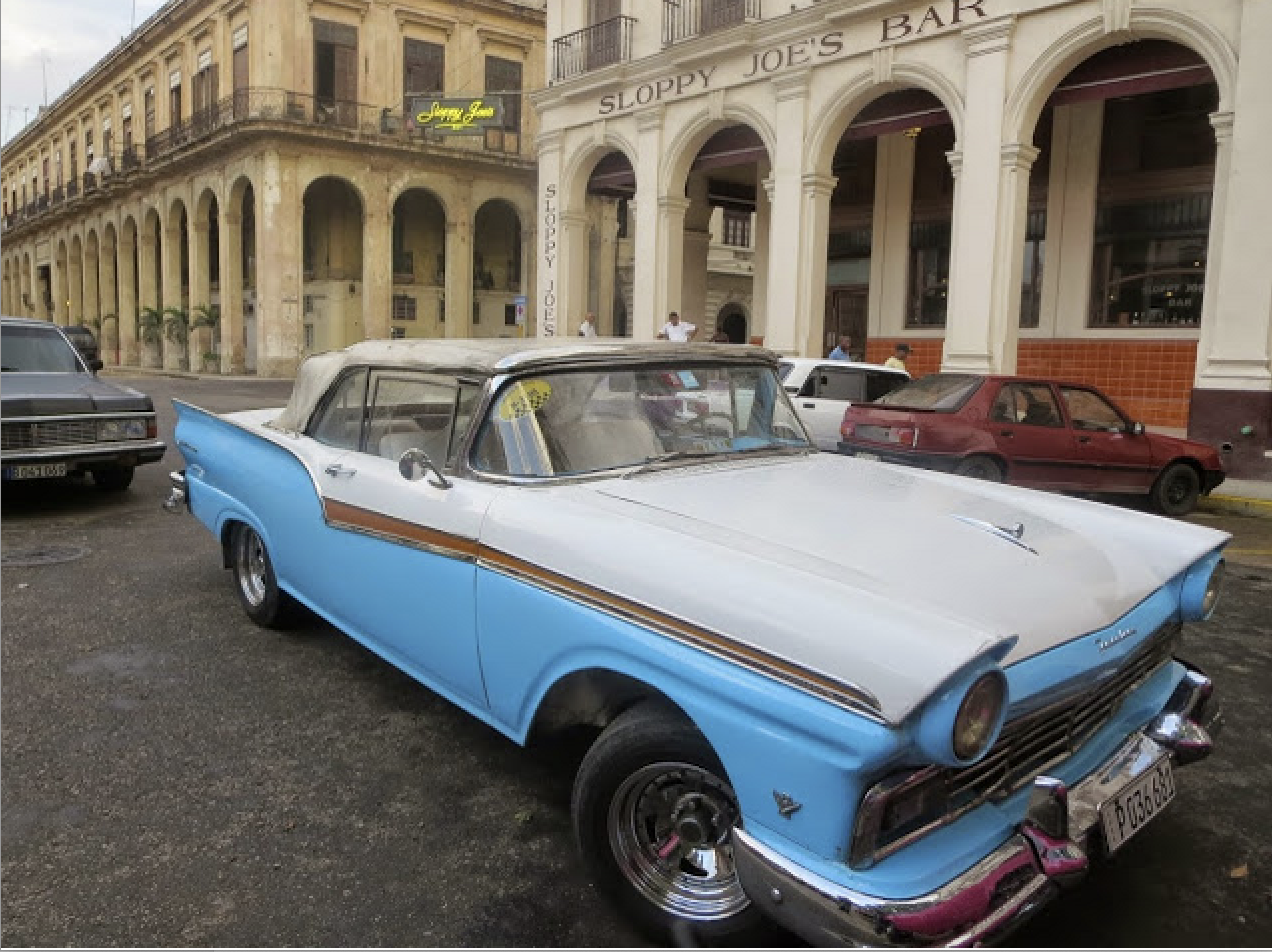 Phyllis elected to join our traveling companions for dinner in the courtyard restaurant while my son and I headed for Sloppy Joe’s bar in the old part of Havana. If you’ve seen the vintage flick with Alec Guinness in “Our Man in Havana,” you’ll recognize the Sloppy Joe’s and see many of the taxi’s when they were brand new.

The years have been good to the bar judging by viewing the movie before we left and a first hand investigation. From our hotel, we hired a cab, a blue and white 1959 Ford Fairlane convertible driven by Rodrigo. The top was up because it was still drizzling from what we believed was a typhoon.

The cabbie shrugged: it rains every afternoon in Spring. We asked what was wrong with the muffler? It sounded like a train. He seemed a bit offended because he insists he had bought it from his brother-in-law, who recently renovated it. We learned the noise was from the Czech tractor engine that had been squeezed into the Ford. The tires and gasoline were from Venezuela and the transmission was from Russia. All regular trading partners with Cuba since the Cuban Revolution of 1959.

As quickly as Vladimir Putin started the war, the free world slapped economic sanctions on all things Soviet. Although unintended, world sanctions against Putin created a crisis in Cuba. Sanctions on transport and trade with Russia pose an especially serious problem for Cubans, whose socialist government has lived since the early 1960s under an embargo imposed by the nearby United States. Much of the island’s fleets of trucks, buses, cars, and tractors came from distant Russia and are now aging, in need of parts. Especially when the Caribbean island has 20,000 old American cars and between 80,000 and 100,000 Russian-made Ladas.

So, if Cuban transportation is going to keep rolling, the nation will have to improvise even more than it has for decades: make do and reinvent and beg, borrow or appeal to friends to send over spare parts.

And, perhaps whisper in Mr. Putin’s ear to stop his damn war.