The hills are live with arts & crafts era residences

Cognoscenti of important early 20th century Arts & Crafts design in the San Francisco East Bay readily acknowledge the dominance of period architects such as Julia Morgan, Bernard Maybeck and John Galen Howard. These three giants called the Oakland/Berkeley side of the bay home. While the world has bestowed laurel upon laurel on Morgan’s (Hearst Castle), Maybeck’s Palace of Fine Arts and Howard’s UC Berkeley campus and Sather, Arch, Gate and Tower), an avid corps of historically minded East Bay individuals, like history activist/lecturer Tim Hansen and organizations like the Berkeley Architectural Heritage Assn. (BAHA), remind us there are more unsung Arts & Crafts landmarks by the “Big Three” and others worthy of a visit.

Boots on the ground. Invention is your guide here as there are no wrong paths to take as you fan out in all directions to view the extant variety of styles within the genre. Most examples here are drive-by viewable but more can be explorable by foot or bike along these curb-less, tree-lined narrow roads.

Ardent preservationists and garden buffs like conservationist Charlie Bowen point out many groups offer local history and garden tours/walks. Two good sources of parks and history walks in the East Bay are the Berkeley Path Wanderers: www.berkeleypaths.org. and John Steare, President of the Berkeley Partners for Parks, www.bpfp.org

Today the garden offers a why-you-came view of San Francisco Bay and the Golden Gate Bridge and is home to 250 types of roses found on more than 3,000 bushes. While the public Rose Garden isn’t distinctively Arts & Crafts (WPA-ed in mid-1930s), the surrounding Berkeley Hills ‘hoods certainly are.

Literally the East Bay hills are alive with the sights of Craftsman design. Nearby lanes are prolifically dotted by homes and enclaves designed by the prominent architects of the era. For a must-read study of what these historic architects created see Berkeley Architect Heritage’s website and detailed landmark guide: CLICK HERE.

Oakland’s Riley Doty, a local walking tour pioneer and historic tile pro expert, says a block away from the Rose Garden is Maybeck’s designed Rose Walk. The Walk is a one-block residential salute to vintage style and leads to 1401 Le Roy Avenue, the 1912 home of John Galen Howard. Clearly visible is the brown shingle style (mostly cedar) exterior so common in the area between 1900-15.

La Loma is just one of countless nooks and crannies of inspired period homes tucked into the hills. Finding more on your own is your reward. Around the Campus. If you follow La Loma or Euclid Avenues south you’ll reach the University of California/Berkeley.

As you enjoy a stroll through the main campus (designed initially by U.S. icon architect Frederick Law Olmsted), stop by the Faculty Club. This remarkable example of the Arts & Crafts style was designed in 1903 by a collaboration of architects, including Maybeck and Howard. It has been lovingly restored by dedicated period preservationists and currently is in a fundraising mode to do more. Phyllis Brooks Schafer, an area Arts & Crafts aficionado, and former Faculty Club board member of the notes for a keen close up look of the club and grounds, the private club’s restaurant and hotel facilities are open to the public.
At the southern outskirts of campus is the William R. Thorsen House, a 1912 residence designed by architects Charles and Henry Greene, one of only five remaining G&G homes still standing. Now, a fraternity house, the Thorsen House, 2307 Piedmont Avenue, has kept much of its outward charm amid encroaching campus and commercialization. Interestingly, Sigma Phi members are fairly laid back and have been known on occasion to answer knocks on the door and provide impromptu tours of the public rooms of the house. 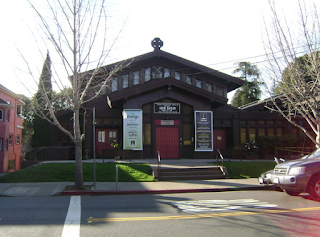 Nearby, are other fairly remarkable yet lesser-known (nee religious) landmarks within walking distance of the University. Julia Morgan, California’s first licensed woman architect, designed St. John’s Presbyterian Church in 1908. As a testament to the structure’s versatility, the shingled edifice now sees the light as a popular Julia Morgan Center for the Arts, a live theatre venue at 2640 College Avenue.

Another A&C church, which genesised as the First Unitarian Church by architect Albert C. Schweinfurth (a peer of Maybeck and San Francisco’s icon architect Willis Polk at A. Page Brown’s famed design firm in the City), is now a campus drama/arts dance studio at 2401 Bancroft Way (below). 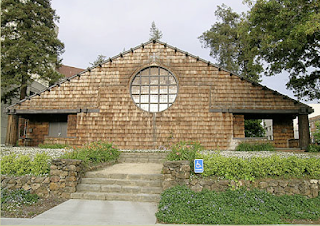 Schweifurth’s redwood structure with shingled flying buttress ornamentation is remarkably in tact. Into the Hills. Tim Hansen, a local preservationist, and vintage architecture expert, points out one of the almost unknown Arts & Craft era structures in the area is hiding in plain sight atop Tilden Park. Built by the Hershell-Spillman Co., in 1911, the park’s merry-go-round is one of only five remaining A&C carousels still in operation. If you opt for a $2 ride, note that the carousel is only open on weekends.
Down from Tilden Park, Oakland’s venerable 1913 Chick residence is about to celebrate its 100th anniversary. One of its owners Foster Goldstrom gets credit for giving this classic example of Arts & Crafts design the loving care it deserves. The Chick House isn't super visible, it's high up the hill from its frontage on Chabot Road and can be viewed somewhat from above from Roble Road. The owner often opens the house for events, but not for unannounced lookee-lous. Nonetheless, as the photos show, the Chick residence is a remarkable example of Bernard Maybeck’s expertise as a residential architect and developer.