ELECTION TUESDAYS / WIZARD OF THE WARDS 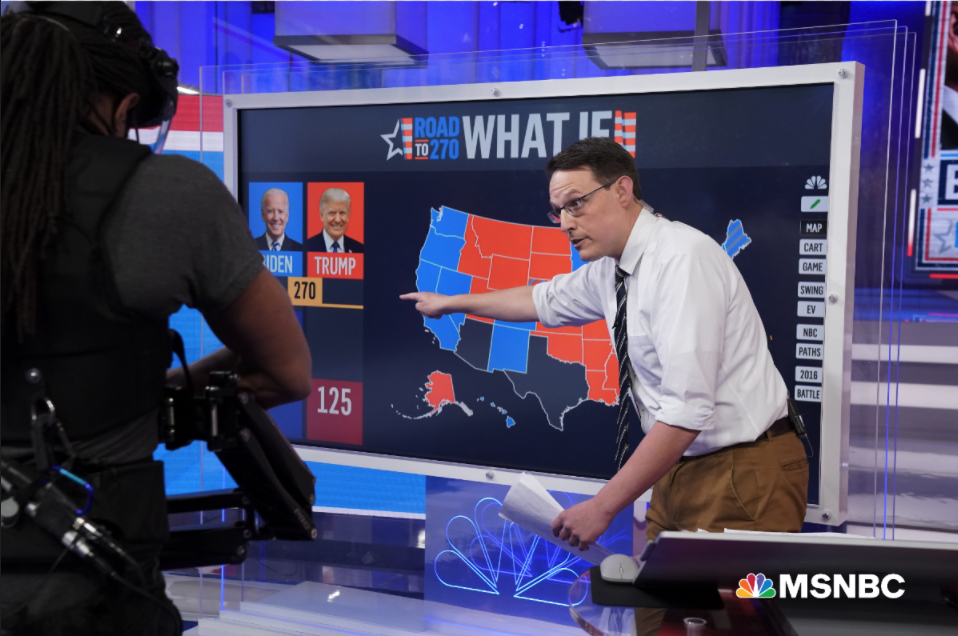 Behind the scenes with MSNBC’s Steve Kornacki, who’s helping save democracy with that big map

GUEST BLOG / By Senior Media Columnist Tom Jones, The Poynter Report--If you closely follow national elections on TV, you know this guy: Steve Kornacki. The MSNBC/NBC News analyst, all hopped up on Diet Coke and wearing his trademark khakis and rolled up sleeves, stands in front of the big map and furiously yet assuredly brings viewers everything they need to know about the votes.

Big cities, small towns, counties in the middle of nowhere? Kornacki has the numbers — and the why and how behind those numbers. He’s become something of a cult figure for political junkies. It feels like he’s been around forever. But this November’s midterms will be Kornacki’s fifth national election night for MSNBC.

Over that time, two things, in particular, have changed since his first night in front of the big board during the 2014 midterms. One, the interest in politics and elections has ramped up, especially since Donald Trump entered the political arena.

And two, elections are conducted differently, with wrinkles such as early voting and voting by mail. “It has really transformed how the vote count happens in most states,” Kornacki told me during a phone interview late last week.

It’s part of NBC News ramping up coverage with just 100 days until midterms. Already the election season is in full swing with primaries, including many in the month of August. But again, to be clear, he’s more than someone adding up numbers and pointing at a map.

He’s helping to explain where votes are coming from, why they are coming in when they are, and why a candidate’s lead might shift from way ahead to far behind over the course of hours or days. This is not an overstatement: At a time when so many cast doubts on the legitimacy of elections, Kornacki plays a key part in defending our democracy. “That’s a huge part of it and I feel that, definitely,” Kornacki said. “There are a lot of places where I think there is almost an unreasonable burden that has been placed on the public to try to understand the pattern or results. …

"The bottom line," adds Kornacki, "is that the average voter tuning in to find out who won an election in a lot of states is going to get understandably confused watching these wild swings that can take place. And trying to understand how it can take days for the votes to come in and trying to make sense why three days after the election has taken place, there’s still a hundred thousands votes from X county yet to come out.”

Kornacki continued, “I make it a priority to really try to understand on my own exactly what the nuances are in every state and every country.” He then takes those nuances — hundreds of them — and shares them with the viewers, explaining why you might see an extreme shift in the tabulation of votes, and ultimately, why an election is legitimate.

He also has a good sense of how things might turn out, and already has a feel for this November based on what we’ve seen so far in the primaries. Turnout for Republicans in the primaries has increased a lot more than it has for the Democrats. The 2018 primaries were just the opposite and, Kornacki said, “It ended up being a portent of the blue wave that November.” The trend this year could bode well for Republicans come November. “Traditionally the most dependable marker heading into a midterm is the president’s approval rating,” Kornacki said.

Right now, President Joe Biden’s numbers are way down, falling below 40%. “If you were somehow to move into the mid- to high 40s,” Kornacki said, “the Democrat prospects would increase dramatically. But right now what the Democrats are trying to pull off is something that’s, historically, kind of without precedent in modern times.” That, too, bodes poorly for Democrats. “What Democrats are trying to pull off is they believe there is a slice of the electorate that is skeptical of the Republican Party, but very disappointed with Biden,” Kornacki said, “and they’re trying to find messages that will get those voters to the polls more motivated to vote against Republicans than to vote against Biden.”

That message could center around several hot-button topics — issues that have always been at the forefront of politics but have taken on even greater significance in recent months: guns, the economy and, especially, abortion.

As far as the battle for Congress, Kornacki said Republicans have a strong hand in House races, so he is concentrating more on the Senate — especially races in Pennsylvania, Georgia and Wisconsin, which he said, “could be the closest race in the country.” “Are we looking at an election where it’s going to be suspenseful in November — is it going to come down to one state that decides the whole Senate?” Kornacki said.

“Or is something going to happen in the next few months that is going to just break this campaign open?”

Whatever happens, Kornacki and his big map will track it