GUEST BLOG / By Mona Mahajan, Senior Investment Strategist, Edward Jones Company – Equity markets fell over 2% last week, as market sentiment seemed to turn lower after a more hawkish Fed meeting and weakening retail-sales data, and despite better-than-expected CPI inflation data for November. Overall, the Fed (and global central banks) remain vigilant for now, but as inflation moderates and the economy softens in the months ahead, there may be less need for peak restrictive policy. While this transition may take some time, and markets could be more volatile in the near term, we may see a better market backdrop as we head toward the back half of 2023. We discuss five key takeaways from this week's data and our outlook on each below.

Consumer price index (CPI) inflation came in cooler than expected: We believe inflation will continue to moderate through 2023

Figure 1. As mortgage rates have risen this year, home-price and rental-price appreciation has moderated 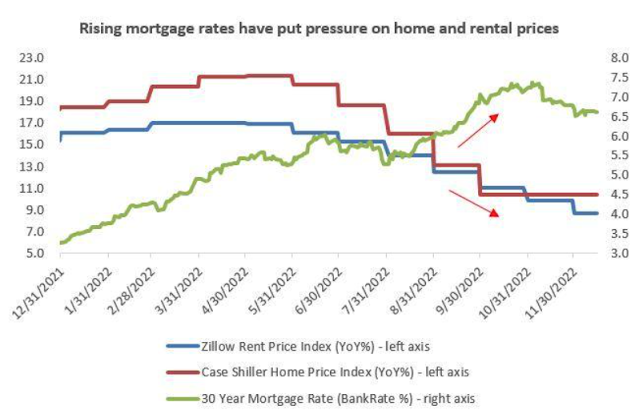 The chart above shows the falling rent and case Shiller price index as mortgage rates have moved higher. Source: Bloomberg CPI inflation data for November came in below expectations, with headline inflation of 7.1% year-over-year versus expectations of a 7.3% figure.

Core inflation came in at 6.0%, also below forecasts for 6.1% and lower than last month's 6.3%. Overall, inflation is trending in the right direction, although CPI remains elevated and well above the Fed's 2.0% target. Goods inflation continues to ease, with areas like used cars, apparel and even toys showing moderating price pressures. Parts of services inflation, including medical and transportation services (like airline fares), were lower this month. However, core shelter and rent prices in the CPI basket remained elevated. In our view, the CPI shelter and rent components remain lagging indicators, and leading and coincident indicators of the housing and rental markets are notably weakening. For example, as mortgage rates have risen, we have seen downward pressure on both home prices and rental prices. Over time, we believe that the core CPI index will reflect the weakening in housing and rental markets as well, and we could see core inflation head towards 3.0% by year-end 2023.

The Fed raises interest rates by 0.50% and indicates a 5.1% peak fed funds rate: We see markets and the Fed converging around a 5.0% terminal rate 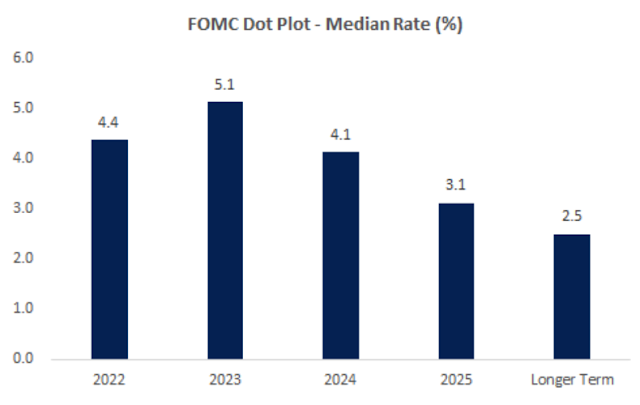 The chart above shows the Federal Reserve dot plot that shows rates at 5.1% in 2023, higher than before the recent Fed announcement. Source: Bloomberg.

As expected, the FOMC raised rates by 0.50% at its December meeting last week, bringing the fed funds rate to about 4.5%. Perhaps what was less expected by markets was that the Fed's "dot plot," or estimates of where interest rates are headed, indicated a peak fed funds rate of 5.1% in 2023. This rate was slightly above market consensus of 4.8% - 5.0% heading into the meeting, although not meaningfully above market expectations. In his comments, Fed Chair Powell went out of his way to say that while recent inflation data has been encouraging, inflation broadly remains elevated and well above the Fed's 2.0% target.

Fighting inflation continues to remain its top priority, not the impact of higher rates on economic growth. However, even after this week's Fed meeting, market expectations for the peak fed funds rate remain around 5.0%, perhaps indicating that markets don't believe that the Fed will need to take rates materially higher. In our view, the Fed and markets seem to be converging around a 5.0% peak rate, which likely implies perhaps two rate hikes of 0.25% each remaining in this cycle. Historically, the 12 months after the peak fed funds rate can be positive for both equity and bond markets.

While the Fed acknowledged that pausing rate hikes at some point (likely in the first quarter) was likely, Chair Powell and team noted that it was too soon to discuss rate cuts. Their own projections do not include rate cuts until 2024, and the Fed has indicated it will remain restrictive with its monetary policy until inflation clearly heads back toward 2.0%. Nonetheless, in our view, if inflation continues to moderate and the economy is weakening, the Fed may not need to keep interest rates at peak restrictive levels. While the Fed may not execute rate cuts next year, we believe it could signal lower rates by the end of next year, which would be a positive driver of market sentiment broadly. Notably, markets also continue to expect rate cuts towards the end of 2023.Figure 3. Markets continue to expect Fed rate cuts by year-end 2023 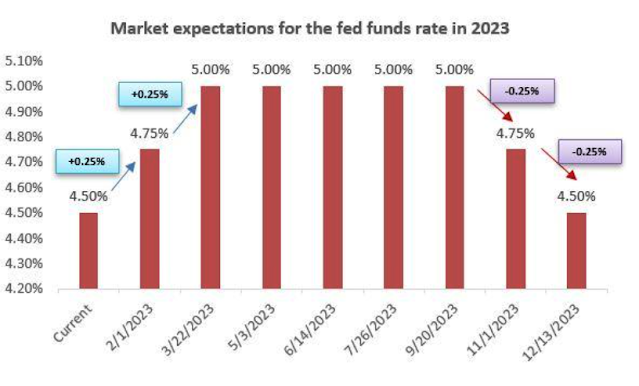 The chart above shows the expectations for rate hiked in 2023, with cuts expected in late 2023. Source: Bloomberg

Global central banks raise rates by 0.50% alongside the Fed: We see global tightening continuing through the first quarter of 2023 before potentially pausing

Last week, the Bank of England and the European Central Bank (ECB) also raised their policy rates by 0.50%, bringing the Bank of England's target rate to 3.5% and the ECB's to 2.0%. Like the Fed, these central banks reiterated the message that further rate hikes are likely, as inflation remains well above target ranges. In our view, it is likely that the global economy will fall into a downturn in the first half of 2023, with Europe perhaps entering a deeper recession than the U.S. given its exposure to oil and energy markets and steadily falling consumer confidence. In this backdrop, we see global central banks potentially pausing their rate-hiking campaigns, perhaps by the end of the first quarter, to alleviate pressure on the economy and assess if inflation continues to fall further.

Figure 4. Central banks around the globe continue to hike rates alongside the Fed and may look to pause in the first half of 2023 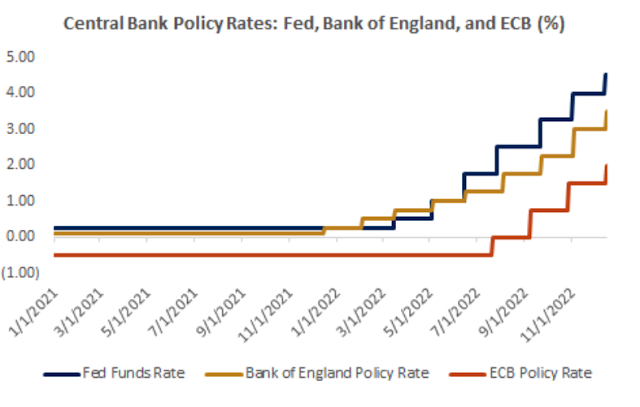 Retail sales for November come in weaker than expected: We believe the lag impact of Fed tightening may be starting to weaken consumption

U.S. retail sales for the month of November came in below expectations, falling -0.6% month-over-month, versus forecasts of down 0.15%. This figure also came in well below last month's 1.3% growth. The U.S. economy is nearly 70% driven by consumption, and slowing retail sales is perhaps the first signal that consumer demand may be stalling. The lag impact of aggressive rate hikes and ongoing inflationary pressures may now be putting more notable pressure on households and consumer confidence broadly. While one month does not constitute a trend, the slowing in retail sales is in line with our view that that the economy may fall into a mild recession in the first half of 2023. Nonetheless, we believe that the consumer started from a position of strength, given the tight labor market, higher wage gains, and elevated savings rates, which should provide some cushion in the months ahead.

Figure 5. U.S. retail sales came in below expectations in November, as consumer confidence softens as well 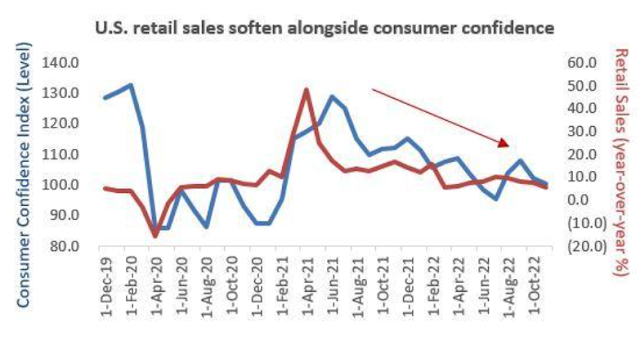 Markets will likely not ignore a pending recession, but some work to the downside has been done this year already

Overall, as we look to the first few months of 2023, there is a potential for softness not only in economic and earnings growth, but also in market performance. Given that equity markets had rallied nearly 10% in the fourth quarter already, markets remain more vulnerable heading into 2023.

Nonetheless, while we may give up some recent gains, in our view markets would not need to endure another meaningful leg lower from there, even if the economy enters a recessionary period. While markets would not ignore a pending recession, a lot of the work to the downside has been done in 2022, with the S&P 500 still down over 15% this year. In addition, if inflation continues to moderate and the global economy weakens, the Fed and global central banks have less incentive to maintain an overly restrictive monetary policy and may signal a start to moving back toward neutral by year-end 2023.

Thus, we would view any near-term volatility as an opportunity to position ahead of a potentially more sustainable recovery ahead. In terms of portfolio positioning, value and defensive parts of the market may continue to lead in the near term. But as the economy goes through a downturn, market leadership may shift toward parts of the market that tend to do well during recovery periods.

This includes areas like quality growth and cyclical sectors, and investment-grade bonds. Investors should consider using periods of market volatility to rebalance, diversify, and ultimately add quality investments at potentially better prices from both defensive and offensive parts of the market. 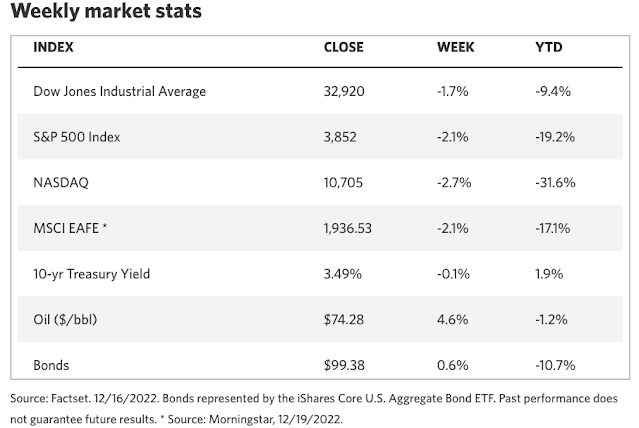 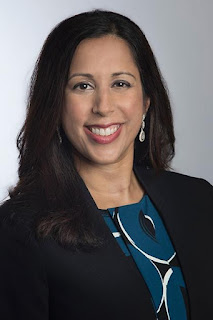 Mona Mahajan, left, is responsible for developing and communicating the firm's macroeconomic and financial market views. Her background includes equity and fixed income analysis, global investment strategy and portfolio management. She regularly appears on CNBC and Bloomberg TV, and in The Wall Street Journal and Barron’s. Mona has a master’s in business administration from Harvard Business School and bachelor's degrees in finance and computer science from the Wharton School and the School of Engineering at the University of Pennsylvania