Reprinted from “Bridging the Centuries: The Jewel on the Bay, a history commemorating the 60th anniversary of the County (formerly City) Administration Center.”

CELEBRATING THE 75TH ANNIVERSARY OF THE COUNTY ADMINISTRATION BUILDING

JEWEL BY THE BAY--On the day of the dedication, July 16, 1938 Roosevelt arrived by train to Los Angeles, then boarded a car at the head of a motorcade.

In preparation for the president’s arrival, many stores throughout the city closed their doors that afternoon. In addition, because military aircraft would be flying
in formation for the ceremony, all of Lindbergh Field’s commercial air traffic was halted from noon until after the ceremony. President Roosevelt arrived at the dedication site around 3 p.m. before an estimated crowd of 25,000 spectators.

The presidential car stopped on the dedication ramp, where the president was greeted with honors from the army and Marine guards and a 21-gun salute. He received greetings from dedication chairman Ralph Jenney and Mayor Percy Benbough. Mary Marston, granddaughter of George W. Marston, also presented him with a golden key to the building. Roosevelt gave a short speech in which he remarked about the engraved quote above the building’s western entrance: “I would like to say that I like especially the sentiment expressed on the face of [the portal], The noblest motive is the public good. I think if we all carry that motto in our hearts, in every city and community in the land, there is no question but the proper thing, American democracy, will survive.”

After the ceremony, President Roosevelt left aboard the U.S.S. Houston for his equatorial fishing cruise. Although the visit had been brief, Roosevelt’s dedication of the building was the figurative icing on the cake for many citizens of San Diego. They had not only received a stunning new Civic Center for governmental business that would serve as an aesthetic landmark, but had also been visited by the man who had worked so hard to stabilize the nation’s economy through public employment. It was the kind of gesture that a poverty stricken nation could look to with a mixture of appreciation and hope, and San Diegans showed this through the tremendous turnout at the dedication ceremony.

The Board of Supervisors thanked Sara Kendall, who while as an intern for the County researched and wrote much of the 60th anniversary program in 1998.
A complete view of the program is available at: 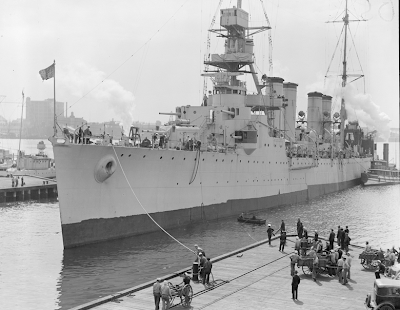 Less than three months after the attack on Pearl Harbor, the cruiser took part in the Battle of Sunda Strait near Java on February 28, 1942.  Under the command of Albert Rooks, the U.S.S. Houston fought valiantly before being sunk by Japanese torpedos.  Captain Rooks was awarded a posthumous Medal of Honor.   http://en.wikipedia.org/wiki/USS_Houston_(CA-30)