ARCHIVE / CAN NORTH PARK GET ANY BUSIER?

Todd Gloria sent out a press release on Tuesday announcing the SD City Council voted 7-0 to enter a partnership with DecoBike for self-service bike sharing system.
Look for the bikes to hit the streets in January 2014, says Todd Gloria.  North Park is part of the program.

For more on Deco Bike’s services and how to use the system go to www.decobike.com and a how to video: http://vimeo.com/41704628


RESTAURANT TIPSHEET— Week ago we hinted that Paul Basile, the amazing restaurant designer, who designed Underbelly Restaurant in Little Italy, might be undertaking the design of Underbelly 2, which is slated to open in the new North Parker loft/retail project at 30th and Upas.   Paul confirmed today to this blog that he is working on early designs for Underbelly 2, a Ramen style eatery that is set to open by the end of the year.
For more on Paul’s studio go to http://www.basilestudio.com/ or go view images of Basile designed restaurants at end of the blog.

NO NEWS NOW IS REALLY GOOD NEWS.
Regular readers of this blog know that restaurateur Jay Porter (The Linkery and Hub Cap Café] is moving to San Francisco and will close his two North Park restaurants.  We don’t know the details but we’ve learned through sources that The Linkery will announce a new ownership team in a few days.  We must respect a news embargo, but we can say this at this time that the San Diego craft beer community will be pleased over who and what will replace the Linkery (30th and North Park Way). 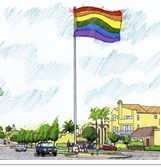 There’s always something cool in District 3 to take up a Saturday or Sunday or both.
The annual Pride Parade and Festival is Sat. July 13 for the PARADE (11 am Starts at University Ave. at Normal Street.  For the Festival the hours are Sat: noon to 10 pm and Sun. 11 am to 8 pm.  Festival site Balboa Park along Sixth Avenue.

ALTADENA’S ANNUAL GARAGE SALE.
NP Community Assn., just facebooked the date of Altadena’s annual garage sale, which will take place July 13 (this Saturday) from 8 am to noon.  More than 80 homes are participating in the really big garage sale.   The street boundaries of the Altadena neighborhood are Upas on the North; 32nd St. on the West, Redwood on the South and Boundary St. on the East.

Get there early and grab a latte at Santo’s Coffee house at 32nd and Thorn and later a delicious roast beef sandwich at R.I.P.E. Produce’s deli also at Thorn and 32nd St.