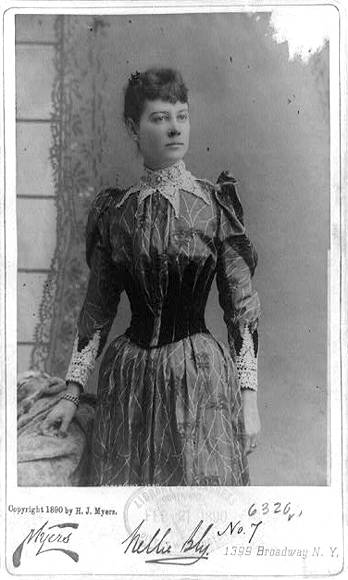 [Editor’s note: Two reports—more than a century apart—discuss New York Evening World reporter Nellie Bly [1864-1922].  Note the differences in reportage.  In 1889, the reporter charged with a page 1 story for the Evening World worked hard at getting himself into the story.  His breathless coverage of what Nellie Bly wore on the day she departed on her journey around the world in less than 80 days is far more detailed than today’s fashion magazines.  But that was 1889 and after all as he explains he “is only a man.”]

Nellie Bly Circled the Globe
By the Library of Congress

How long does it take to travel all the way around the world? Reporter Nellie Bly found out. On January 25, 1890, police cleared a path through a cheering crowd as Bly stepped off a train in New York just 72 days, 6 hours, 11 minutes, and 14 seconds after setting sail to prove she could circle the globe in less than 80 days.

In the then popular book Around the World in Eighty Days by Jules Verne its hero, Phileas T. Fogg, travels around the globe in precisely 80 days. Bly, born Elizabeth Cochrane, said she could do it in less time. Bly traveled by ship, train, jinrikisha (a seat on wheels pulled by a man), sampan (a small riverboat), horse, and donkey to make it. Her newspaper, the Joseph Pulitzer owned New York Evening World, carried daily articles about her journey and offered a trip to Europe to the person who could come closest to guessing her finish time. The Evening World, sponsors of Bly’s journey,  received nearly 1 million entries and sold more copies than ever before.

Miss Bly was no stranger to taking risks. Once, pretending to be insane, she had herself committed to an asylum in New York for ten days so she could expose the horrible conditions there. Her newspaper articles on the asylum, and later reports on slum life, inspired people to change these conditions. She also helped to pave the way for women in journalism. 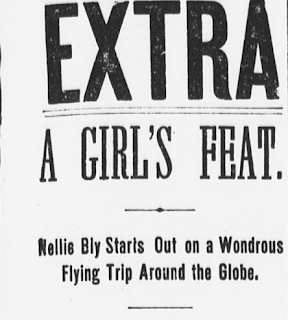 “I never wept in my life, but I came very near having a good cry when I bade my mother good-by,” said Miss Nellie Bly to an Evening World reporter, as she stood on the hurricane deck of the Hamburg steamship Victoria Augusta this morning.

Miss Bly sailed away from New York this morning, bound for—New York.
She will put a girdle ‘round the earth, and will see all climates and peoples ere she returns.

She will give thanks at Ismailia and spend Christmas in Hong Kong.

The new year will dawn upon her at Yokohama, in the land of the Mikado, and on Jan. 22 [1890] her great brown eyes will look again upon her native land and will enter Columbia’s domain by the Golden Gate.

A five days’ ride across this broad continent, and the spirited, plucky and adventurous little Bly will touch the soil of this metropolis, after a complete journey around the globe.

The Evening World reporter who bade Miss Bly good-by this morning is only a man, and as he surveyed the slight, willowy, girlish figure of the little circumnavigator clad in a close-fitting traveling gown of dark blue camel’s hair plaited with a soft golden stripe, with here and there a stray thread of red, and a dark blue waist with puffed sleeves, it fairly took his breath away.

He scanned the wide-eyed, girlish face, and found it full of smiles and with just the faintest business-like knitting of the smooth low brow.  The braid of black hair, doubled on the neck and tied with a bit of ribbon, and one of those absurd little tourists’ caps in fawn-colored check, with useless ear-laps tied over the crown, completed the picture.

“Can I be of any service to you, Miss Bly?” suggested the reporter, adding: “To get your luggage aboard or---?

“Oh, My ‘luggage’ is aboard, thank you.  I brought it on myself.  It is down in my stateroom now.

Miss Bly Makes Her Will.
“Oh, and that reminds me.  I want you to witness my will.  I don’t expect anything to happen: but then if something should happen, you know.”

The reporter, H.C. Jarrett and another gentleman followed the fair traveler down to the stateroom in solemn procession.

Somehow it seemed the thing to be solemn to these three men, either of them many years older than the girlish testatrix, and at least two of them old enough to be her father...

Miss Bly wrote her name in signature, and then the witnesses signed it, too.  The contents of this will were a secret, but the reporter saw the last word, which was the only one on the last line. 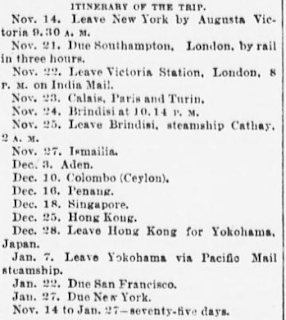 Editor’s note:  At the very end of the 1889 article excerpted above, the itinerary of Nellie Bly’s stunt is finally published, but not before we learned now old the men were who witnessed the signing of her will.  It’s much too easy to make continued fun of the Evening World’s coverage by clicking the address posted below:
http://chroniclingamerica.loc.gov/lccn/sn83030193/1889-11-14/ed-3/seq-1/