“Man, the title says it all.  An ultra-cool collection,” says Jim Jarmusch,  a film director who knows the other side. 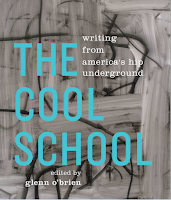 answers the question who were the forefathers of modern day hipsters.  And, why and how they emerged  into the lexicon of an era determined to place itself on the brink of doomsday.

Published by the **Library of America, “Cool School” is a no holds barred trip through the darker sides: the margins and subterranean tribes of mid-twentieth century America—the worlds of jazz, of disaffected postwar youth, of those alienated by racial and sexual exclusion, of outlaws and drug users creating their own dissident networks. Whether labeled as Bop or Beat or Punk, these outsider voices ignored or suppressed by the mainstream would merge in unpredictable and largely unorganized ways to force their way into American culture forever.

Were they outlaws or prophets?

The following is a random compilation of one liners from this remarkable compendium.

--Glenn O’Brien—“...If you’re hip your eyes are open, all three of them.  Hip is kind of being gnostic...Hipness is a pre-existing condition, something you discover in yourself by yourself...To be hip is to be an outsider who connects with other outsiders to become insiders of sort...”

--Neal Cassady: “...At the happy note of Les Young’s “jumping at Mesners” (which I’m hearing) I close this letter till later...”

--“Bob Dylan in 2004: “...If I needed to wake up real quick, I’d put on “Swing Low Sweet Cadillac” or “Umbrella Man” by Dizzy Gillespie, “Hot House” by Charlie Parker...There were a few souls around who heard and seen Parker play and it seemed like he had transmitted some secret essence of life to them.”

--Norman Mailer: “...No matter what its horrors the 20th century is a vastly exciting century for its tendency to reduce all of life to its ultimate alternatives...”

--Lenny Bruce:  “...I love it when he got arrested. He was a dope fiend—Bela Lugosi.  It was the worst advertisement for rehabilitation: he was dope fiend for seven years; he cleaned up and dropped dead...”

--Art Pepper on traveling with Stan Kenton’s band: “...Shelly Manne was playing drums; Conte Candoli was playing trumpet; Bud Shank was in the sax section; June Christy was singing; Laurindo Almeida was playing guitar; and I was featured with the band...”

ABOUT THE EDITOR:
Glenn O’Brien is the author of “Soapbox,” “Human Nature,” and “How to Be a Man.” A former editor at Interview, Rolling Stone, Spin and High Times, he frequently writes on contemporary art.

Note from Pillar to Post:
**Please support Library of America (LOA) a nonprofit publisher of classic American Literature Founded in 1979 with seed money from the National Endowment for the Humanities and the Ford Foundation, the LOA has published over 200 volumes by a wide range of authors from Mark Twain to Philip Roth, Nathaniel Hawthorne to Saul Bellow, including the selected writings of several U.S. presidents.