Editor’s note: This article first appeared in North Park News, June 2015. Reposted with permission.
By Thomas Shess with photography by the author, Scott Basile and Andy McRory
Those who purchased tickets to this year’s Old House Fair historic home tour had a double bonus in store when they entered the C Street home designed by San Diego icon architect Richard Requa (pronounced ray-kwah). The bonus being the opportunity to also wander amid the idyllic landscape, which was originally designed by Milton Sessions, the prominent landscaper of the early 20th century (Kate Sessions’ nephew).
Built in 1927 from Requa blueprints that came with the Tuscany-style three-level home, Rudd and Sally Schoeffel purchased the in-desperate-need-of-maintenance home in February 1998.  They have been restoring it ever since.  The couple (both very active as owners of South Park’s Rancho Buena Vista Real Estate), focused first on renewing the home then recently began paying attention to the expansive grounds.

During the current restoration, the Schoeffel’s met Parker Jackson, a noted locally-based historian, who specializes in the career of Richard Requa.  “Our meeting with Parker was by chance,” said Rudd, “when he learned we lived in a Requa designed home he told us he had not visited it before.  Of course, we invited him and he accepted.”

Later, after several visits, Jackson, who at the time was lecturing at an architecture class at San Diego State University brought the entire class and professor to visit Requa’s C Street project.  Rudd reports that Jackson told the class that their home was an example of Requa’s best work.

The C Street address is not the first home the Schoeffel’s have bought and restored to historical standards.  Their taste in restoration projects over the years has focused on Mediterrean-style, mainly Tuscan and Spanish Revival; plus an adobe pueblo and toss in a coupe of California ranch style projects.  But, they don’t just pick any home in need of TLC.  They appreciate the work of San Diego’s fabled architects having restored three homes by Cliff May, one by Lillian Rice and the current one by Requa.

But perhaps, the redux closest to their heart is the one without a pedigree architect.  It’s an ancient land grant adobe hacienda (built in 1845) that they restored in Vista, CA, where they raised their children. That renewal effort earned them a cover story in the Los Angeles Times Home magazine in 1984. They eventually sold the hacienda, the Rancho Buena Vista adobe, to the City of Vista, which in turn made it an historic pre-statehood era museum.

Old House Fair historic home tour docents were interested in showing Requa’s C Street home because it was simply “a magnificent Requa,” said Christine Winter, Old House Fair Historic Tour committee member. Another reason arguably was the first he designed after the architect’s 1926 tour of Mediterranean countries.  The Euro tour, sponsored by the Monolith Portland Cement Company, profoundly impacted Requa’s architectural style making it more simple than ornate, and his newly acquired vision launched him on his rise to prominence among San Diego architects, especially in the Italian and Spanish Revival genres.

Upon his return to San Diego, Requa designed in 1927 the C Street property for Leslie B. Mills, a civic-minded merchant, who served as president of San Diego’s Advertising Club, Downtown Rotary Club and the Chamber of Commerce.  Mills was president of Lemon Grove-based Southwest Onyx and Marble Company, which included a marble quarry in Baja California.  Mills’ firm shipped marble worldwide and is on record as a supplier to the Vatican.

Located at C and 32nd Streets, the 3,000 square-foot, three bedroom home was built on three lots on the eastern edge of Golden Hill, over looking, to the east Chollas Canyon area.

The landscaping, which cover nearly half an acre, was designed by Milton Sessions also in 1927.  His esteemed aunt was the legendary Kate Session, whose horticultural efforts earned her the title as Mother of Balboa Park.

"Many of the pathways and much of the east side of the gardens remain similar as when Milton Sessions installed them,” said Rudd, “the California pepper tree in the garden and the stately Canary Island palm are original.”  Adds, Christine Winter, “The sweeping patio overlooking a fruit orchard impressed us as well as the panorama of the hills toward East County.”

Also, Requa designed and had built a splendid fountain in the northeast corner of the main patio.  Fountain tiles were made by Pasadena’s world class handcrafted tile maker Earnest Batchelder [1875-1957] and recently painstakingly restored by the Schoeffel’s after children of previous owners had used it for target practice.

The home has three balconies and a rear galleria off the main patio that is accented with a beautiful climbing vine. 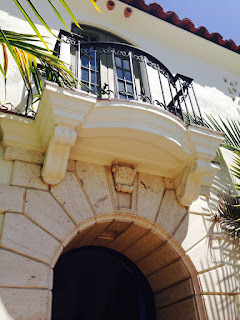 Surrounding the original front door is a marble trim from the owner’s quarry.  Marble was added to the kitchen counters and around the living room fireplace.  “The marble features are key features of the home,” says Old House Fair’s Winter.

A writer’s study to the left of the foyer is a vision in Arts & Crafts era wood crafting—all in Douglas Fir.  Tile leading down to the living room is original, however, the steps leading to the upper floor is magnesite, a slabbed Portland Cement product that was faux finished to make it appear as tiled steps.

The kitchen has not been extensively modernized outside of the modern appliances.  The counter, sink and faucet are original to Requa’s design.  And, to the surprise of a latter day plumber all the plumbing made of brass throughout, a rarity today.

Windows, which are either casement or double-hung were all created onsite, as were all the doors and cabinets, and, now restored, work as nicely as they did in 1927.

The other fireplace is upstairs in the master bedroom, both work beautifully, providing comfortable warmth during the one or two day long San Diego winter.

Homeowners are lucky to have the original set of Requa & Jackson, Architects blueprints for the house as well as a copy of the architect’s “specification manual” for the tradesmen constructing the home.

The following is an example of the work order for lumber: “Redwood is to be used on all woodwork on concrete.  All other construction timber to be merchantable Oregon pine that is (Douglas fir) sound, straight, free from large or loose knots or other defects impairing its strength or durability...”

The couple is expert in restoring rare architectural residences.  “there are no shortcuts,” says Sally.  “Just hard work and large amounts of patience, and, yes money.”

But, it’s all worth it.  She loves counseling new homeowners wishing to purchase and restore architectural jewels.  Her popular 40 + year old firm is now located in South Park and, in addition, Sally has recently affiliated with Pacific Sotheby’s as a broker associate, which gives her the ability to offer an international presence and exclusive marketing to her clients.

And, now for the million-dollar question: Is the Schoeffel’s Old House Fair tour home in South Park or Golden Hill?

Blueprints point out the residence and garage is built on Lots 109, 110, and 111 in the “Treasure Hill Addition” in San Diego, CA the northwest corner of 32nd and C Street.

Sally Schoeffel notes all original documentation for the home that is in her possession indicates their home is in Golden Hill, however Richard Requa in an article he penned for the San Diego Union in 1927 reported he was building “a dwelling...reminiscent of Old Italy for Leslie B. Mills in South Park, overlooking the Chollas Valley.”

So there it is.  The architect’s blueprints report Golden Hill but his published article in the San Diego Union says South Park.  He was no help at all to resolve the ongoing debate.

“That’s just something we have to live with,” Sally smiled.

SCHOEFFEL RESTORATION PROJECTS:
Rudd and Sally Schoeffel first began restoring historic properties in 1969 when they bought their first home, a Cliff May in La Jolla.  They later restored a second Cliff May, and Lillian Rice, both in La Jolla.  In Point Loma they purchased a third Cliff May.  “During our Cliff May period we became friends with Cliff as we invited him over to give us pointers on restoring the homes he designed.  We also traveled to his home in the Los Angeles area.

In 1973, the couple acquired Rancho Buena Vista, an adobe hacienda in Vista, CA that was granted to its first owner in 1845 by Pio Pico, then the Governor of Alta California.  At that time it was one of the last old land grant ranchos still in private ownership.

Seventeen years later, the Schoeffel’s sold the restored rancho to the City of Vista, which turned it into a museum.

Presently, the Schoeffel’s are restoring a Richard Requa home in Golden Hill.
_________


The author is a five time first place winner of San Diego Press Club’s Excellence in Journalism Award for Architecture and Design.  As editor and founder of North Park News, Tom Shess was also on the founding committee of the inaugural Old House Fair.