RETRO FILES / A BUNGALOW WORTH THE WAIT!

Editor’s note:  My wife Phyllis and I were over joyed to have our 1915 Craftsman bungalow in San Diego’s historic North Park neighborhood published in Arts & Crafts Homes magazine (Winter, 2015-16).
We recently had an open house to celebrate our home’s 100th birthday.
Here is another open house.  Reposted with permission.

In January of 1989, three years into our marriage and with a toddler son, we were looking to buy our first (and so far only) home when Phyllis came across an ad for a house in our price range.  “I have a good feeling about this one,” she said before we’d laid eyes on it.  The candidate was in North Park, an older urban neighborhood near downtown and next door to Balboa Park—San Diego’s version of Central Park.  How bad could it be? 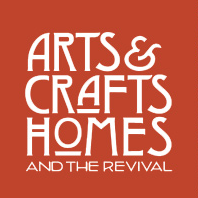 Well, we can laugh about it now.  Let’s just say—for Tom—it wasn’t love at first sight.  Phyllis, however, was elated: “I knew in my heart that we could turn this fixer upper into our dream home.” She liked the open floor plan of 2,000 square feet, the multi-pane windows with wavy glass.  A large family room had been added in the 1960s, as well as a swimming pool.

But all Tom could see was Pepto-Bismol pink everywhere.  The seller had decorated the 1915 Craftsman Bungalow with her beloved Victoriana, complete with pink walls, woodwork and wall-to-wall carpeting.  The family room had flocked wallpaper and a Roaring 20s motif complete with a lava rock fireplace flanked by red plastic sidelights, and a giant pool table.  The deferred maintenance in the kitchen was staggering and the house needed a new roof.
Of course, we bought it.

With our every nickel gone to the down payment, home improvements had to wait.  The delay afforded us time to research the Arts & Crafts genre.  After absorbing period-architecture magazines and attending several Craftsmen Weekends in Pasadena, we came away born again.  Though this modest house was one of dozens built to house professionals for the 1915-16 Panama-California Exposition in Balboa Park, we envisioned one day having our own mini Greene & Greene home.  For the record our builder James Blaine Draper built several other homes on our street at the end of 1915.
Our journey was worth every dime and every minute we spent.  It started with Tom scraping off at least seven layers of interior paint.  When it was down to bare Douglas fir, ghosting revealed where original elements had been (dining room buffet, dining room seating bench, parlor trundle bed, and shelf room dividers between living and dining rooms).  To our joy, we found pristine pocket doors covered up in a 1919 remuddling; now it was easy to turn the front parlor into a private guest room.

Our first hire was a one-man contractor who transformed the saloon motif in the family room to create a comfortable media center.  We closed off the sunken billiards den to create a master suite.  We re-stained the original Douglas fir trim and wainscoting in the front rooms.  As is typical, woodwork in the bedrooms, bath and family room is painted.
The same summer, an economic downturn found Tom with hundreds of hours to spare and a heat gun in hand.  Off came the exterior paint.  “I only fell off my jerry-rigged scaffolding twice,” Tom says.  Next we hired a landscape designer and soon had a south-side brick patio and fountain, an outdoor kitchen.  In our first “oh no!” moment, we realized we had to ground around the house from front or back to get to the new side garden.  All along we had focused on maintaining the original architecture.  Now we eyed the plate-glass window overlooking the new garden.  Old wavy glass or not, we decided to replace it with double French doors matching those in the house.  Good call: The set up looks original, and we use those doors every day. 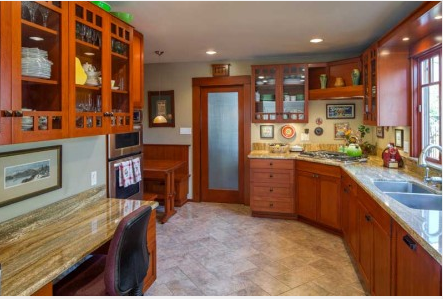 We put off the kitchen until we could afford to do it right.  Eventually we hired a bungalow-savvy contractor with the patience to put up with Phyllis’s detailed and determined oversight.  The contractor, himself an artist, designed and built the Mission-style table and storage benches.
Our crystal ball hadn’t revealed that North Park would become what Forbes magazine and the New York Times called “one of America’s hippest neighborhoods.”  We’d no idea we’d made such a good investment.  To us, this was simply the forever home.  Recently retired, we just celebrated our 30th wedding anniversary in our favorite place.  This little bungalow. 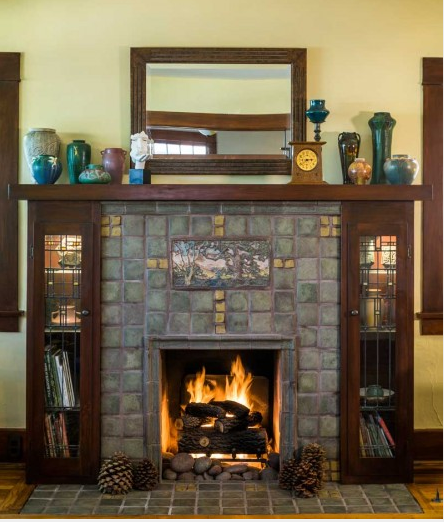 REVIVAL WORK IN AN ORIGINAL
The 1915 house contributes to the historic district, yet it’s not a museum.  The most notable addition is the new fireplace, which replaced over-painted brick that had weeds growing from it.  A few years earlier Phyllis Shess had invested in a large “Palomar Oak” art tile by Laird Plumleigh, “a charming and talented fellow from Encinitas.”  The thought occurred that it could be “displayed” as part of the new surround.  With the Plumleigh tile in hand and visions of Batchelder fireplaces, the couple looked for the right craftsman.  It didn’t take long to discover Jim Crawford of Authentic Fireplaces and his assembled team of masons, tile setters, and carpenters who used Old World techniques.  Jim loaned Phyllis a copy of his original Batchelder catalog to inform the design.  In a visit to Plumleigh’s “boneyard,” they found perfect green and gold field tiles to complement the art tile.  Phyllis laid the tiles out in the parlor, numbered each piece, and took a photo to guide the tile setters.  The flanking cabinet glass, inspired by Frank Lloyd Wright, is by Barry May.  The Douglas fir shelf and cabinets were stained to match the original woodwork. 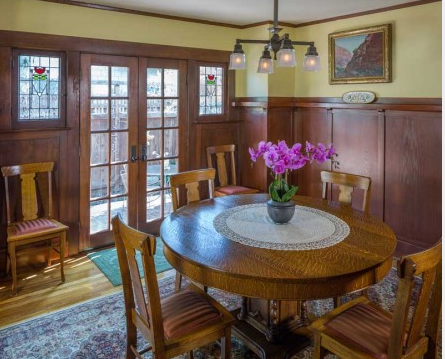 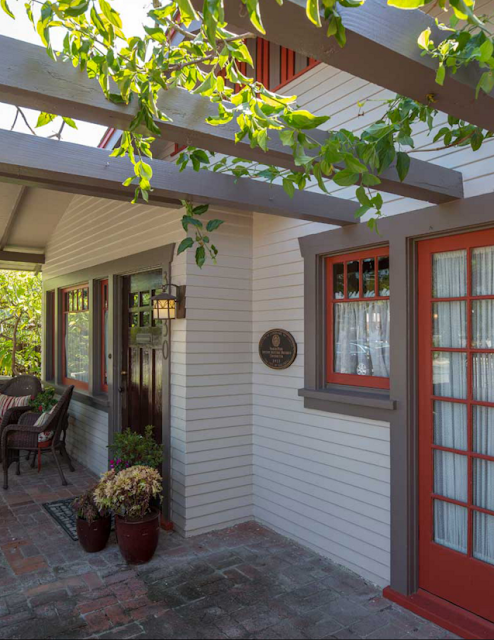