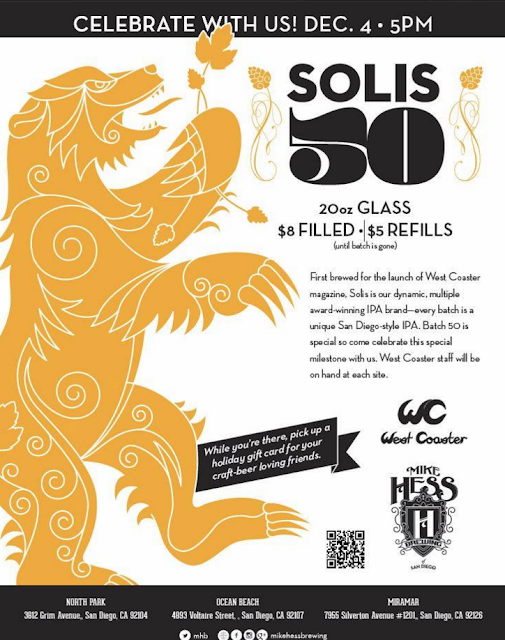 GUEST BLOG—By Mike Hess Brewing--Tonight (December 4th) is going to be fun in North Park. We're releasing Solis batch 50, a special edition brewed with Mike Shess & Ryan Lamb from West Coaster San Diego. It comes with its own 20 oz. keeper glass filled for $8 with $5 refills. Why is this so special? Keep reading...

In Fall of 2010, Mike and Ryan from West Coaster approached Mike Hess about making them an IPA for their launch party. Thus was born the original batch of Solis Occasus (which is "sunset" in latin; as close as we could get to West Coaster in Latin). We did 3 kegs for the first batch and brought our first ever distributed keg out of the Mike Hess Brewing Company - Miramar tasting room to The South Park Abbey for their launch party.

Subsequent beers brewed under the Solis brand name were just IPAs, without a clear charter, but it was around the mid-20s that we started numbering the batches and soon after we tightened up the style to be a San Diego style ‪#‎IPA.

For Batch 50, the boys (Mike and Ryan) came in and helped design the recipe and during beer week we had them in and brewed it. ‪#‎MikeHessBrewing ‪#‎craftbeer