COFFEE BEANS & BEINGS--(for today only) appears after the parade posting below: 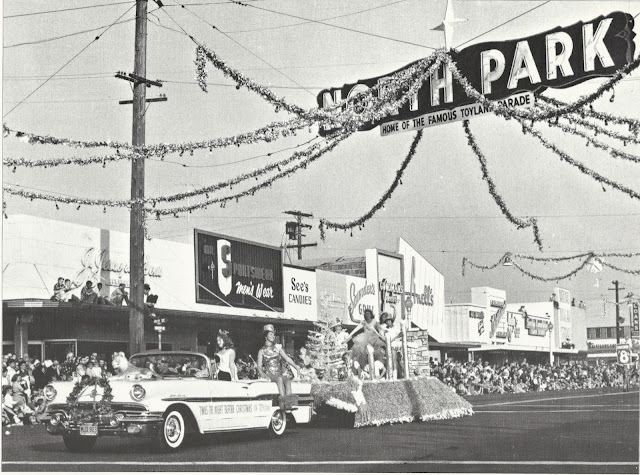 Neighborhood parades are almost a thing of the past.  That’s why the 52nd edition of the venerable North Park Toyland Parade is so special.  Like the Energizer bunny the community parade keeps chugging along.  This year’s version will be December 5, 2015 beginning at 11 am from University and Utah Sts. at its usual venue in historic North Park.

The black and white photograph (above) was taken in 1958 at University and 30th Street. Looking toward the northeast with the iconic Jessops Jewelry store in the background.  Riding on a float behind the North Park Lions Club Automobile is North Park Toyland Parade Queen Diane Marjorie Storton, a native of North Park and her court.

Parade History. The North Park Business Club began sponsoring the North Park Christmas Parade, as it was originally called, in the early 1930s.  The business clubbers decorated the streets with trees, wreaths and garlands and as the parade started, the holiday lights would be turned on.  Many of the street lamps that were decorated are still operating as of 2015.  Most of them are located west of 30th Street along University.  The Business Club installed the glass globe lamps in the late 1920s.

The parade was suspended during WWII but, after resuming in 1946, it evolved into one of the nation’s major parades.  For example, the San Diego Union reported the 1958 parade, which was themed “Children’s Christmas in Toyland” drew an estimated 250,000 viewers (including this reporter as a child), 4,500 participants, including the Long Beach Mounted Patrol, 36 floats, 22 bands, 50 clowns and 200 San Diego Zoo camels.

During the 70s and into the mid-1980s, North Park went into a slump.  Businesses abandoned the neighborhood.  Jessops Jewelers and other retailers moved to the fashionable new malls in Mission Valley.   As the area decayed, the parade was one of the victims of the downturn.  The North Park Parade died and no one seemingly cared for years.

In a desperate attempt to bring business back to North Park during the 70s then District 3 Councilmember had the city remove parking meters from North Park.
Many areas of the community are still free of parking meters thanks to politician and carpet salesman Allen Hitch.

It wasn’t until a new generation of homeowners and business leaders emerged in the late 1980s that North Park began to slowly recover.  In 1993, the community newspaper North Park News was founded.  Its publishers vowed only to publish good news.  But it wasn’t the news that helped the newspaper lead the community out of a depression it was the real estate ads that ran throughout the monthly paper.

Local realtors could afford full page advertisements in North Park News and those ads were filled with pictures of single family homes that many were selling for under $100,000.

As the newspaper continued to publish, a remarkable thing happened.  Home sales in North Park went from bleak to frenzied.  Those historic bungalows were being snapped up by young professional couples who could afford the price and they discovered North Park was only five minutes from downtown.  Why commute from an apartment or condo in the suburbs when you could own an entire unattached single family home in North Park.

As home sales rose so did North Park’s retail community.  Much of the heavy lifting to attract new businesses to the area fell on the square shoulders of the national Main Street Revitalization project.  Main Street as it was called focused on small town revitalization.  But in the mid-1990s, Main Street decided to launch its first urban program.  It succeeded as today, North Park is called America’s Hippest Neighborhood.

With the revitalization, the North Park Toyland Parade was reborn in the early 1990s and it continues to be held each first Saturday in December thanks to a whole new generation of enthusiastic backers.  The end.

COFFEE BEANS & BEINGS
Before or after may we suggest visiting one of Greater North Park’s excellent coffee houses.

SOUTH PARK GETS INTO THE SPIRIT 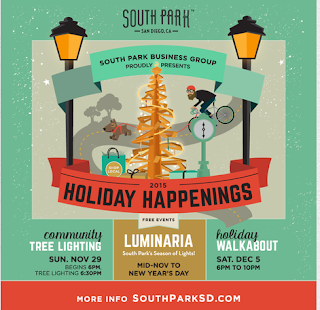