GUEST BLOG / By Gordon Rayner, Political Editor, The Telegraph--When Nancy Astor, Britain's first female MP, told Sir Winston Churchill that: "If I were your wife I would put poison in your coffee," Churchill famously replied: "Nancy, if I were your husband I would drink it."

Sadly, witty as it appears Churchill did not say it, according to Boris Johnson, who writes in a new book on the wartime leader that it is one of many one-liners wrongly attributed to the great man.

The put-down first appeared in a joke of the day column in the Chicago Tribune in 1900, almost 40 years before Churchill's supposed exchange with Mrs. Astor.

Mr. Johnson says in his new book, The Churchill Factor: "Did the young Churchill somehow spot it on his trip to America [in 1900] and squirrel it away for...’” 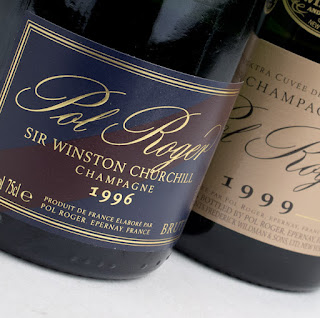 Added Libations.
Churchill’s first choice for a beverage may not have been coffee, but Champagne, especially Pol Roger was high on his list.  In fact, he was a lifelong aficionado of Pol Roger and a dear friend of Odette Pol-Roger, whom Churchill met in the 1940s.

Churchill is quoted as saying:
“Remember, gentlemen, it’s not just France we are fighting for, it’s Champagne!”

More on Pol Roger:
Champagne house Pol Roger is one of the more prominent producers located in the Epernay appellation. The estate is known for its balanced house style made of equal parts of all allotted Champagne grapes: Chardonnay, Pinot Noir, and Pinot Meunier, as well as its close tie to British politician Sir Winston Churchill. Although the house was officially established in 1849, it wasn’t for another decade that the winery turned its focus to exporting.

Pol Roger is also known for being the first house to produce a drier style of Champagne more in line with British tastes, and today produces nearly 2 million bottles per year. Half of their grapes are grown on their 220 acres of estate vineyards while the rest are purchased from contracted growers with whom the company has been working with for decades. The portfolio consists of a non-vintage brut, a vintage brut, a demi-sec, a brut nature, a rosé, and a blanc de blancs.

In 1975, Pol Roger established the Sir Winston Churchill cuvee which is only released during the best vintages as a way to pay homage to the great man who was close friends with Odette Pol Roger. The estate honors excellence in all that they do, and in turn, release wines with skill and elegance.