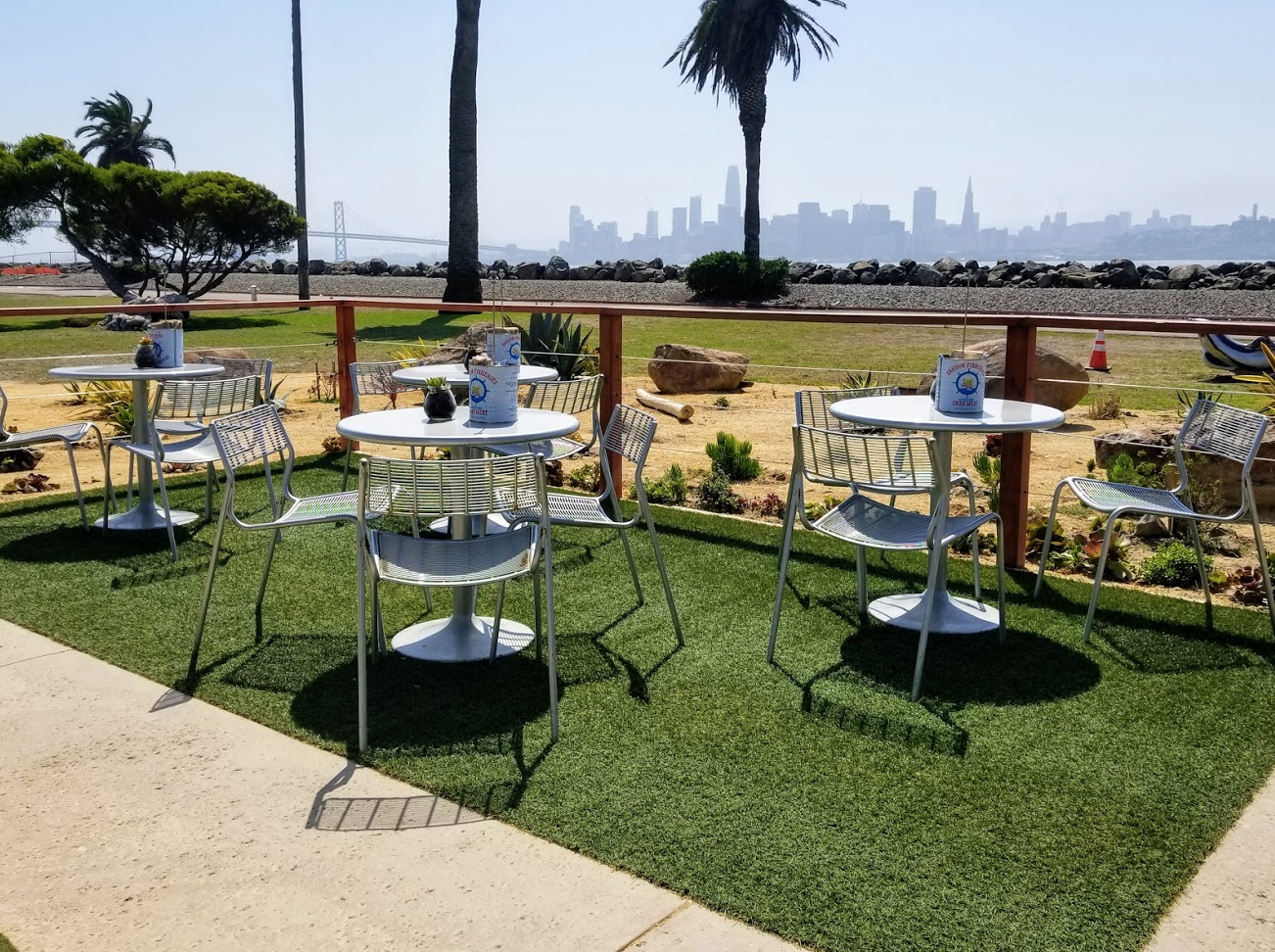 By Thomas Shess, PillartoPost.org Editor with images by Phyllis Shess unless indicated otherwise.

Location, location, location is the mantra of real estate agents and creative restaurateurs.  Regarding the latter, this blog’s most recent exploration discovered a quality, comfort food restaurant hiding in plain sight for more than a year in the middle of San Francisco Bay.

The side-by-side landforms are easily recognized being the center point of the iconic gray San Francisco/Oakland Bay Bridge.

Albeit, Treasure Island today looks every bit the abandoned U.S. Navy supply depot it is, Mersea makes up for the acres upon acres of rubble and eroded government issue buildings forgotten by time.

Situated on the west side of Treasure Island, the Mersea complex offers magnificent views of the San Francisco skyline and close-ups of the new and old sections of the Bay Bridge. 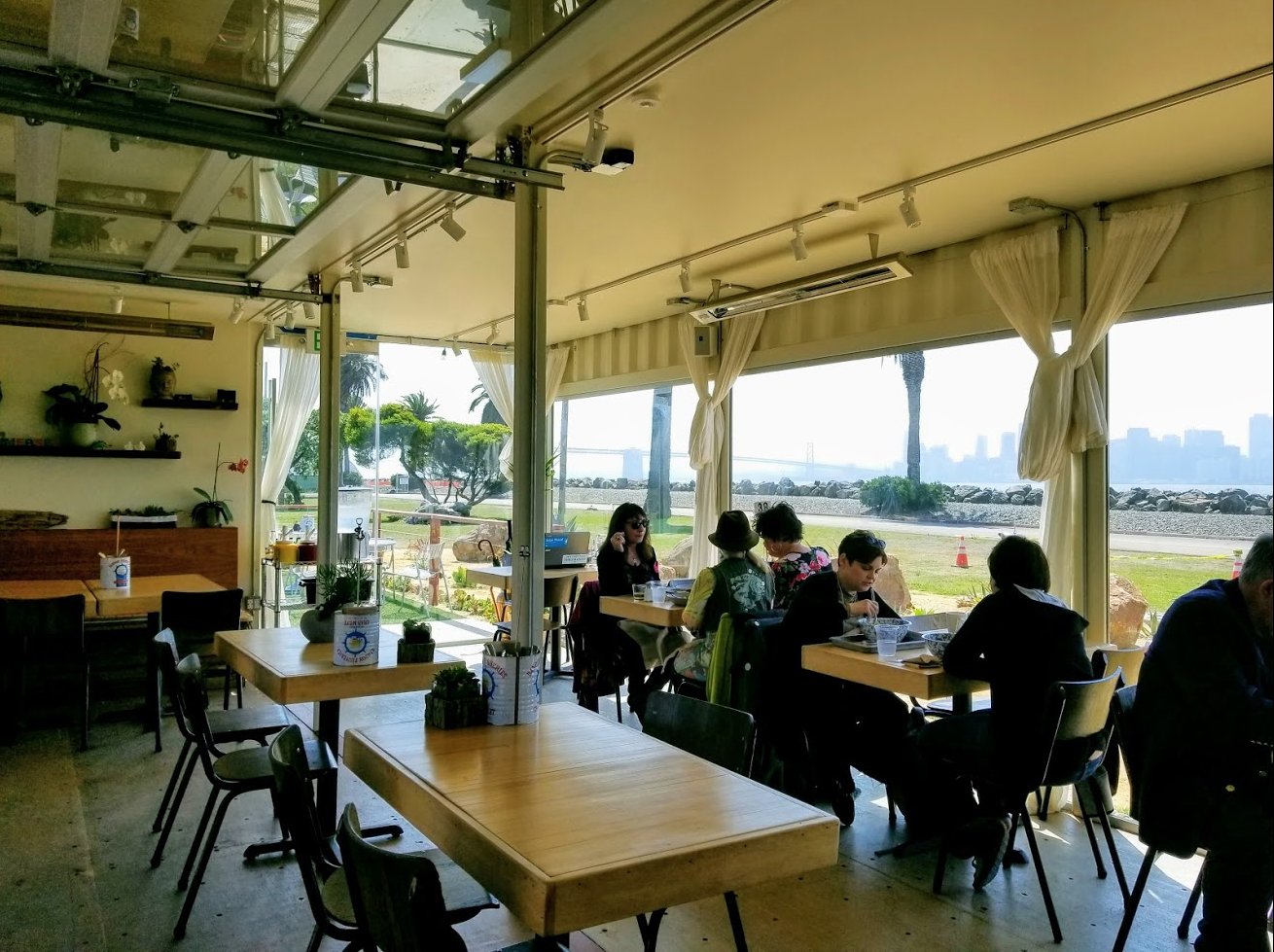 With a nod to the current metallic design rage of Bay Area dining structures, Mersea’s management has created its own genre: container chic.  The premises are dotted with 13 steel shipping containers purchased on the island to fashion kitchen, dining rooms, supply closets, and restrooms into a spacious restaurant compound.  Amazing what clever design, a welder’s torch or two; inserted picture glass view windows and contemporary paint hues can do to hardened steel containers. 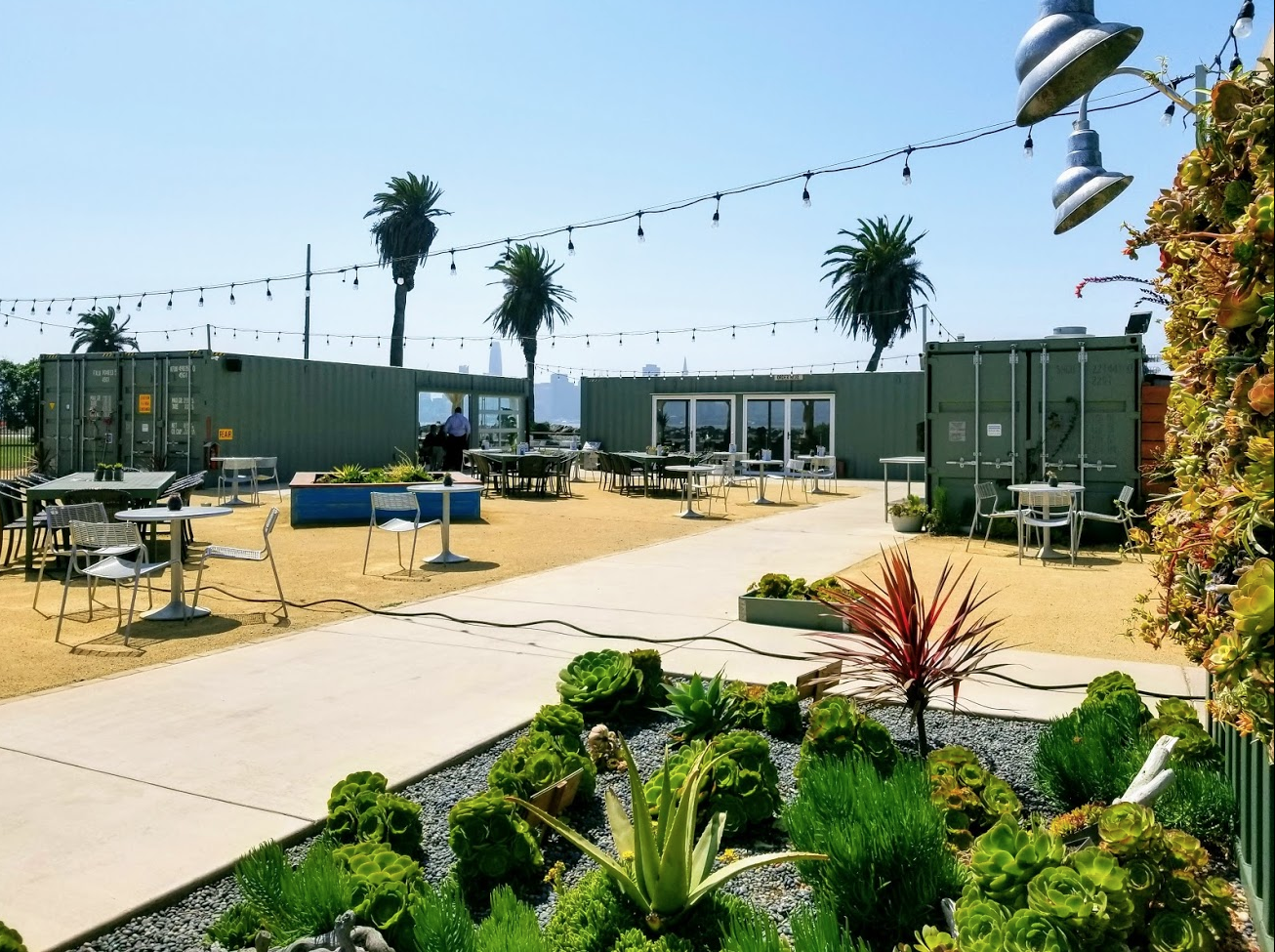 Add modern strings of lighting cover the central outdoor seating give Mersea a cozy atmosphere for evening dining. Also, in the square-block venture are small gardens ranging from herbs to succulents and a putting green and two bocce courts.
Utilitarian creativity is outpaced by the chef’s flair for imaginative menu items and you’ll now be pleasantly surprised at how delicious the cuisine is prepared in this former U.S. Navy expedition kitchen.

Containerized kitchens like used by Mersea are surplus commodities that were once used to feed our troops in far-ranging battle zones.

Judging the long-term merit of the cuisine is impossible with only tasting two memorable dishes: fish and chips and the ribs, however, Michael Bauer, the ace dining writer with the San Francisco Chronicle detailed many of the dishes served at Mersea in his article last March.  Click here.

The only way to reach the 576-acre Treasure Island, once the site of the 1939 Golden Gate International Exposition, is by car or bus then navigate the tricky Treasure Island exits via the I-80 Bay Bridge.

Our visit to Treasure Island was midday, midweek when traffic was lighter on the bridge.  Traffic that can be horrendous during commute hours.  Mersea is open daily 9am to 9 pm.

Wilson Walker of KPIX Channel 5 News recently reported on the development history of the former US Naval Station. “...Treasure Island is no longer the quiet island in the middle of the bay. It is now sitting squarely between new and old. Planned development will add 800 housing units to the island and the entire project is expected to take another 20 years.
Treasure Island director Bob Beck said, “So as you come to the island you’ll be going through a construction zone to reach the older portion of the island.”
If you haven’t been out here in a while, it might be worth a little day trip because you will find yourself in a pretty bizarre landscape, a place that is at once both the past and the future.
Beck said, “It’s got a lot of history, we’re trying to bridge that to the future.”
Beck is overseeing this first major phase of construction.
“Of the land the city is receiving from the Navy, only five buildings transfer to the future,” Beck said.
But this isn’t just a piece of land in transition. At least a third of the people that live here are also in transition, living in supportive or low-income housing.
Treasure Island resident Tyrese said, “I was in the lottery for housing for about 11 years, I’ve been very, very fortunate and thankful.”
And while the redevelopment won’t reach this end of the island for several years, everyone knows it’s coming.
Tyrese said, “Whenever you see million-dollar cranes going up you know there’s a lot of development about to start.”
Beck said, “All of our existing affordable housing residents have an option to transition to new affordable units.”
So 20 years after the Navy handed this land to the city, San Francisco is about to grow eastward.
“Oh, it’s going to look nothing like this in 15 years,” said Beck.”

But for now Treasure Island’s Mersea restaurant is a great way station to explore what’s happening today and going to happen on the island.  Plus, for most of us it’s still an unexpected surprise.  And, who among us doesn’t like to brag over discovering an out of the way gem of an eatery that has a great story as a side dish. 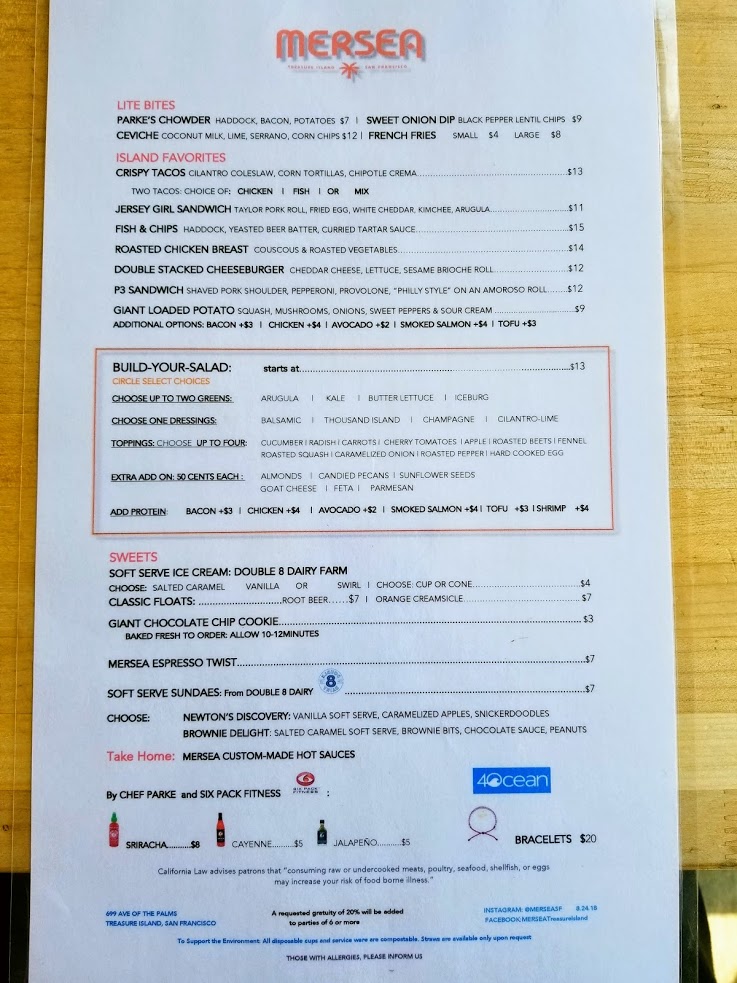 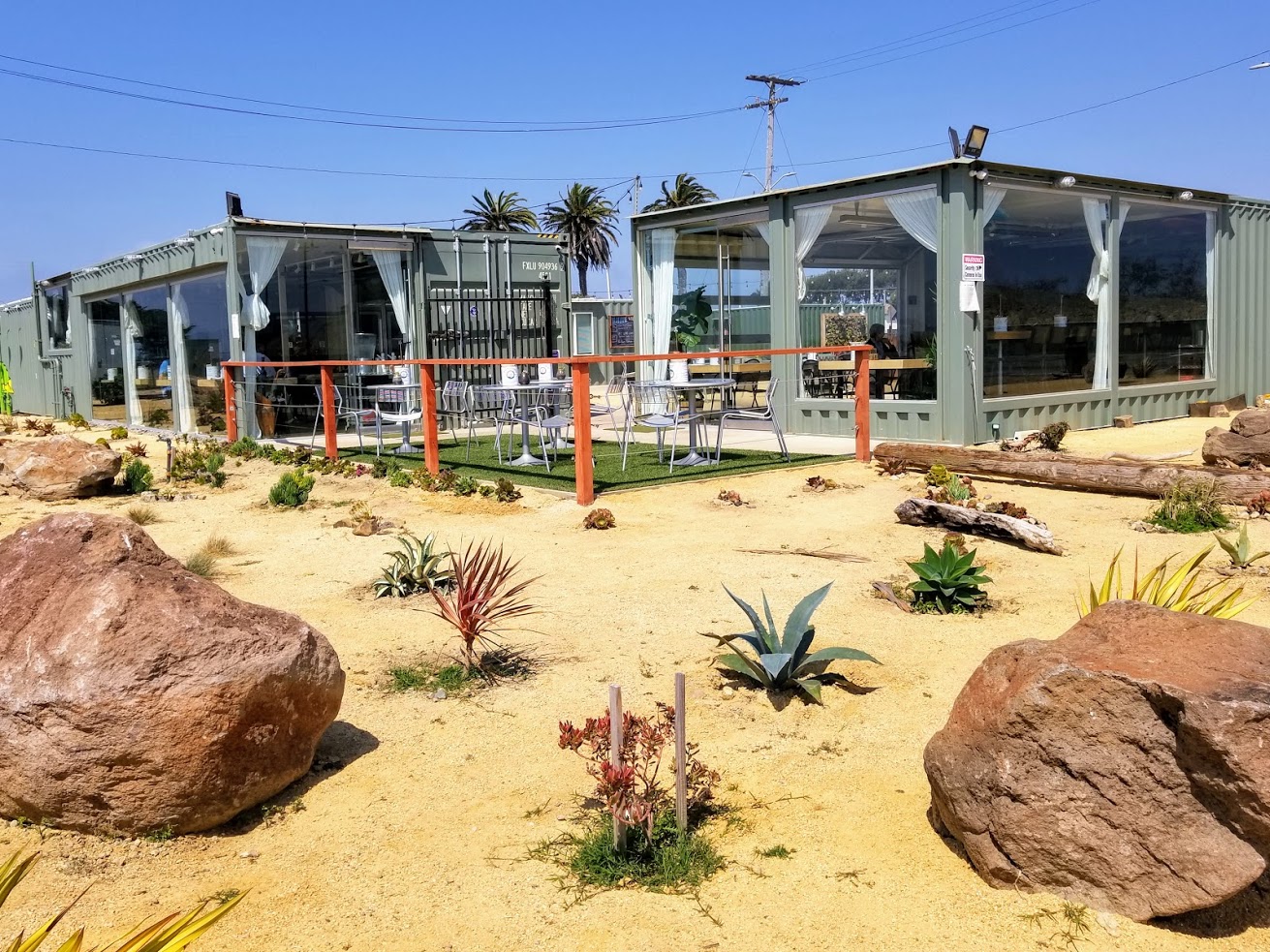 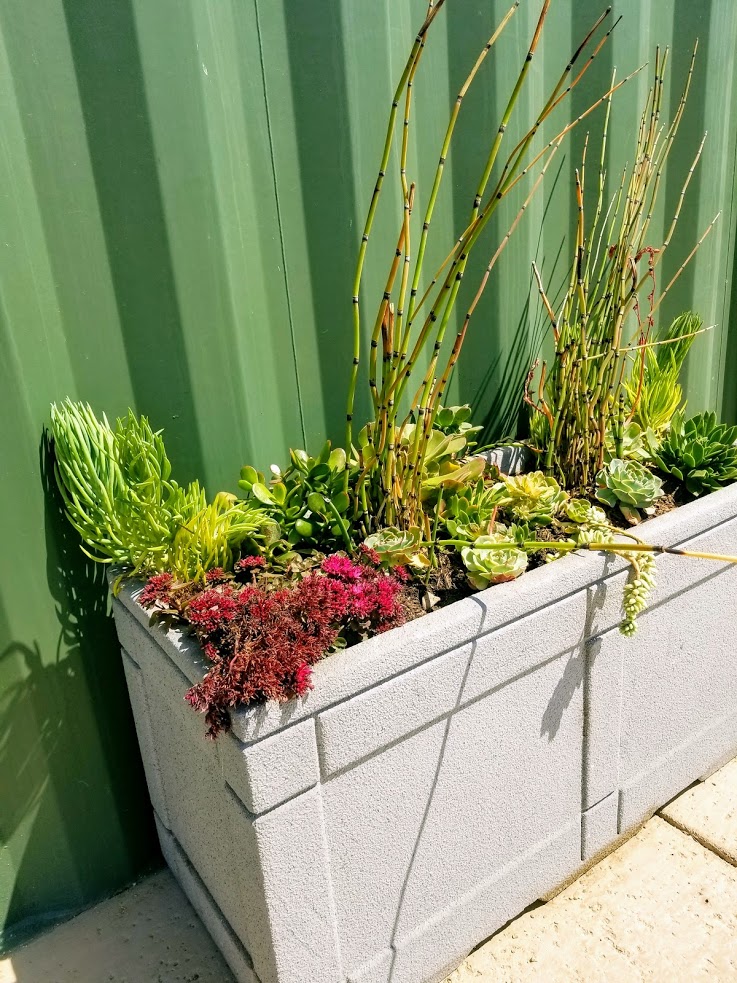 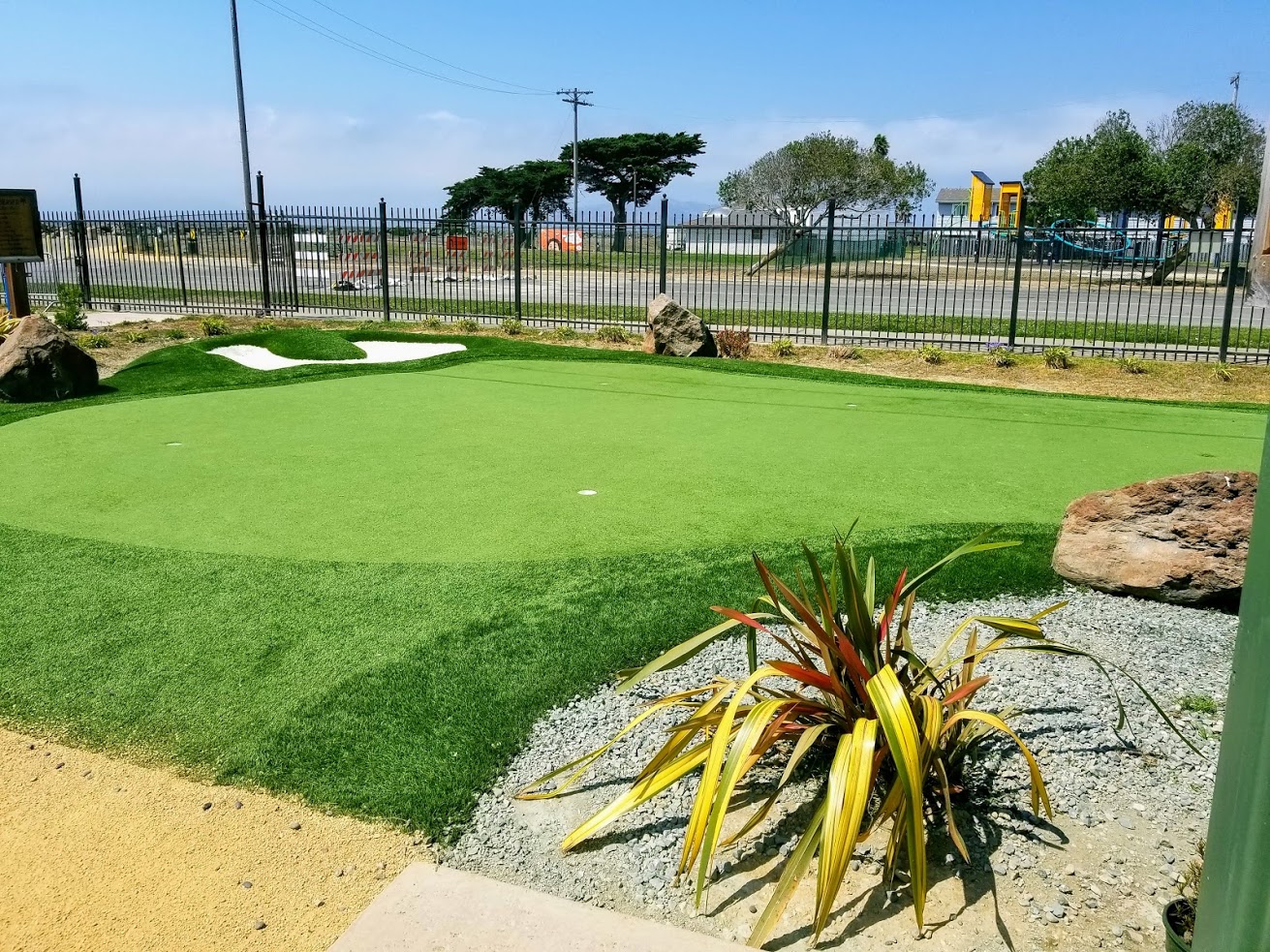 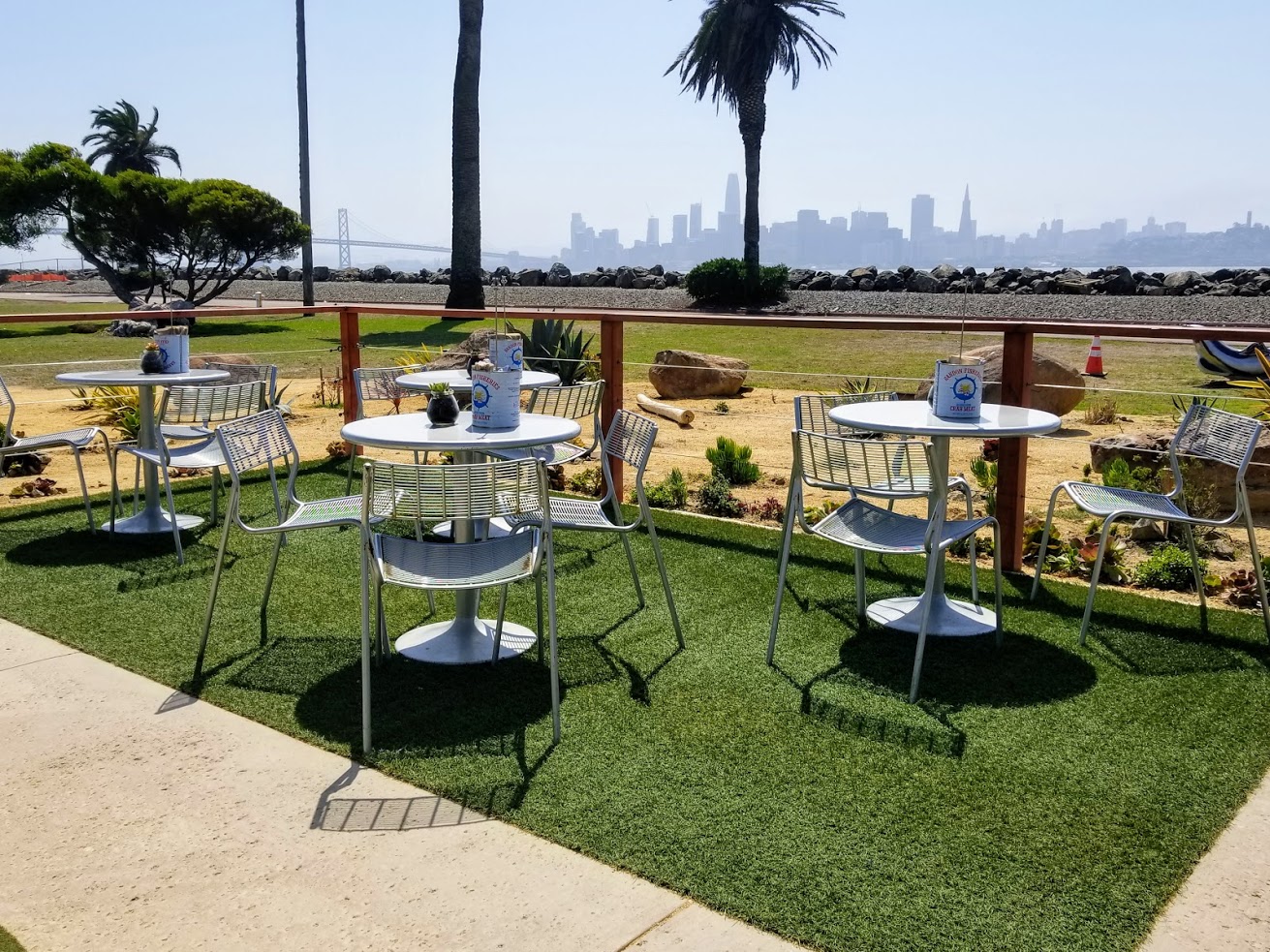