GUEST BLOG / By Tom Murray, Business Insider--The world's largest aircraft has revealed its interiors — and they're looking luxurious. Airlander 10 is a 300-foot hybrid airship that plans to take travelers on three-day excursions. The airship features en-suite bedrooms, a bar, and a lounge area. There's also glass flooring so people can take in the views from 16,000 feet.

Nicknamed "The Flying Bum" because of its posterior-shaped hull, Airlander 10 is part-plane, part-airship, part-helicopter, built by Hybrid Air Vehicles (HAV). The £25 million ($33 million) aircraft is 302 feet long, making it about 60 feet longer than the world's largest passenger plane, the Airbus A380, which spans nearly 240 feet.

HAV plans to take up to 19 passengers on three-day excursions on the Airlander 10, and it looks like they're in for a treat on board. 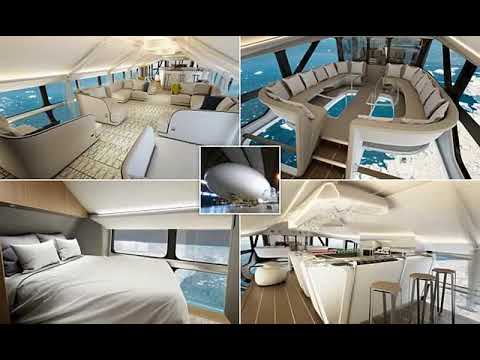 The interiors were developed in collaboration with Design Q, a UK-based design consultancy.

Though it may be bigger than the A380, it's certainly not as fast — the Airlander's top speed is just 91 mph compared to the A380's cruising speed of 560 mph.

The Airlander is not about getting to places quickly, though. The luxury aircraft is instead designed to revive the joy of flight as an experience rather than a means of transport.

However, it's not always been plain sailing for the world's largest aircraft.

In 2016, the giant airship crashed into a telegraph pole and nosedived on its second test flight.

The giant airship has now completed six successful test flights, but it will need to complete a total of 200 incident-free hours in the sky before it is allowed to take on commercial passengers.