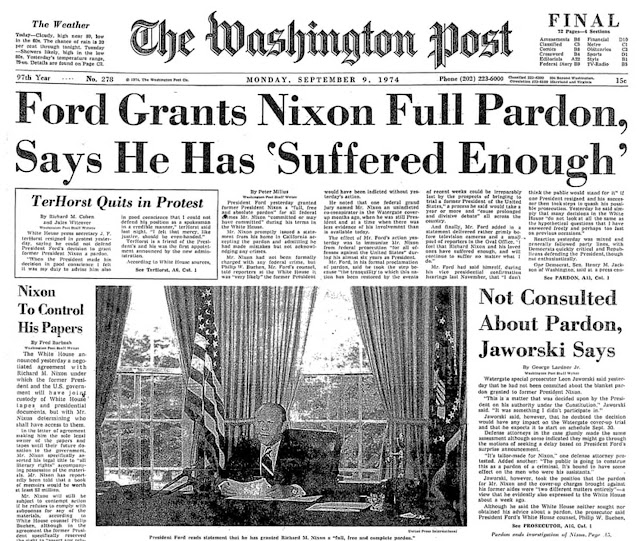 Editor’s note: Next Sunday, September 8, is the 44th anniversary of ex-president Richard Nixon receiving a pardon from sitting president Gerald R. Ford. The following is the text of that pardon.

By the President of the United States of America
A Proclamation**

Richard Nixon became the thirty-seventh President of the United States on January 20, 1969 and was reelected in 1972 for a second term by the electors of forty-nine of the fifty states. His term in office continued until his resignation on August 9, 1974.

Pursuant to resolutions of the House of Representatives, its Committee on the Judiciary conducted an inquiry and investigation on the impeachment of the President extending over more than eight months. The hearings of the Committee and its deliberations, which received wide national publicity over television, radio, and in printed media, resulted in votes adverse to Richard Nixon on recommended Articles of Impeachment.

As a result of certain acts or omissions occurring before his resignation from the Office of President, Richard Nixon has become liable to possible indictment and trial for offenses against the United States. Whether or not he shall be so prosecuted depends on findings of the appropriate grand jury and on the discretion of the authorized prosecutor. Should an indictment ensue, the accused shall then be entitled to a fair trial by an impartial jury, as guaranteed to every individual by the Constitution.

It is believed that a trial of Richard Nixon, if it became necessary, could not fairly begin until a year or more has elapsed. In the meantime, the tranquility to which this nation has been restored by the events of recent weeks could be irreparably lost by the prospects of bringing to trial a former President of the United States. The prospects of such trial will cause prolonged and divisive debate over the propriety of exposing to further punishment and degradation a man who has already paid the unprecedented penalty of relinquishing the highest elective office of the United States.

Now, Therefore, I, Gerald R. Ford, President of the United States, pursuant to the pardon power conferred upon me by Article II, Section 2, of the Constitution, have granted and by these presents do grant a full, free, and absolute pardon unto Richard Nixon for all offenses against the United States which he, Richard Nixon, has committed or may have committed or taken part in during the period from January 20, 1969 through August 9, 1974.

In Witness Whereof, I have hereunto set my hand this eighth day of September, in the year of our Lord nineteen hundred and seventy-four, and of the Independence of the United States of America the one hundred and ninety-ninth.

38th President of the United States