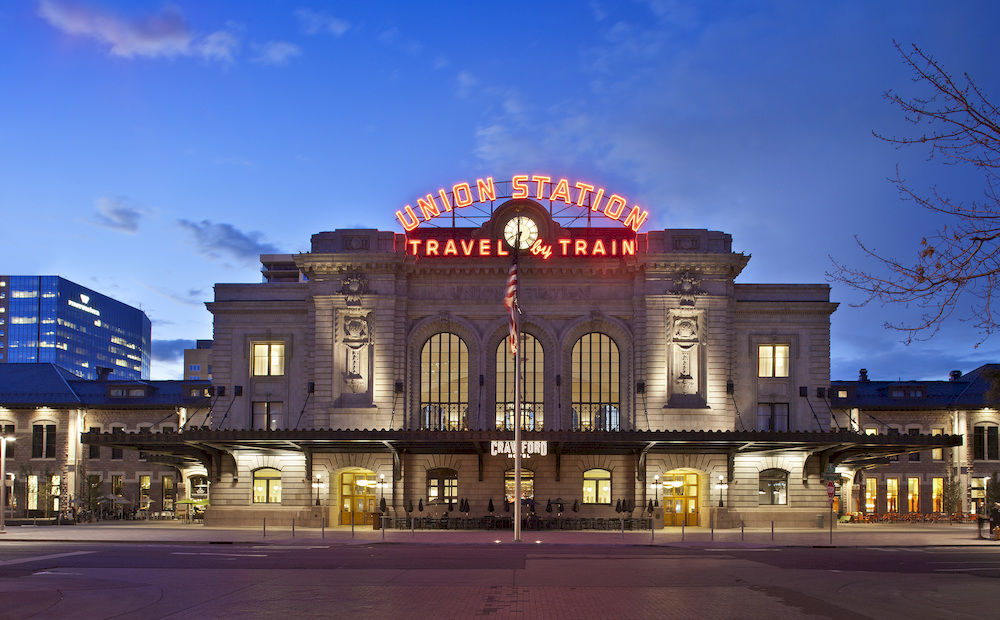 By Eric Peterson, PillartoPost.org Dining Critic & Train aficionado--Teresa and I recently began a trip in Denver. Our brief time there galvanized why we love train travel.  And we fell in love with Denver’s revitalized Union Station and its movable feasting.

But for success in every measure—architectural acclaim, commercial viability, cultural triumph—Denver Union Station stands alone. It is the only big-city train station in which I will gladly spend the night.
Credit a redevelopment effort that began in 2001.

A landmark public/private partnership coalesced behind an inspired master plan. I’ll spare the reader the entire list of acronyms for the partner agencies that were involved (CCD, CDOT, DRCOG, FTA, USNC, DUSPA, to name a few), but the mixed-use plan, still taking shape, includes office, hotel, residential, and retail space.

The development boasts a long list of environmental features: a minimized footprint, the use of natural light and renewable energy sources, LEED certification, low-flow toilets (in a train station!), a pedestrian-friendly, multi-modal transit hub, including an underground bus station, and an innovative stormwater management system.

If I were young, I’d be sorely tempted to move to Denver. One garrulous and friendly transit supervisor told me they can’t hire enough train operators to fill all the vacant positions.

Teresa and I flew into Denver, took a taxi to the historic Lower Downtown district, known as LoDo, and checked into the five-star Crawford Hotel, located in the upper floors of Denver Union Station.
Our fourth-floor suite, in what was formerly the train station’s attic, still had the original red brick walls. The vaulted ceilings, glass chandeliers, and massive rough-hewn beams brought to mind the rustic, historic riches of the Rocky Mountain gold rush. The suite featured a separate sitting area and the sort of airy, glass-and-marble bath that you’d expect to find in a Four Seasons Hotel. Its neighbors include Coors Field, the home of the Colorado Rockies, the mile-long 16th Street Mall, a Whole Foods Market, and the historic Oxford Hotel. The buildings in this downtown district are mostly red brick. The streets are impressively clean.


For its registered guests, the Crawford Hotel offers drop-off and pick-up service anywhere around LoDo in their courtesy car, a Tesla, but Teresa and I opted to explore the neighborhood on foot. We began with a walk around Union Station. The first thing we noticed: security was reassuringly tight. Knots of Homeland Security agents, all dressed in black and heavily armed, stood vigil at the train station doors. Transit security officers, also armed, scurried to meet arriving trains. Amtrak police were there in force, too. Panhandlers were few and far between.

The seating in the main terminal (see above) is sophisticated, warm, elegant, and plentiful. Soaring arched windows infuse the space with natural light. The walls are painted white. The chandeliers are golden. The terrazzo floor is pristine. The air is filled with the fresh scents of roses, coffee, and baking croissants—no trace of that musty old smell that you find in most train stations. Electric outlets are conveniently located in all the seating areas.

To my surprise, inside the terminal, we came across a small but well-stocked bookstore. The Tattered Cover Bookstore (below) is the satellite operation of a much larger bookstore bearing the same name, located nearby on 16th Street. This Tattered Cover even had a “Trains” section among its bookshelves. The only black mark: They didn’t stock my book, “The Dining Car,” but the delightful, Pulitzer Prize winning novel I picked up there, “Less,” by Andrew Sean Greer, was so funny and so well written that I forgave them their lapse. 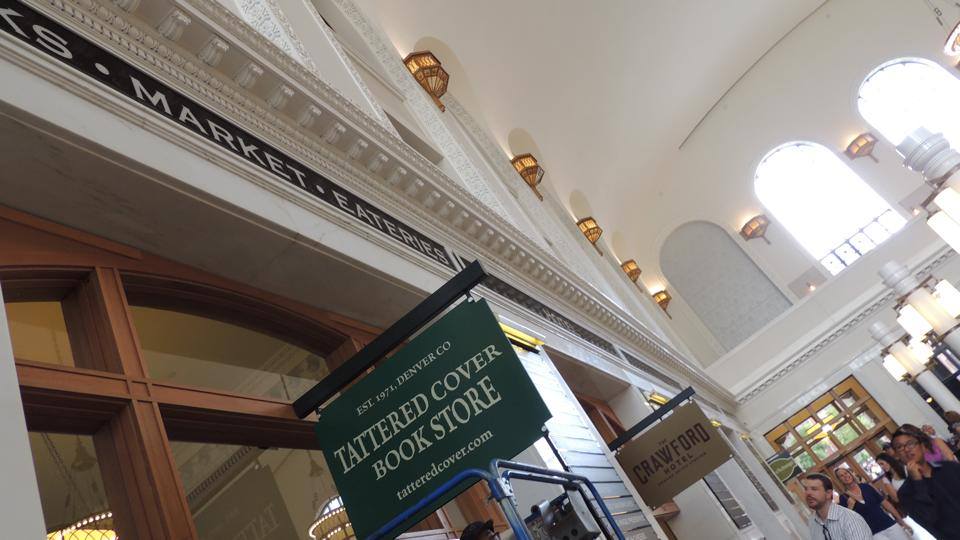 For this time in Denver, my brother, Chris, served as our tour guide and travel concierge. He led us to a late lunch at Hearth & Dram, a self-described “whiskey-centric” modern saloon and brick-rustic American restaurant a few blocks from Union Station.

“A dram,” Chris explained, “usually refers to a taste of whiskey. It’s more than a splash, less than a jigger.” The bartenders at Hearth & Dram use a rolling librarian’s ladder to retrieve more than 300 whiskeys on display from around the world.

Listed on the craft cocktail menu is one $350 cocktail. Its base ingredient is a healthy shot of Yamazaki 18-year-old Japanese single malt whiskey, considered by experts to be one of the top scotches in the world, but the hillbilly in me shrugged it off. I was too busy staring at a line of labels high on the wall behind the bar but within easy reach of the bartender’s ladder: several bottles of Sazarac Company’s flagship brand of nearly-impossible-to-find bourbon, Pappy Van Winkle.

We passed on the pricy bourbon and spent our money on lunch: Cobb salads, a smoked pastrami Reuben, iced tea, fries. Chris insisted we add the award-wining H&D Burger to our order. What makes the burger special is its husky smack of umami—think the flavor of veal stock—that is neither sweet nor sour, neither salty nor bitter.

We suspect the Hearth & Dram’s chefs achieve this pinnacle realization of taste—some call it “yummy”—using sautéed mushrooms. The H&D Burger comes with thick-cut bacon and a smoky cheddar cheese. To underscore the sandwich’s mettle, our pleasant female server planted a heavy silver trophy at the center of our table, proof that this burger recently finished first in the highly competitive Denver Burger Battle.


As evening fell, Teresa and I were back in our comfortable room in the Crawford, dressing for dinner. We made it downstairs in time to watch Amtrak’s eastbound California Zephyr depart for Chicago. Is there anything more exciting than watching a gleaming silver double-decked passenger train leave a station? The tracks of Union Station are partially covered by enormous white canopies that float sail-like above the train platform, and at night space is well-lit. It’s the setting for a celebration of renewal: clean, modern, and happy.

Having successfully seen the Zephyr off, our party moved inside Union Station to the Cooper Lounge, which is situated like a well-kept secret above the din of the rabble, on the train station’s mezzanine level. The Cooper Lounge is a spectacularly glamorous bar with bright light, tasteful furnishings, and a chichi clientele. Drinks are presented on silver trays. We eschewed the fussy craft cocktails of the menu for classic Tanqueray gin martinis—extra dry, of course. The steak tartare and lollipops of Colorado lamb were astonishing.


We then stumbled our way into Stoic & Genuine, one of Union Station’s ground-floor restaurants featuring an open kitchen and a raw oyster bar. The bartender was attentive. The champagne flowed. Stoic & Genuine is an upscale seafood restaurant. We had a dozen oysters—a sampling of East and West Coast oysters—before signing the check and moving on to dinner at the swank, nearby Italian restaurant Tavernetta.
Grass-fed beef carpaccio, lamb gnocchi, and Maine lobster; roasted quail, grilled lamb, and rare-cooked slices of a New York strip, summer vegetables and one too many Manhattans—and too much red wine—our extended dinner lasted into the night. If memory serves me correctly, we closed the restaurant.

The next morning, at 8:00 a.m., the westbound Zephyr was backing down Track 5, about to couple to our two private railroad cars.

Standing on the station platform on this warm morning, one manicured hand on the handle of her roller bag, the other clutching a Starbucks, Teresa looked wistfully around us: the white canopies casting their cool shadows over the tracks, the dormers of our sumptuous attic room in the Crawford Hotel, the small, elegant patio of Tavernetta, which faces the tracks.

Ahead lay an invigorating private rail car adventure: traveling on a westbound train, crossing the Rockies the first day, the Sierra Nevada Mountains the second. 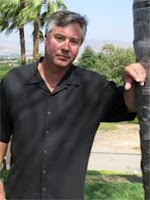 Eric Peterson's debut novel, Life as a Sandwich, was a finalist in the San Diego Book Awards. His most recent book, The Dining Car, won the IBPA Benjamin Franklin Gold Award for Popular Fiction, the San Diego Book Award Gold Medal for Best Published Contemporary Fiction, and the Readers’ Favorite Book Award Silver Medal for Literary Fiction. The story follows a former college football star who signs on as a bartender and personal valet to a legendary food writer and social critic who travels the country by private railroad car.