AMERICANA / HOLIDAY MYSTERIES NOT TO MISS

Here are ten top mystery novels picked by our friends at Strand Magazine.  All have a holidays theme.  Hats off to these detectives, who work during Christmas with the attitude that justice should never sleep, especially if a dingbat President causes the government to shut down.

Hercule Poirot’s Christmas
By Agatha Christie
This wonderful book has all the elements of a great country house murder and what’s more, it’s set during Christmas. Poirot ends up having his holiday ruined when Simeon Lee is found murdered—he was a hateful old badger but the Belgian detective won’t stop until he finds whodunit. This is probably one of the greatest holiday mysteries ever penned, with all the ingredients of a great classic—rounding off the cast is the rest of the Lee family, all of whom had an interest in seeing off the old man, including a very entertaining black sheep of a son!

Maigret’s Christmas
By Georges Simenon
Okay, this isn’t a novel but it’s a delightful collection of short stories featuring the resolute and intrepid Jules Maigret. These stories aren’t that dark, unlike Simenon’s novels (if you can call those tiny books novels), and they show a more compassionate side of the inspector who, despite dealing with the seedy underside of Paris, always manages to show his human side.

“The Adventure of the Blue Carbuncle”
By Sir Arthur Conan Doyle
Reading this short story will have one looking more closely at holiday meals! In this case, a priceless jewel is found in a goose—very unlikely, but if you read the “oddly enough” section of newspapers, you’ll read even stranger stories. In this charming little adventure, Holmes and Watson set about trying to uncover the answer to the vexing question about how the blue carbuncle was fed to a goose—I mean, at that time I doubt the board of health and sanitation existed!

Tied Up in Tinsel
By Ngaio Marsh
Sadly, this book is out of print and despite the recent decline in popularity of Marsh, she still remains one of the grand old dames of the Golden Age of Crime Fiction. In this novel, Inspector Alleyn is called to the scene of the disappearance of one of the guests—one can only hope that after having his holiday ruined, the inspector asked to be paid for overtime!

The Redeemer
By Jo Nesbo
Here we have a contemporary novel that has all the makings of a classic. During a Salvation Army concert, one of the singers is shot and killed. The intrepid and tenacious Harry Hole finds he’s in a heck of a pickle: it’s all well and good to sleuth when you have a suspect, a motive, and some clues—but this time he has none of the above. 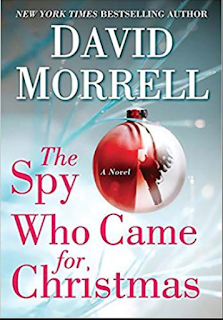 The Spy Who Came for Christmas
By David Morrell
Don’t expect any steaming chimneys, icicles, or snow stained with blood in this thriller by the brilliant David Morrell. This thriller is set in Santa Fe and, you have a story about a baby with some very special powers and a group of ruthless criminals out to find and kidnap this special tot.

Silent Night
By Mary Higgins Clark
Who says that we don’t have a Grand dame of Crime Fiction in the United States who can, with her pen or typewriter, leave readers puzzled, gripped by fear, and begging for more? In this delightful novel, which is set—yes, you guessed it—during the Christmas season, a young boy plays a game of cat-and-mouse with a pickpocket who stole his mom’s wallet. The stakes get very high in this novel by Clark who, after writing dozens of novels, is still going strong!

A Christmas Promise
By Anne Perry
Prolific and yet always delivering a great pot-boiler even if it’s set in Victorian England, Anne Perry provides this evocative and warm little novel that has two girls looking for a donkey, which has been missing since the day one of the girls’ uncle Alf was killed.

Holiday in Death
By J.D. Robb
Yes, the dating world can be frustrating but in Robb’s thriller, it is not only frustrating but deadly. That’s right. Lieutenant Eve Dallas, while searching for clues, finds that a string of homicides is traced to a dating service (so don’t listen to Mom when she tells you to sign up for one of those free online dating service accounts). The culmination of this book is vintage Robb: surprising, chilling, and hopeful.

The Adventure of the Christmas Pudding
By Agatha Christie
Why not end with Dame Agatha? I know after reading the passage about “The Adventure of the Blue Carbuncle,” you’re going to see some similarities between the two stories but trust me—this one is different. Hercule Poirot is celebrating a typical English Christmas and receives a note that reads: “DON’T EAT NONE OF THE PLUM PUDDING. ONE WHO WISHES YOU WELL.”