Washington Irving (April 3, 1783–November 28, 1859) was a writer, essayist, historian, biographer, and diplomat most famous for the short stories "Rip Van Winkle" and "The Legend of Sleepy Hollow." These works were both a part of "The Sketch Book," the collection of short stories that won him international recognition. Washington Irving has been called the father of the American short story because of his early and unique contributions to the form.

Early Life and Education
Washington Irving was born on April 3, 1783, in New York City. His father William was a Scottish-American merchant, and his mother Sarah Sanders was the daughter of an English clergyman. At the time of his birth, the American Revolution was just ending.

His parents were patriotic. His mother said upon the birth of her 11th child, "General] Washington's work is ended and the child shall be named after him." According to Irving biographer Mary Weatherspoon Bowden, "Irving maintained close ties with his family his entire life."

Washington Irving read a great deal as a boy, including "Robinson Crusoe," "Sinbad the Sailor," and "The World Displayed." His formal education consisted of elementary school until he was 16, where he performed without distinction.

Early Writing Career
Irving began writing when he was 19 as a journalist using the pseudonym Jonathan Oldstyle. As a reporter for his brother Peter’s newspaper The Morning Chronicle, he covered Aaron Burr’s treason trial.

Irving traveled widely in Europe from 1804 to 1806 on a "grand tour," paid for by his family. After returning, using the pseudonym Dietrich Knickerbocker, Irving published the 1809 comic history of Dutch life in New York, "A History of New York." Some literary scholars consider this work of burlesque fiction to be his greatest book. He then studied law and he passed the bar in 1807.

Engagement
Washington Irving was engaged to marry Matilda Hoffmann, the daughter of a prominent local family. She died of consumption on April 26, 1809, at the age of 17. Irving never became engaged or married anyone after the tragedy.

This loss indeed scarred his life. In response to an inquiry about why he had never married, Irving wrote in a letter, saying: "For years I could not talk on the subject of this hopeless regret; I could not even mention her name, but her image was continually before me, and I dreamt of her incessantly."

Europe and Literary Acclaim
Irving returned to Europe in 1815 and lived there for 17 years. In 1820, he published "The Sketch Book of Geoffrey Crayon, Gent," a collection of stories including his best-known works, "Rip Van Winkle" and "The Legend of Sleepy Hollow." These stories are thought to be the first examples of the genre of the short story, and they are both gothic and humorous.

Washington Irving in 1820
"The Sketch-Book" was a milestone in American literary history because it was the first piece of American writing to garner European recognition. James Fenimore Cooper was the only other contemporary American writer to receive international acclaim. Later in his life, Irving would encourage the careers of great American authors Nathaniel Hawthorne, Edgar Allen Poe, and Herman Melville.

In 1832 while living in Spain, Irving published "Alhambra," which described the history and stories of Moorish Spain. After a few years back in the United States, Irving returned to Spain, serving as the U.S. minister to Spain from 1842–1845 under President John Tyler.

Other Writing
Irving returned to the United States in 1846 and moved back to his home of Sunnyside in Tarrytown, New York. In his later years, he wrote less fiction. His works include essays, poetry, travel writing, and biography. Over his lifetime, he published biographies of poet Oliver Goldsmith, the prophet Muhammad, and Christopher Columbus.

Irving's contributions to the American idiom include coining the word “Gotham” as a nickname for New York City. Irving was also the first to use the phrase “the almighty dollar.”

Later Years and Death
With his popularity high, Irving kept up with work and correspondence into his 70s. He completed his five-volume biography of his namesake George Washington only eight months before his death.

Washington Irving died of a heart attack in Tarrytown, New York on November 28, 1859. He seemed to foretell his death, as he said before going to bed: "Well, I must arrange my pillows for another weary night! If this could only end!" Irving was, fittingly, buried in Sleepy Hollow Cemetery. 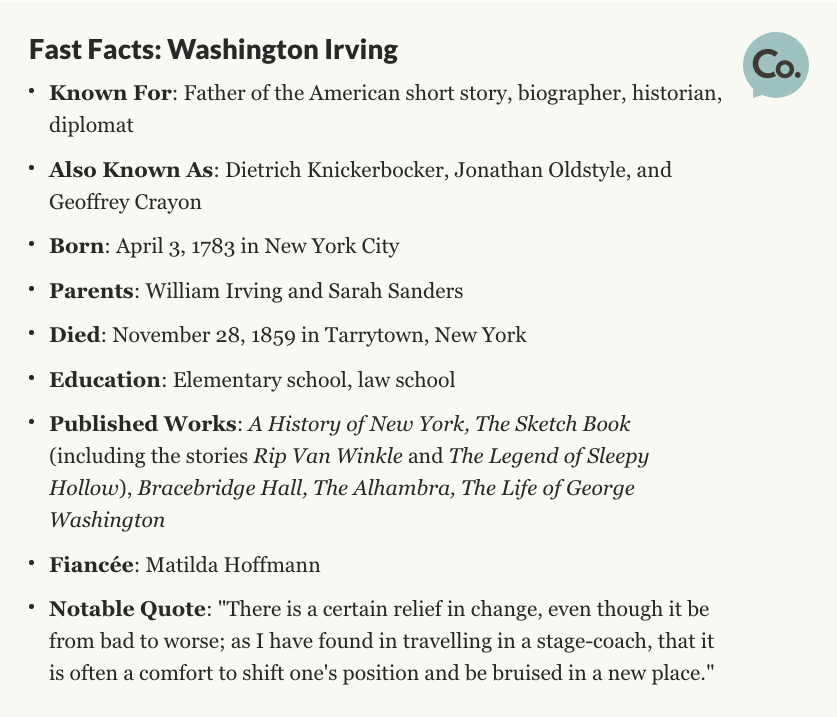 "He made short fiction popular; stripped the prose tale of its didactic elements and made it a literary form solely for entertainment; added richness of atmosphere and unity of tone; added definite locality and actual American scenery and people; brought a peculiar nicety of execution and patient workmanship; added humor and lightness of touch; was original; created characters who are always definite individuals; and endowed the short story with a style that is finished and beautiful."