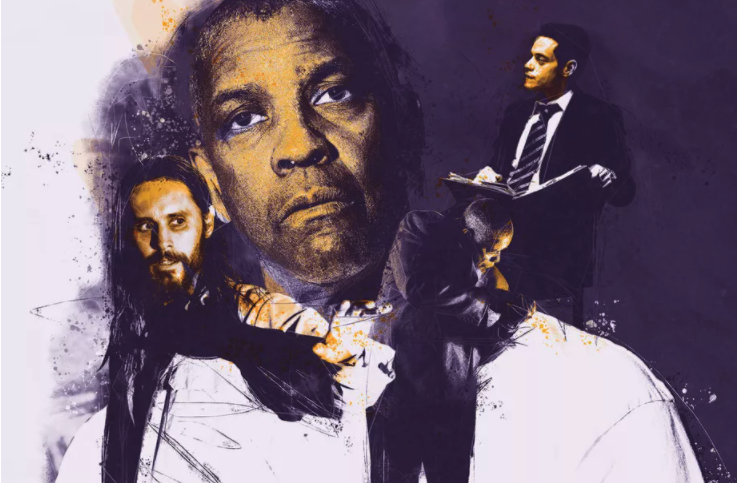 Warning: This article contains major “The Little Things” movie plot spoilers. Save this piece until after you’ve watched the film, or read at your own risk.

WHAT IS THE LITTLE THINGS PLOT ABOUT?

Washington stars as Joe “Deke” Deacon, a local Kern County deputy sheriff who gets called upon to pick up some evidence from the Los Angeles Police Department in the year 1990. Deacon has a reputation in the area, and we later learn it’s because he became consumed by a serial killer case that ruined his health, his marriage, and his career.

For mumbo-jumbo cop jargon reasons, Deacon has to stay in Los Angeles an extra night. That’s all the time he needs to get sucked into a new serial killer case, led by detective Jimmy Baxter (Malek). Deacon cashes in on his vacation days and stays in LA to help Baxter solve the case of a missing girl, in connection to several murders suspected to be the work of a serial killer.

Eventually, they narrow down their suspects to an odd man named Albert (Leto). Both Deacon and Baxter have a gut feeling about Albert, a creepy dude, and a self-professed crime buff. He certainly gives off serial killer vibes. Now they just need evidence. Deacon is convinced he can get the evidence if he gets five minutes in Albert’s apartment, and convinces Baxter to help him break in without a warrant.

When he doesn’t find the smoking gun, this progresses to Deacon and Baxter tailing Albert. Still nothing. But the two authorities remain convinced Albert is guilty.

Albert, realizing that Baxter and Deacon are tailing him, corners Baxter while Deacon is grabbing coffee. Albert tells Baxter he’ll take him to the body of the missing girl. Baxter goes along but makes sure to make it easy for Deacon to follow. Albert drives Baxter to a remote location, hands him a shovel, and tells him to start digging. At the same time, he also tells Baxter he’s never killed anyone in his life.

It’s clear to the audience that Albert is just a weirdo, messing with Baxter, but Baxter clings to the hope that he’ll find evidence. “How can you protect those two beautiful daughters when you can’t even protect one of those poor girls or their families?” He asks. “This will go on and on and on, and there’s nothing you can do about it.” Baxter snaps. He strikes Albert with the shovel, killing him instantly.

When Deacon finally shows up and sees what Baxter has done, he flashes back to the last time he was working on a serial killer case. After discovering three freshly dead bodies in the woods, a trigger-happy Deacon accidentally shot and killed the last victim, startled when he saw her in among the trees.

His friend Flo the coroner (Michael Hyatt), as well as the entire department, covered for him by ruling the victim’s cause of death to be stab wounds, rather than gunfire.

In the present day, Deacon races back to Albert’s apartment, scouring it for evidence that might prove Albert was the killer. He finds nothing.

Then Deacon and Baxter spend all night digging, searching for a body that they never find.

Deacon advises Baxter to go back to his life, take a break from work, and forget about Albert.

WHAT IS THE LITTLE THINGS ENDING, EXPLAINED?

In the movie’s final moments, Baxter, now at home, receives a package. It’s a note from Deacon that reads, “No angels,” a reference to the advice he gave Baxter earlier in the film, and a red barrette.

From Baxter’s perspective, the barrette suggests that Albert really was the killer after all, because that was the one identifying piece of clothing the missing girl’s parents said she was wearing when she disappeared. But then we see Deacon burning the evidence he took from Albert’s house, along with a package of newly-purchased barrettes, suggesting that Albert wasn’t the killer after all. Deacon just bought a new red barrette to make Baxter feel better about killing Albert.

Clearly, Deacon doesn’t want Baxter to be haunted by the same ghosts that he was. The Little Things twist ending completely changes the way we see Denzel Washington’s character. We knew that he was consumed by the need to catch a serial killer, but now we see just how much that obsession clouded his judgment. He had a gut feeling about Albert, but he was wrong.

He and Baxter broke protocol, went around the law, and eventually killed an innocent (albeit extremely creepy and weird) man for nothing. Deacon is not the great detective we’re so used to seeing in crime thrillers. At the moment where Deacon tells Baxter never to go back to Albert’s apartment, he says, “It’s the little things that get you caught.”

Those are the same words he said earlier in the film, only now they sound like the sinister words of a serial killer, rather a hero looking for justice. Makes you think!